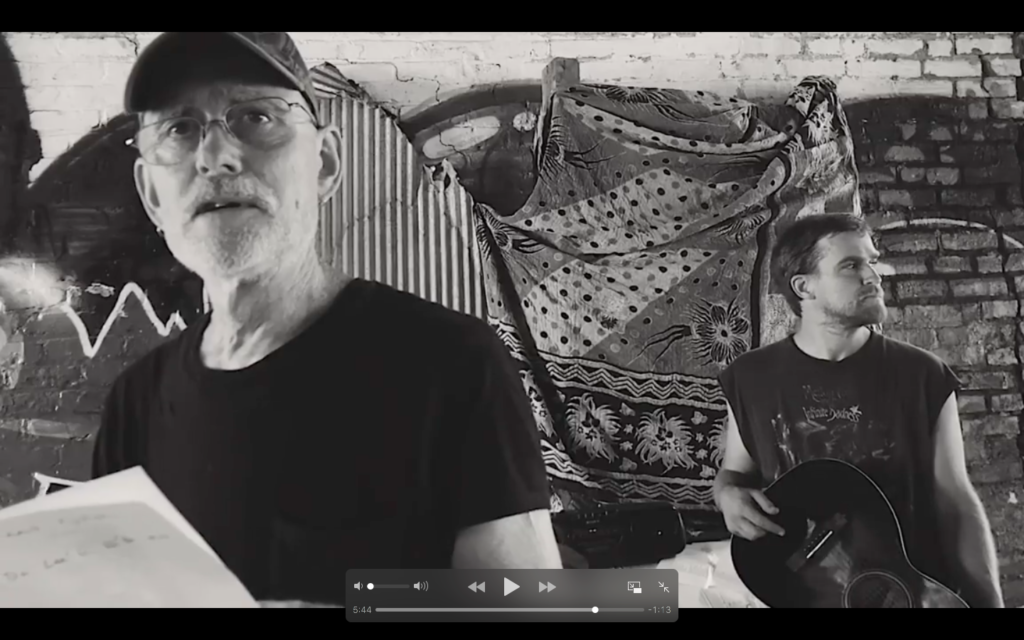 Covid-19, you have done a number on me as a poet!
For that I am cautiously grateful.

I don’t think I can ever get back to
My old pre-Covid relationship to poetry
Even if I wanted to,
Which I’m not sure I do.

The pandemic hasn’t made me a better poet,
However that might be defined.
I’m starting from scratch.
I’m like someone who was laid off
From a twenty-year stint as a machine operator.

I’m still a poet and I have to write.
But now I have a hard time understanding my own poetry.

Covid, see what you did?
You forced me to remember that poetry,
Though it is often used
To express feelings and thoughts and emotions
That can’t be expressed any other way,
In times of upheaval . . . that poetry,
the poetic spirit,
will reflect and embody that upheaval,
Not just in subject and metaphor
But inside and out, from start to finish
Popping rivets, nodding to chaos,
blowing steam, brooding, fasting and falling apart.
Anything less would be less than honest.

Poetry gets bumped up to its survival mode of
Decoding reality.

I’m thinking of a scene in that
1996 epic sci-fi action thriller
Independence Day.
Will Smith, as Captain Steve Hiller,
Is summoned to a
Top secret desert research facility
Where the government has been
Examining an alien space ship,
Analyzing it stem to stern and inside out
To try to figure out how it achieves
Weightless flight that they observed
Before it crash-landed.
They have it braced upright in a frame.
Will Smith borrows a sledge hammer
And knocks out the supports.
Instead of tipping over
The alien ship vibrates to life
And begins to float above the floor.

That’s what happened
During the pandemic
When my poetry crashed and burned.
Out of desperation,
Because nothing else was working for me,
I took a poem that had just crash-landed
And, like Will, I started knocking out
One support after another:
Rhythm,
Internal rhyme, alliteration,
punctuation (bam, bam!),
Continuity of thought,
Thoughtful beginning, gone.
Clever or provoking ending, gone.
Building on metaphors, gone.
One by one, support after support
Was sacrificed
Until the poem was down to little more
Than a shell of what it was.
But instead of falling over in the dust
It vibrated ominously
And held itself up
As if equipped with an internal gyroscope
And then it began to tell me what it wanted,
What it needed.

The poems I have been writing
Since the outbreak
Seem to be compensating for
My lack of productivity
By renewing my sense of wonder
About what a poem is
(And what it isn’t,
Or doesn’t want to be).
I’m just sharing what has been going on for me,
In this unprecedented time.

That person who wrote the way I used to write
Was laid off,
The factory was shut down and abandoned.
How did I wind up in the poetry factory?
It happened very gradually.

When I started writing “modern” poetry
Back in the 1960s
I soon realized that I was writing
Beyond my parents’ ability
To follow me.
I stopped reading my poems to my parents early on
And, for a while, I had no readers,
No fans, no critics.
I just wrote.

Then I discovered poets who wrote
Like I wanted to be writing
And I wrote like them
Imagining that by doing so I was receiving their approval.
I was young enough at the time
To need approval.

I’m not sure when this changed,
When I started finding my voice,
And anyway, that story
Doesn’t belong here.
But finding my voice was coincident with my realization
That I was doing important work.
I was part of a lineage of writers
Who felt the same way.

Poetry ceased to be an academic pursuit.
Poetry was about being free;
Yes, it was about freedom,
Breaking out of self-destructive patterns and,
Refusing to repeat personal history.

Then the next thing I realized at some point was
What constitutes freedom
Changes from time to time,
Era to era.
And then the next big thing I had to learn was
That the kind of poetry I wanted to write
Had to transcend my own psychology.
It couldn’t be neurotic
It couldn’t be heroic.
It couldn’t be even furtively
About me.
It had to be larger than me.
More subtle,
More bad-assed,
More focused,
Smarter,
More intuitive,
And not just metaphorical but symbolic.

It could start where I was stuck
But it couldn’t stay there.
It had to be experimental,
It had to leave me
In my hurting or confused place
To get written.

Symbols are not metaphors,
They are an ancient language
That the psyche uses
To communicate something or reveal something
That is not reducible or suggestive or analogical.
They are “just so”.
They are not made out of imagination
But they are projections of psychic reality.
They are encodings of reality.
Not Reality, capital R.
There are many realities,
Endless realities.
Some are instructive, some are better
Than consensus reality,
Some are worthy of being
Elevated and marketed
As books and films
To filter into the culture-stream,
Some are worthy of being blazoned
Across banners held high
By angry marchers in the street.
Right now we are ready
For a new consensus reality.
The current one shits.

As a dream-worker who has been dreaming
Slightly longer than I have been writing poetry,
Dreaming was already there to inform my poetry.
I like to think of dreams as a kind of living poetry
That is “written” by the psyche.
I have tried to write poems
Mimicking the freedom of dreaming
Without much success
And I’m beginning to think it can’t be done.
I think of a good poem as a collaboration
Between me and my psyche
But that means I have to give up
Exclusive rights to what I am trying to say!

A couple weeks ago I visited my son
In the Hudson Valley.
We spent an afternoon performing
A couple of my more recent poems
In an abandoned factory
On the outskirts of Hudson NY.
It is by a waterfall that you can hear in the background.
He provided interludes of sound
Using a radio and a cassette player.
It wasn’t easy schlepping equipment to the building
Over the periphery of rotten boards,
Rusty metal and old foundations,
Skirting poison ivy and briars,
But the cavernous mill is more or less intact –
Stone walls crumbling, inviting in
Plant life and late afternoon sunlight –
Littered with huge rolls of paper
And the 50-year-old moldering wreckage
Of a, most likely, catastrophic shutdown . . .
The perfect setting for these poems.
I call them fractal because the images
Are fragmentary and seemingly random
But they are not random,
They follow a jagged thread;
A fractal edge
And the units are self-similar.
Here is the link to one titled “Freedom is”:

Epistle IX: Put to the (COVID-19) Test by the National Guard in Pennsylvania

Epidemic Epistle VI:  My trip to Home Depot (Johnny’s so long at the fair)

Epidemic Epistle V: Becoming a Marginalized Person in a Pandemic is Eye-opening

Epidemic Epistle I: A Triage Crisis is Coming, and It’s Personal