Back in 1976, I co-founded, with some Los Angeles colleagues, a feisty little alternative weekly called the L.A. Vanguard. About two months after we launched it, I got tipped off about a program by the local phone companies, Pacific Telephone and GTE, in which they had so-called “Security Departments,” composed of banks of operators, whose sole job was to provide unlisted phone numbers to inquiring government agencies, all without a warrant. As I delved into this story I learned more: these special operators (led in each case by retired FBI officials) were also providing credit information on phone customers on request, and the agencies who had instant access to all this data ranged from local police to the public library.

When we broke the story, it exploded on the Los Angeles media scene. There was a banner headline across the whole top of the Los Angeles Times front page screaming “Unlisted Numbers Given Out.” We at the L.A. Vanguard, to promote our little paper and being guerrilla journalists, announced that we were holding a protest and press conference on the sidewalk in front of the main entrance of the Pacific Telephone building in L.A., at which we’d be handing out copies of our newspaper. We were mobbed by reporters and camera crews from every media organization in the city. It was huge. Pacific Tel’s PR people realized they had to respond and invited everyone inside for an impromptu news conference at which they tried to quell the furor, but they only made it worse by having to admit the scale of the program.

Now I understand that Los Angeles, which is home to more celebrities per square foot than any other place in the world, has a thing about privacy, but this story even went national. It was simply shocking at the time to learn that the phone company would provide police and other government agencies — even the over-due books department of the library! — information about a customer’s sacred unlisted number without even requiring that they first obtain a warrant from a judge.

My investigative exposé led to hearings by the California Public Utilities Commission (PUC), at which the various government agencies were compelled to explain how they used the information they were obtaining from the phone companies and to justify their need for it, and the phone companies were forced to explain why they were so casually releasing the information, and why they were using ratepayers’ money to pay for a special group of operators to provide it. In the end there were restrictions placed by the PUC on the companies and on the number of agencies able to get access to unlisted numbers.

Today, such a story would be seen as quaint. It probably would not even be published in a major newspaper, and I doubt it would even make the first page of the Hollywood Reporter, trade publication for the film industry. Certainly no regulatory agency like the state PUC would bother to hold hearings on it.

The May 29, 1976 front page of the LA Times, picking up a scoop from a local leftist weekly

America has been so degraded as a free society that such intrusive violations of our privacy by a police agency or a librarian are now accepted by most people as normal and to be expected. (Actually, in fairness to librarians, they have emerged lately as some of the last remaining defenders of privacy, often refusing to let nosy police find out what books and videos patrons have been checking out unless served with a warrant.)

Would a major corporate paper today even pick up a story from a left alternative weekly? (LA Times reference to LA Vangard as source of its lead article)

I was driving home to Philadelphia from the Catskills yesterday, on I-476, the northern leg of the Pennsylvania Turnpike, and saw a sign warning that speeders were being monitored from the air, and I immediately thought about drones. When I saw such signs in the past on a highway, I would immediately look up at the sky to see if it was cloudy or clear. If it was blue sky, I’d look for a spotter plane, which you could sometimes find. Cloudy meant that the police would not be up there, as they wouldn’t be able to see us drivers. Today it could easily be a small drone that I wouldn’t even notice doing the monitoring, and it would be using radar to tag speeders, so you’d be vulnerable day or night, rain or shine. 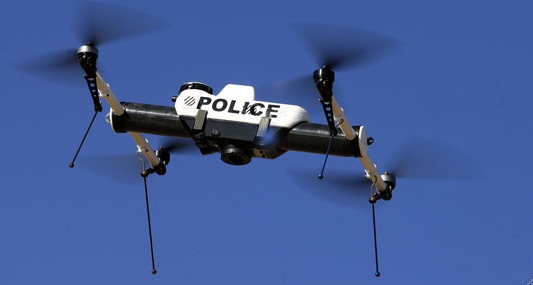 In fact, I’ve noticed that on the 10-mile southernmost stretch of Rt. 309, a local controlled-access highway that runs from past my house and on down to the outskirts of Philadelphia, the state has installed video cams and radar devices that film and monitor the speed of all traffic going into and out of the city on a round-the-clock basis. We are being monitored at all times. So far the state cops or Department of Transportation have not been issuing speeding tickets with these cameras, but it’s only a matter of time. They already have cameras at major intersections all over Philadelphia and are mailing out automated $100 tickets to people alleged to have run red lights.

How far away are we from the day that local authorities in suburbia will be flying drones around the neighborhood tallying up the number of dandelions in people’s yards, and issuing warnings that they need to apply toxic herbicides to kill them or face a fine? You’re laughing? There are already laws in many communities that can compel people to mow their lawns or to clear out their dandelions or face a stiff fine. What they don’t have yet is a cheap way of monitoring people’s lawn-care proclivities. But it’s coming.

What strikes me as I think back to my big scoop about the California phone companies’ unlisted numbers racket (for which I won a major award from the Los Angeles Press Club!), is how much American citizens, over the intervening 36 years, have come to accept all this spying and invasion of privacy as normal, and perhaps even as desirable.

Of course 9-11 is a big part of this. The trumped up “War” on Terror launched in September 2001 has become a justification for all kinds of spying and other police activity, and not just by federal agencies. Even my little town of Upper Dublin has now has got its own SWAT van stuffed with Pentagon-provided military gear; there’s also a “major incident response unit” van, even bigger, which is also stuffed with military weaponry. Meanwhile, every police car in the village is equipped with an M-16, and we have 40 cops to police a quiet town of 26,000. That’s one cop for each 650 people in a town that hasn’t had a homicide in at least five years, that averages three robberies, 400 property offenses, one arson and 90 “alcohol offenses” a year! I don’t know how much surveillance and monitoring our local police do, but I do know that just driving and walking around town here, I see local cops on patrol more often than I used to when I lived in China, a certified police state.

Last fall, during the height of the Occupy Movement, I spent a little time at the Zuccotti Park encampment in lower Manhattan’s financial district. There were more police there than there were demonstrators on two of my visits. That’s how it looked too in the videos and news reports I saw of some of the OWS street actions. That should be as much of a scandal as was the brutish behavior of those cops, with their clubs, their pepper spray, and their other weapons, all deployed against avowedly non-violent political protesters.

But where is the public outrage at all of this?

I’ll admit that our corporate media have really given up being real sources of news. (Just consider that the lead story on the front page of the Philadelphia Inquirer on Monday was “Romney Strongly Defends Israel,” which surely ranks right up there as the ultimate example of dog-bites-man non-news one can imagine! With that sorry level of news judgement it’s no wonder important stories are going unreported) But how can there have been such public and media outrage back in 1976 simply over a news report that the phone company was providing unlisted number information to police on request, and then today, there is almost no concern even at the prospect of police spy drones hovering over our neighborhoods 24/7 taking photos of our every move, and at reports from agency whistleblowers that the National Security Agency is already monitoring the electronic communications of all Americans?

What has happened to the “Land of the Free and the Home of the Brave”?