For two years, starting in 2010, the United States Agency for International Development ran a social networking service — similar to Twitter — for the Cuban people. Its long-term objective was to forment popular revolt against the government and de-stabilize the country.

They called it “ZunZuneo” (Cuban slang for a hummingbird’s “tweet”) and launched it under absolute secrecy about who was really running it. “There will be absolutely no mention of United States government involvement,” according to a 2010 memo from one of the companies supposedly running the service. “This is absolutely crucial for the long-term success of the service and to ensure the success of the mission.”

The “mission” was to reach a critical mass of Cuban users by offering tweets on sports, entertainment and light news over the service and signing recipients up through word of mouth — you call a phone number and your phone is hooked up. With that critical mass in place, the tweets would start getting more political: inspiring Cuban citizens to organize “smart mobs” — mass gatherings called at a moment’s notice to spark a kind of a “Cuban Spring” or, as one USAID document put it, “renegotiate the balance of power between the state and society.” 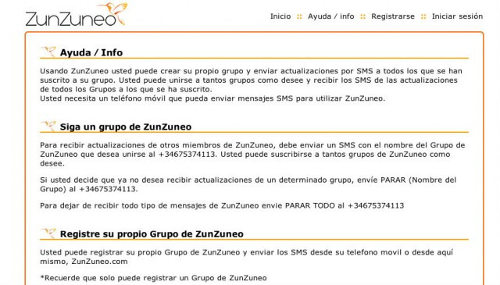 The registration page for the ZunZuneo service

At one point there were 40,000 Cubans getting ZunZuneo tweets but the project was abandoned in 2012 when the initial funding ran out and the people who own the real Twitter refused to take it on.

The story, an investigative report by the Associated Press, is probably not surprising to many people in this country. After the NSA revelations, what could possibly surprise us? And besides, it would not be the first time that USAID was found doing the nefarious work of the CIA and State Department of undermining democratic governments. But it is an embarrassing revelation about how our government is using the Internet and about how “hot” the Cold War still remains.

There are also some serious legal issues.

One of the main organizers of the project — Joe McSpedon of the USAID — met with officials from a variety of fronting “sponsor companies” to launch the project in 2009-2010.

From the start, the program’s objective was clear: to de-stablize the government of Cuba, and destabilizing governments is something the United States is proficient at. There are few areas of the world whose history doesn’t include an attempt, often successful, by United States to overthrow a government. In fact, in Venezuela, Ukraine and various parts of Africa, South America and the “Middle East”, such efforts are currently ongoing. In most of these cases, the propaganda-preparing and deceit-dispensing USAID plays a central role.

But some U.S. Congressional officials seemed to think this went further. Vermont Democrat Senator Patrick Leahy, who chairs the Appropriations Committee’s State Department and Foreign Operations Subcommittee, called the program “dumb, dumb, dumb” today on MSNBC. He denied knowing anything of the program but said that, if he had, “I would have said, ‘What in heaven’s name are you thinking?'”

White House Press Secretary Jay Carney insisted that the government was only thinking of improving Cuban’s lives and had done everything “by the law”.

But that’s questionable. The program’s initial recruitment drive was based on a list of a half million Cuban cellphone users apparently stolen from Cuba’s most prominent cellphone company. An employee of that company apparently gave up the information to USAID. Those are stolen phone numbers and also involved an invasion of privacy, which is illegal under any law.

The USAID staffers also set up a series of “front” companies in Spain, Mexico and possibly other countries, to act as the new service’s sponsors. The service, with those companies displaying phony ads and messages on its website, then texted the half million stolen numbers with an offer to join up. That goes way beyond “false advertising” and is absolutely illegal in most countries, including the United States.

Finally, there is the intent of the program (the real reason that USAID wanted to hide its role). You can insult other leaders and even threaten them under international law, but you can not, ever, intervene to overthrow another country’s government. That the United States does this all the time only means that it’s breaking the law all the time.

The exposure of the Zunzuneo story is likely to lead to a new look at the role of USAID in other parts of the world where there are seemingly “popular” risings against elected governments, such as Ukraine and Venezuela.

The truth is that this Zunzuneo program actually addressed a real need, or at least took advantage of one. Cuban communications officials have been reluctant to open Internet access to the country. Then there are the problems of a still developing infrastructure (electricity and phone wires are still in scarce supply). Plus there is the lack of home computers, which only exascerbates the problem. With cell phones now available to many Cubans, the thirst for an information source over the Internet is increasingly being felt.

Which is one good reason many other Latin American leaders, some of them friends of Cuba, are advising the Cuban government to make connectivity a priority in their country. Without an on-line connection to the rest of the world, exploitative criminals like those at the USAID can’t make their moves.