If it surprises you that one of the kings of the corporate Internet would repeat a slogan used by Internet activists to mobilize against companies like his, examine the context. Zuckerberg made his remark to support and explain a new set of Facebook strategies that will, if successful, put the world’s Internet connectivity under his company’s control.

It’s called internet.org which is not only a real website but a consortium of companies and government agencies Facebook is leading. The very name — “internet.org” — also provides a glimpse of Facebook’s intentions. 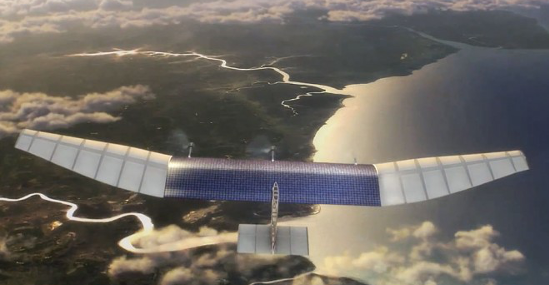 Using a combination of drones, satellites and other technologies, Facebook seeks to bring connectivity to the entire world. The picture is remarkable: Facebook satellites and drones with six month life cycles will bounce every connection signals (like Wify) to people in every corner of the earth. Every human being will now have access to the Internet.

On its face, it’s a wonderful idea until you realize that this would put all the world’s connectivity in the hands of one company and a coalition of partners it’s brought on to realize the project. Those partners, by the way, include — are you ready? — the National Security Agency of the United States.

Zuckerberg reminds us that this isn’t imminent; it’s a project for what he calls “the far-off future”. But he doesn’t explain how far off “far-off” is. Connectivity projects are a process and portions of the world would be progressively “hooked up”. In fact, his company has already invested $1 billion in the project and, he says, will continuously invest a lot more.

The people of the world are, Zuckerberg says, “…going to use it to decide what kind of government they want, get access to healthcare for the first time ever, connect with family hundreds of miles away that they haven’t seen in decades.”

The Facebook announcements followed by a year an announcement by Google that it’s researching how to use huge balloons to bring the Internet to the world or at least to remote locations in it. Google calls it “Project Loon”.

The obscene irony in using drone technology (used, among many other things, to kill thousands of people a year) to bring the human race together is offensive, but the very real threat posed by putting most people’s communications in the hands of one company is deeply disturbing. To grasp that threat and the reason behind these initiatives, one must understand that this is a corporate response to a very real problem.

If you live in the United States (or one of what are commonly called “developed countries), most people you know are probably connected in some way to the Internet. In fact, over 70 percent of the households in this country are Internet- capable. The same is roughly true of Canada, much of Europe, Japan and the People’s Republic of China. But Africa is a different story: only 7 percent are connected there. Latin America varies with about 30 percent of Mexico connected, 60 percent in Brazil (one of the leading Internet countries) and about 55 percent in Venezuela, but less than 20 percent in most of the other countries. Besides China and Japan, Asia , at under 20 percent connected, is almost as unconnected as Africa.

(Here’s an interactive map with the precise numbers by country.)

The implications of the problem are obvious: people can’t communicate in those places like they can here and that frustrates the very purpose of the Internet, curtailing the possibilities it provides for collaboration and social change.

The reasons for the problem are just as obvious. For one thing, technology is hampered by under-developed infrastructure — the absence of the electricity and telephone wires we take for granted and that the Internet thrives on. Additionally, governments in many of these countries are reluctant to prioritize communications — often for obvious reasons, since a communicating population often overthrows bad governments. Finally, there are tight and restrictive controls placed on these regions by the communications companies that serve them. Nobody is looking to expand the Internet very aggressively in much of the world.

That’s a problem for most us but it’s a different kind of problem for Facebook. While activists and organizers see the problem as an impediment to organizing, Facebook sees the problem in terms of market. Right now, the ubiquitous social networking giant has about a billion people signed up. If you don’t think that’s marketing gold, consider the fact that Zuckerman’s stock in Facebook is now worth about $3 billion. But capitalists don’t sit around counting their money like Mafia chieftans; they look for ways to make more of it. If Facebook is going to expand its user-base, and to cash in on the advertising revenues those numbers generate, it has to look to the rest of the world. To do that, it has to put the rest of the world on-line.

While the intent is the same, the reasons underscore the divergence in potential outcomes. If you connect a population to the Internet, and it depends on that connection, your ability to turn it off gives you virtually dictatorial powers. Governments in some countries have, in the recent past, shut off portions of the Internet to their populations — a means of political control or for the quashing of growing social movements. Activists can get around those restrictions using other lines of communication or other systems…provided they can access them. But it one company can stop all access, that option for free communication is gone.

But the more pressing problem is in terms of content delivery. With the recent court decision on Net Neutrality, a providing company has power to provide fuller access to some sites and to slow access to others. It can now, under the law, simply deny access to certain content to its users. When a company controls access for 10 million users (like Comcast, for instance), the outcome is horrible. But when a company controls access for several billion, it’s devastating.

What’s even more disturbing is who Facebook is partnering with. What in the world is the NSA doing as part of this “connect the world” coalition? Facebook will only say the NSA is working on research to use its satellite system to expand connectivity. But if the agency is handling that chunk of connectivity, what will that mean for people’s privacy and rights?

The NSA spies on everyone it can. It collects all the data it can. It has shown no respect for people’s rights or for constitutional restrictions. It is a criminal organization and, under this plan, it would control Internet access for large parts of the world.

Are all these horrors coming to fruition?

Many “experts” and pundits would caution us against being paranoid. The project is far off from completion although the technology for it is actually feasible and could be put in place in a couple of years. You have to negotiate with countries and other companies and all that takes time, as several technology columnists have pointed out.

But if you have that kind of power, negotiations can be scaled down to a matter of money — a fee paid to any specific government and, in this technology world, money talks. How may cash-starved developing country governments, offered usage fees and basic “authority” over their people’s connectivity, are going to turn down an offer to put their population on line? All Facebook would have to do is assure a government some basic “control”.

Besides, since the program can be incrementally realized, Facebook can prioritize certain sections of the world over others. One can only imagine the problems that would produce.

In the end, though, whether the company would do any or all of this or not isn’t the issue. We structure our rights to make sure that decisions about them are never in the hands of one person or one institution. If connectivity is, as Zuckerberg says, “a human right”, then it should never be up to him or his company to decide who among us has it, how and when.