Anyone who has ever questioned the Iraq War and Dick Cheney as a vice president expropriating power as second banana to a shallow man ill-equipped to lead anything has to see the Adam McKay film Vice. It’s nothing short of incredible. The filmmaker has created a hybrid genre that’s part narrative, part essay; most important, it’s extremely entertaining with just the right elements of satire, horror and tragedy. While it’s clearly driven by a disdain for its protagonist, it’s not reductive and presents a fully human, three-dimensional dramatic character. McKay’s point seems to be, this is serious stuff for all Americans and we ought to give it a lot more thought than we did as it was unfolding. Especially now, when we have a president with unquestioned, in-your-face authoritarian instincts. 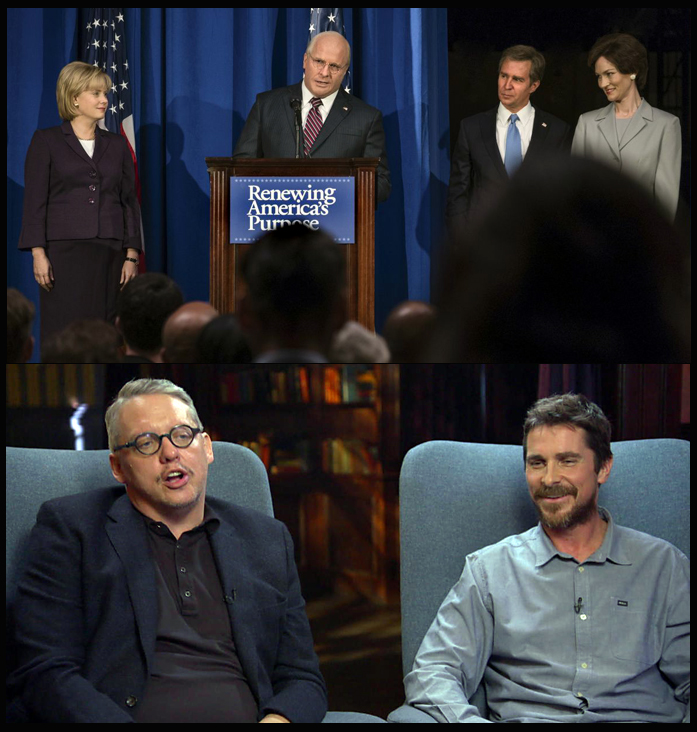 McKay began as a Saturday Night Live writer and went on to make films like Anchorman with Will Ferrell, with whom he made at least five films. As McKay did in The Big Short – the first serious film he directed without Will Ferrell – in this internet, i-phone age of interactive, touch-screen communication, he likes to use bold and ironic graphics to advance his tale. Perhaps his most creative touch is the use of visual metaphors – quick images of predatory animals, a drawing by Goya from his Disasters of War series, a precarious, wobbling stack of teacups and saucers, a still of golfers playing with a backdrop of a raging California forest fire – popped in the middle of a playing-out scene like modifying literary metaphors. It feels unorthodox, but it seems to hark back to the basic Eisenstein montage theory of juxtaposing images to establish complex emotions quickly. It certainly does that, creating a rich stew of images for the brain to chew on.

McKay wrote the screenplay, which begins in Cheney’s youthful, wild days of drunken rowdiness where he’s a man headed off the rails. His wife Lynne reads him the riot act: Straighten up or it’s goodbye, Dick. She tells him she didn’t sign on to be the wife of an asshole like her abusive father, who the film virtually indicts for the drowning death of Lynne’s mother. Thanks to wife Lynne, Dick turns to the pursuit of Power, which as they say, made all the difference. There is a wonderful scene later in the film where — in bed and played like late-in-a-marriage foreplay — the two erotically recite an exchange between Shakespeare’s MacBeth and his famously ambitious Lady. It’s both funny and very serious.

At the center of the film is the idea of an authoritarian presidency, based on the early arguments of a young, pre-Supreme Court Antonin Scalia and others who read clauses in the US Constitution as justifying the notion — something we’ve heard echoed lately under President Trump — that whatever the president does is legal. The nondescript, bland Cheney is the walking manifestation of this idea. As we watch him insinuate himself into every nook and cranny that might advance his power, his Lady MacBeth is always behind him tending to their beloved girls and egging him on breathlessly. This is the pattern from the moment he gets his first windowless office in the White House under Richard Nixon to the September 11th moment when, on his own volition, he assumes presidential decision-making power. At his side throughout – that is, until Cheney cold-bloodedly throws him over the side when the Iraq War goes south – is Donald Rumsfeld, played as another power-hungry bastard, this one always cheerful, always laughing.

The acting in the film complements the screenplay wonderfully. First off, Christian Bale as Cheney is a tour-de-force of make-up and acting chops to marvel at. Without making it at all a caricature, he has the Cheney B-western-bad-guy sneer down. His Dick Cheney is never cartoonish or less than a full human being worthy of respect for that simple fact. Some viewers have apparently found this distasteful, that he should be more of a two-dimensional monster to fit the hate-filled vitriol many of us sometimes like to indulge in – myself included. That would be agitprop, while this film aims for art. To me, the Cheney character’s humanity makes the film one that will likely last, a film we’ll be watching 30 years from now to marvel at the period. Rumsfeld is played by Steve Carell as Cheney’s power-hungry mentor turned subordinate, a man who doesn’t seem to take anything seriously except the machinations necessary to advance his own power. Amy Adams cuts to the bone as Lynne Cheney, the Lady MacBeth in a tragedy in which the play’s protagonist does not die at the end. Because in this tragedy, it’s the moral compass of the nation itself that suffers the tragic fall. The film features a large cast asked to play a wide range of real political figures from the Nixon to the Obama years; they all work as a clockwork-like ensemble in McKay’s frenetic mix.

Sam Rockwell as George W. Bush is an important minor character in the drama itself; but crucial to the tragedy, Bush the son is also a minor character in the  real-life story being told of Power in the highest reaches of the American government. Rockwell’s Bush is a lightweight, who, due to his own incapacity, allows the power-hungry Cheney to rule from behind him in his shadow. How a vice president – usually, as Lynne Cheney frets, a silly, powerless nothing of a job not worthy of her husband – becomes the virtual president in key foreign policy areas like the Iraq War is detailed by McKay in an incredibly lucid fashion that makes perfect sense, knowing what we know. After the 2000 election fiasco, his boss clueless, Cheney hits the ground running, placing himself cynically and furtively into power centers across Washington DC where he proceeds to manipulate national fears and insecurities.

And he does it all for us.

Toward the end of the film, in one of McKay’s gutsy breaks with narrative tradition, he has Cheney, in a scene where he’s being interviewed by Martha Radditz, turn to the camera and, talking to us the audience, defend himself for all the terrible things we the audience have, by then he’s sure, damned him for. At this point, he has a new heart that serves him just fine as a replacement for the old one that conked out. The point he makes to us is that he doesn’t give a shit what we think. From what I’ve seen of Dick Cheney lately, it feels very true to the real man. He’s an amoral survivor. And he’s convinced himself for his own advantage that, whether we appreciate it or not, he did it all for us.

The new heart becomes one of McKay’s longer, ruminating metaphors. The camera lingers long in the operating room on the abyss-like, dark cavity of Cheney’s open chest as it awaits the new heart — as the next shot holds in a close-up on the old, worn-out Cheney heart resting off to the side on a table, soon, we anticipate, to be tossed out as biological waste. The question hovers over the scene: What exactly does it mean to replace the blood pumping organ traditionally associated by poets with feeling and humanity? In Cheney’s case, it seems to mean nothing other than extended his life and power. 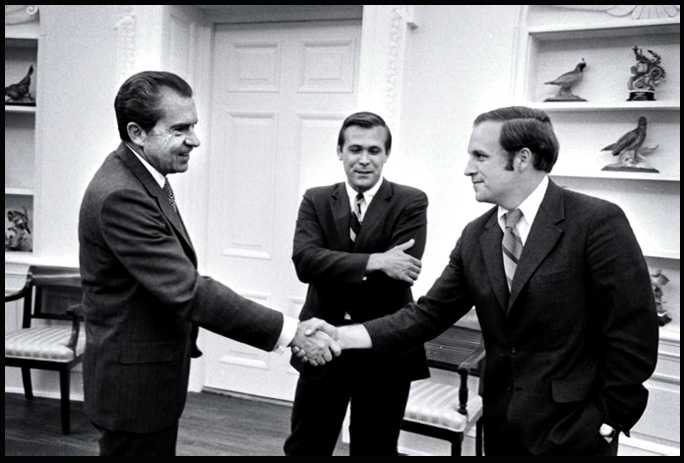 [Nixon being introduced to Dick Cheney by Donald Rumsfeld]

McKay opens his film with a disclaimer that provokes audience laughter due to the use of an obscene popular adjective; I was even moved to clap. In essence, the filmmaker says he tried his best to keep the story true to the facts, but that some creative liberty was necessary. Why? Because many of the facts were hidden, given his protagonist is such a dishonest, secrecy-obsessed individual. McKay had no choice but to fill in with educated imagination. I’ve long been of the school this posture is exactly what’s required in the “post-truth” times we live in, a time when information is ever more controlled and locked away from democratic public access by institutions with greater and greater power over our lives. Creative imagination becomes a tool to leap institutional barriers and to burrow into the devious hearts of cold-blooded bastards like Dick Cheney . . . no matter whose actual beating heart resides inside his chest and pumps blood to his self-proclaimed “dark side” mind.

Art often takes a misleading, sometimes cryptic, view of intense, fraught current events. Consider examples like the wonderfully dark and absurd film M.A.S.H. about a combat hospital during the Korean War – addressing elliptically an audience caught up in the on-going and controversial Vietnam War. The Chilean novelist Ariel Dorfman wrote a novel called Widows about a cruel, bloody authoritarian regime in Greece; while it was obvious to anyone who got it that the novel was about his beloved nation of Chile under the cold-blooded Pinochet regime. There are many examples of this. McKay’s serio-comic film on Dick Cheney feels a little like this. Donald Trump’s image as a young real estate tycoon flashes on the screen once very quickly as one of McKay’s many fleeting visual metaphors. But the disturbing notion of authoritarianism blossoming at the pinnacle of power in a presumably democratic nation permeates this narrative/essay film. I’m sure I was not the only viewer thinking a lot about a President Donald Trump in the White House.

If Dick Cheney and Donald Trump had their way, films like Vice would never be made. Let’s hope in the future real democracy makes a comeback from the sorry excuse for it we have today and some brilliant filmmaker now in eighth grade somewhere will make a rollicking good tragic-satire on the Trump ascendancy and its ridiculous, short reign.