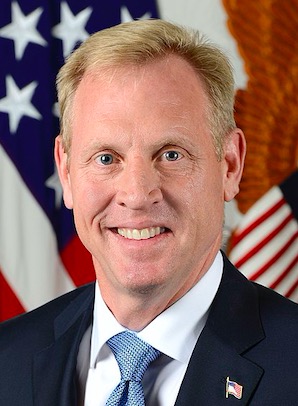 If you said, “Shanahan who?” welcome to the club. This was about as invisible a bureaucrat as you could imagine. And little wonder. Shanahan is a guy who, like the president who nominated him to his post as the number two civilian leader of the Pentagon, has never served in the military, and whose experience prior to that was basically as a middle management cog at Boeing.  His positions there included vice president and general manager of several Boeing operations and, as a career peak, senior vice president of supply chain operations.

Now I’m the last person to claim that someone running what should, in all honesty, be still called the US War Department instead of the absurdly euphemistic Defense Department, ought to come to the job having had some experience in the military. Still, all in all this seems to be a pretty thin resume for a guy taking charge of the agency that accounts for more than half off all discretionary spending by the federal government, and  who is charged with advising the president on key issues relating to national security.

Shanahan, in his brief role as Deputy Secretary of War/Defense,  was dragged out of his bureaucratic obscurity only once, as far as I can tell, and that was on November 15, when he held a press conference to announce that the Pentagon had failed its first-ever outside audit.  (I guess Mad-Dog Mattis wasn’t mad enough to want to have to take responsibility for that embarrassing debacle.)

As I reported at the time in the lead paragraph of my cover story in the current issue of the Nation Magazine headlined: “Exposing the Pentagon’s Massive Accounting Fraud,” Shanahan told the assembled media scrum, “We failed the audit, but we never expected to pass it.”  He went on to claim that the Pentagon should actually get credit for trying, saying, “It was an audit on a $2.7-trillion organization, so the fact that we did the audit is substantial.”

Shanahan managed, with the assistance of a friendly press corps who were either inappropriately polite or simply historically ignorant, to cover up the reality that the Pentagon had actually been forced by Congress to finally submit to an attempted audit by 1200 auditors from the nation’s leading audit firms after 27 years of stonewalling a Congressional mandate to develop an auditable set of books.

Like all his predecessors in the leadership of the Pentagon dating back to 1990, when Congress passed the CFO Act requiring all federal departments and agencies to have auditable books and regular outside audits, Shanahan did his best during his short tenure to avoid making the Pentagon’s budget and spending record transparent and understandable.

You can sort of understand why Shanahan would be just as happy leaving Pentagon financial statements opaque. It turns out his main accomplishment working in the shadow of his boss, Sec. Mattis, for two years  has been successfully pushing the DOD to buy over $20 billion worth of stuff from his former employer, Boeing — stuff that according to the Daily Beast, the Pentagon didn’t even want, like $7 billion worth of aerial refueling drones, $1.5 billion worth of upgraded, but still obsolete (Boeing) F-15X fighters, $2.4 billion for helicopter maintenance and $9 billion for Navy training jets.

The reality is that under Shanahan and his soon-to-be-cashiered boss Sec. Mattis,  as under prior Pentagon leaders, neither Congress nor any inquisitive media (if there still are any), nor any of us taxpayers have the remotest idea how the Pentagon spends the astonishing trillion or so dollars that are annually shoveled its way by the US Treasury Department, and that’s the whole point of keeping the budget totally opaque and filled with purely fake numbers called, in the Pentagon’s darkly humorous jargon, “plugs.”  Nor, it would appear, does this guy who is so ready to excuse himself and the department for this abject and apparently willful failure at a first audit exercise, plan to let us learn more in the future.

Probably the best thing that can be said about Acting Secretary Shanahan is that he probably won’t be top dog at the Pentagon for long. President Trump is no doubt poring through his ever briefer list of potential cabinet candidates willing to work for such a mercurial, egotistical and buck-passing chief executive, trying to find someone he can persuade to be permanent (sort of) Secretary of Defense (sic).

At this point, if it were serious about finding out how the Pentagon really spends all its money, Congress would be demanding that the president nominate a leading accountant for the post of Pentagon Secretary.

Meanwhile all we’ve got running the place is a guy who made light of the biggest audit failure in the history of accounting, and then tried to get credit for simply allowing outsiders to look at the colossal and indecipherable mess that passes for the Pentagon’s bookkeeping before throwing up their hands and saying an audit couldn’t be done.

The CEO and CFO of Enron both did hard prison time for a much less dramatic accounting fiasco. Shanahan got promoted.

We're Tired of This T***p! End the White House Trumpery!
[caption id="attachment_5560" align="alignnone" width="750"] Drawing is by illustrator Andy Myer and is open source free to use with credit. (Click here or on the drawing above to visit AndyMyer.com)[/caption]  …
All Dave LIndorff's Posts