The single most important thing that happened last night when the US military on President Trump’s orders launched a wave of over 100 cruise missiles against Syria was that once again the US violated the most profound international law of war: initiating a war of aggression against a nation that posed no threat, imminent or otherwise, to the US or its allies.

Called a “Crime against Peace,” this violation (whose perpetrators, under the precedent set in the Nuremberg Trials that followed World War II, can face capital punishment), is considered worse than any other war crime because, as US Nuremberg prosecutor Robert Jackson explained in his argument at the Nuremberg Trials of Nazi war criminals, a war of aggression is “not only an international crime; it is the supreme international crime differing only from other war crimes in that it contains within itself the accumulated evil of the whole.”

President Trump, during his televised White House announcement just after the launching of his bombing attack on Syria, said, “The purpose of our actions tonight is to establish a strong deterrent against the production, spread and use of chemical weapons…We are prepared to sustain this response until the Syrian regime stops its use of prohibited chemical agents.”

He was making the argument that the US, acting on its own authority without any sanction from the UN Security Council as required under international law, somehow had a duty to, on its own, punish Syria for its alleged violation of a Geneva Convention against the use of chemical weapons. 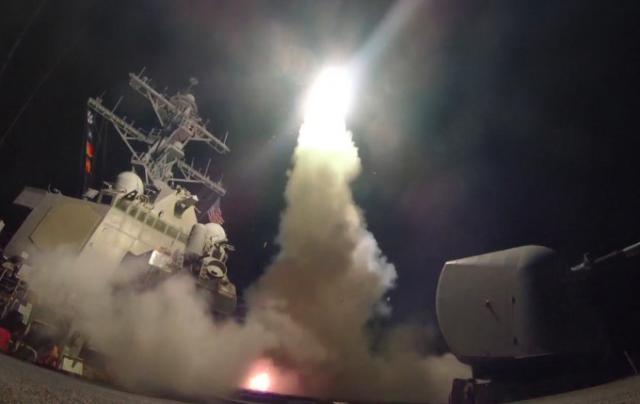 US destroyer launching cruise missile at Syria (US Navy photo)

Putting aside for a moment the important question of whether the Syrian government actually did use chemical weapons in the Douma suburb of Damascus, which is in fact highly suspect, even if that country’s leader, Basher al Assad, did order the use of a banned chemical weapon, Assad’s crime would be far less serious than the crime Trump and the US perpetrated under international law.

Fortunately, it appears as if saner members of the largely crazy Trump administration — notably Secretary of Defense James Mattis, a retired four-star Marine general — prevailed over the neoconservative warmongering chicken hawk John Bolton, recently ensconced in the ever-changing National Security Advisor spot, with the result that the much ballyhooed US cruise missile attack on Syria’s purported “chemical arms infrastructure” was limited to three sites.

More importantly, earlier talk of hitting “command-and-control” centers like government buildings in Damascus, or Syrian air bases — places where Russia had warned that it had its own military personnel and that could have provoked a Russia military response — was pushed aside and such targets were left off the hit list. That meant the risk, about which Mattis pointedly warned in recent days, of this US attack morphing uncontrollably into a war between the two nuclear superpowers operating in Syria, the US and Russia, was minimized.

Fortunately too, for the Syrian people in target areas of the US cruise missiles and the handful of missiles launched by America’s two willing “allies,” Britain and France (whose participation was meant to give a sheen of “multilateralism” to the crime), at least some reports including from Russia claim that up to two-thirds of the US missiles launched were knocked down or blown up in the air by Syrian anti-missile defenses.

So we aren’t facing the threat of a nuclear exchange, or a tense period in which US and Russian soldiers and airmen face each other with tense fingers on triggers in the midst of the Syrian conflict.

The question is what happens next.

First there needs to be a real investigation, official and by real journalists — the thing that should have happened before Trump jumped in with his blustery missile attack (as he Tweeted: “Russia vows to shoot down any and all missiles fired at Syria. Get ready Russia, because they will be coming, nice and new and “smart!”) — into whether there was a chemical attack at all on April 7 in the suburb of Douma, and if so, who was behind it.

The claim of an attack is being made by the so-called “White Hats,” a supposedly non-governmental medical aid organization backed and funded by the US and founded by a member of British intelligence which reportedly has links with the Al Nusra terrorist organization in Syria. The Syrian Red Crescent organization which is affiliated with the Red Cross and has a much better reputation as both an aid organization and as a non-partisan truly medical service, has not confirmed a chemical attack. Meanwhile, the Russian television service RT is reporting that the White Hats actually rushed into a Damascus hospital where victims of fighting in Gouda were being treated, and set off a panic among patients by shouting “chemicals, chemicals!” and dousing people with water, leading to the charge of a chemical attack. Russia is also claiming that British intelligence agents were behind the staging of the event.

Many critics are noting that, as in prior questionable cases of the Syrian government being accused of using banned chemical weapons, this one occurred not when the government was losing and in a desperate situation, but when it was close to winning control of an area and was really in the “mopping up” phase. Indeed, rebel fighters had already given up and were availing themselves of an evacuation agreement, boarding chartered buses to take them to a safer area in the north of Syria, when the alleged “attack” occurred. (Why one has to wonder, would Assad have launched a chemical attack in that situation, knowing it would provoke another US military response? It makes no sense.)

It is also suspicious that the UN had already ordered inspectors from the Organization for the Prohibition of Chemical Weapons (OPCW) to go to the site of the alleged attack to look for evidence of chemical use, but the Trump administration couldn’t even wait the four days it would take them to get there to launch an attack — an attack that is bound to delay their arrival and make finding that evidence increasingly difficult and problematic.

It is also significant that the OPCW has been instructed only to search for evidence of chemical weapons use, not to determine blame for its use.

The danger of course, is that if the Syrian government has not been the perpetrator of this or earlier gas attacks, as some investigative reporters like Robert Sheer have claimed, those who would then likely be responsible — the anti-Assad rebel forces — could be encouraged by this attack and the one Trump launched last year after a similar questionable use of chemical weaons, to launch more such faked Syrian attacks, in hopes of luring the US deeper into the Syrian civil war quagmire.

Obviously, such concerns are not being even considered at the White House. Indeed, if this contrarian line of reasoning is correct, it would be more likely that the US and its allies, Britain and France, are involved in the planning of such “false flag” attacks on civilians.

The US media, are largely cheerleading this attack, with reporters asking for details about its success at hitting alleged targets of Syrian chemical weapons storage, manufacture and research, instead of demanding answers as to the attack’s legality. When the decision to launch the attacks is questioned at all, it is not its obvious violation of international law that is raised, but the far subordinate question of whether the president has the right to order such an attack on his own, without the prior approval of Congress. While that is certainly an important question for Americans to ask, given that there was and is no imminent threat of Syria attacking the US or US forces (which in any case are in Syria illegally), it would hardly be any better if Congress did declare war on Syria, since that too would be a war crime under international law.

Clearly we are now in a very dangerous period, with a president, unconstrained by a Congress controlled by his own party, at the same time facing grave and mounting legal threats to his presidency. He is clearly looking at ways to divert media attention from himself and his own criminal behavior and to get an increasingly restive public to rally ‘round the flag and around himself as “commander in chief” of a nation at war.