It was a beautiful sunny Spring day yesterday in Philadelphia, birthplace of the United States. Crowds of people took advantage of temperatures that were in the ’80s for the second day in a row to stroll the streets of Center City, shopping and patronizing the various restaurants and coffee shops. The only sign that the US had just attacked the capital of another Middle East country with a shock-and-awe blitz of cruise missiles was a small group of Marxist protesters gamely standing in a line along 15th Street on the west side of City Hall, holding up signs criticizing the attack on Syria and pointing out how US military spending and endless wars are robbing schools, health care and other human needs of funding.

The hastily arranged protest by several dozen activists was not derided by the strolling tourists and passing drivers so much as it was simply ignored like a part of the scenery. 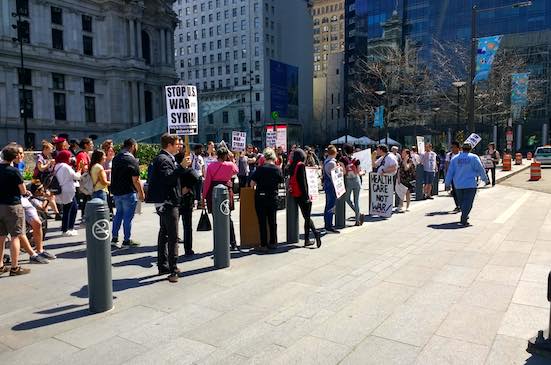 Totally missing was any protest action by the larger peace and justice organizations like United for Peace & Justice or groups like MOVE or True Blue Democrats — the ones that are now calling themselves the “Resistance” to President Trump. Indeed, the so-called Resistance has been seeking pledges from supporters to come out on the street the moment Trump tries to fire special counsel Robert Mueller. Obviously the organization has a huge mailing list, but it sure didn’t use it to call people to action in protest of Trump’s criminal launching of an attack on Syria, ostensibly intended to “punish” Syrian leader Barhar Al-Assad for an alleged, but not proven, chemical attack on Douma, a suburb of Damascus on April 7.

How could such organizations have taken action? The Democratic Party “leaders” of this “Resistance” — people like Sen. Chuck Schumer (D-NY) were actually cheering the Trump attack on Syria, as were many other Democratic members of Congress who keep talking about “resisting” Trump. Even Sen. Bernie Sanders was just demanding that the president first get Congressional approval before attacking.

Never mind that the attack on Syria was both a major war crime under the UN Charter, a treaty drawn up largely by the US, approved by the US Senate and signed into law in 1945, or that Trump had absolutely no authority under the Constitution to launch the attack, since Syria posed no threat, imminent or otherwise, to the US or its allies.

It’s almost as if the attitude among the broader “Resistance” movement against Trump just went, “Phew, that’s over. At least he didn’t attack the Russians and get us into WWIII!” 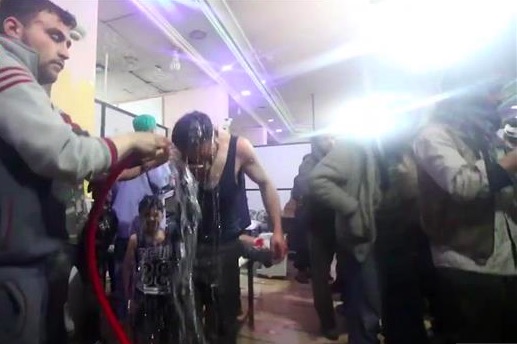 The response of the American public, save for a few dedicated soulslike those gathered at the City Hall protest in Philly, has been largely ho-hum. Uptown a bit at Temple University, students were strolling around the campus also enjoying the nice weather, some of them completely unaware that their nation had just launched a major attack on another country. There was no sign of protest there either. Indeed, a Google search for protest only turned up events relating to the earlier threats of action or to last year’s launching of a smaller cruise missile attack on Syria by Trump. There were protests planned for today, and a few around the country for yesterday, but really one had to look abroad to Greece to find an example of a major protest against the attack on Syria, even though the US was joined by token forces from the UK and France, both members of NATO and the European Union.

We seem to have slipped into a situation like Orwell’s 1984 in which the US government can simply say that war is peace, as the Trump administration is currently doing (claiming that it is committed to seeking a diplomatic solution to the civil war tearing Syria apart even as it trains and funds terrorist groups in that country and launches bombing blitzes into its cities), and the public just go about their business as though nothing is happening.

Of course this is nothing new. Even as Trump decries the alleged but unproven deaths of a few dozen “women and children” in the still unproven “gas attack” in Douma, blame for which — if it occurred at all — has not been determined, the US has been the primary supplier of weapons, including deadly cluster bombs, and the jets to deliver them, to Saudi Arabia for its now years-long deadly bombing campaign against the people of Yemen, the poorest country in the Middle East. That country’s women and children have been dying by the thousands now for several years in this one-sided US-backed war. They’re dying both directly from the made-in-America bombs being dropped by Saudi forces, and from an epic cholera epidemic and starvation that are the result of the destruction of the country’s infrastructure — all of this with hardly a murmur of protest from the American people. 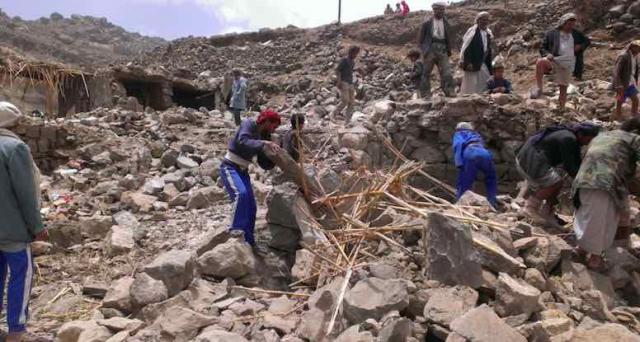 The US media bear much of the blame of course. Prior to Trump’s cruise missile attack on Syria, the nation’s leading news organizations were awash in editorials calling for action, and were running propaganda photos and video images of allegedly poisoned victims (who looked surprisingly healthy). Meanwhile one struggles to find any reportage on the US role in perpetuating the ongoing horror of Saudi Arabia’s war on Yemen. In fact, it’s much easier to find a report about Yemen when that country’s embattled Houti fighters manage to launch a retaliatory missile into Saudi Arabia than about the daily carnage caused by Saudi bombings of civilian targets in Yemen.

The decision by President Richard Nixon, in 1973, to end the military draft in the US and to convert the military into an all-volunteer force, combined with the development of remotely piloted drones and cruise missiles capable of wreaking destruction at a distance, have reduced US casualties to a miniscule number, allowing the American people to ignore what’s being done in their name to innocent populations around the globe. Meanwhile, a media that simply do not question a military budget that this year, at $760 billion, exceeds half of the just-passed $1.33-trillion federal budget for discretionary spending.

Instead of honestly reporting the vast share of wasted tax revenues that go into supporting American militarism, the media resort to a sleight of hand that includes the separat payroll-tax funded Social Security and Medicare programs into the mix, thus reducing the military spending share of the budget to an artificially low 25%. The implication, which I’ve actually heard incorrectly stated on news programs, even on National Public Radio, is that military spending is “not discretionary” but is rather as unalterable as Social Security benefits. As one host of an NPR talk show put it in a program discussing the budget, without any correction being made, “Well, after you talk out the mandatory programs like Social Security, Medicare and Defense, it’s hard to find anywhere to cut the budget.”

This goes hand-in-hand with the generally accepted media description of America’s men and women in uniform as “heroes who are defending our freedom” as they occupy, invade and assault or launch deadly “targeted killing” attacks by drone or special forces actions in dozens of nations around the globe — nations whose people never travel more than a few miles from their native villages or towns, and whose countries pose zero threat to America or to American’s vaunted if all to seldom-exercised freedoms.

No wonder the latest US war crime of attacking Syria with cruise missiles is passing so unnoticed among the US public. Falsely reported or even celebrated in the US media as such attacks are, and with no coverage at all of the huge costs of US military spending, which is considered untouchable, Americans are left to debate whether or not President Trump should be impeached for his grotesque sexual proclivities, or for an alleged effort to obtain electoral assistance from Russia. Meanwhile Trump’s continuance of America’s massive global war crimes as the leading purveyor of death and destruction in the world, the leading marketer and provider of arms to other, mostly poor nations led by brutal dictators, and the leading obstacle to efforts to abolish such deadly weapons as atomic bombs, landmines, cluster bombs, depleted uranium and white phosphorus, goes unnoticed and unopposed by the American people, who remain for the most part entirely ignorant of untroubled by it all. In fact, that last time Trump launched such an attack, i 2017, he was, for the first time, praised for “finally being a president.”

Maybe what the nation’s embattled peace activists need to do, instead of just marching or demonstrating, is to start a campaign of painting messages directly on the evidence all around us of our nation’s dilapidated infrastructure of crumbling bridges, roadways and schools attributing each to the vast expenditure on the military. I’m imagining a rusty bridge with bold red words saying “The $4-million cost of three Tomahawk missiles used to attack Syria could have fixed this,” or a pot-hole-riddled stretch of interstate boldly painted with large white letters saying: “This stretch of highway repairable for the $100 million price of one F-35 fighter.”