The US media, awash in retired generals who work on the boards of big arms industry players and “experts” from neoconservative and neoliberal “think tanks” all calling for a US attack on Syria, have Americans cheering for yet another war, this time involving a very likely direct confrontation with the Russian military.

Nowhere in all this propaganda, can people hear a voice of sanity and genuine expertise such as Peter Ford, the former British ambassador to Syria.

To help in our small way to rectify this problem, here is a recent interview of Ambassador Ford from BBC Radio Scotland. Listen to all six minutes, as Ford gets his point out despite interruptions from a clearly unsympathetic BBC interviewer: 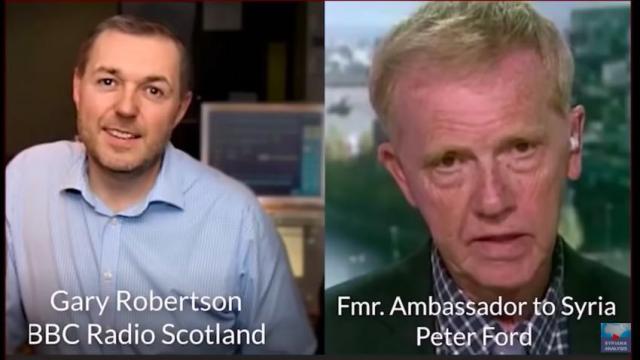 Here’s another recent BBC interview with Ford, who notes that even US Secretary of Defense Mattis concedes that the facts aren’t in to prove that a gas attack has even happened in Gouda.

At this point, massive opposition in the streets is the only thing that can break through this war hysteria. Here’s one place to find out about a protest action near you: