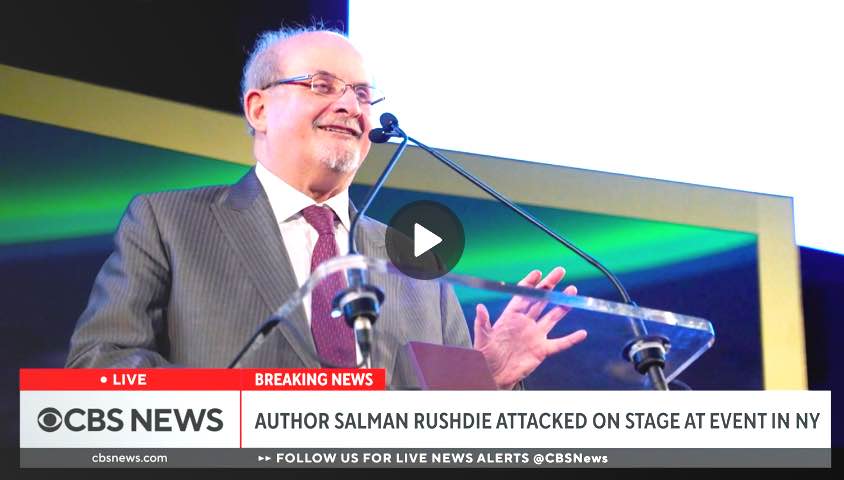 As I’m writing this it has been five hours since the cowardly attack on author Salman Rushdie, 75,  by what almost certainly is a Islamic zealot who, motivated by the fatwah issued against Rushdie in 1989 Muslim Grand Ayatollah Ruhollah Khomeini, then  leader of the theocratic Islamic state of Iran, stabbed him multiple times, including once in the neck and once in the abdomen.

The Khomeini fatwah, which offered a reward for the killing, for blasphemy, of Rushdie on account of his book The Satanic Verses. was later put in a kind of unofficial limbo by the Iranian government as it sought more acceptance in the international arena. Many experts on Islamic law noted though, that a fatwah can normally only be lifted by the religious leader who issues it, and Khomeini, for better or worse, at that point was dead and gone, having died the same year he issued it.  (A $3.8-million reward is still on offer for his death by a private Iranian religious foundation.)

For nine years after the fatwah issuance, Rushdie was hidden and provided round-the-clock protection in the UK by the Metropolitan Police Special Branch’s “A Unit.” He divorced his wife, American novelist Marianne Wiggins, perhaps in part to protect her and their young son from being collateral damage in any attack on him. The boy would be spirited by British police every month or so to whatever secret safe-house his father was in at the time,  There,  the latest chapter of a running story Rushdie told his son led to a fanciful and darkly humorous sci-fi fantasy novel, published as Haroun and the Sea of Stories. It was about a storyteller who had lost the “gift of gab,”  as Rushdie himself must have felt during his period of hiding, and his skeptical son. (Really an adult book disguised as a children’s book, I read the entire book to my rapt nine-year-old son at bedtime. Whenever I’d doze off he’d shake me and say, “Read! read!”)

Rushdie eventually eased cautiously back into the public sphere and seemed to have left the fatwah behind him, though there continued to be occasional  threats made against him and against those who published his work.

This attack by Hadi Matar, a 24-year-old UA-born son of Lebanese immigrant parents, who rushed the stage at the Chautauqua Institute in Western New York and repeatedly stabbed Rushdie as he was being introduced, was a surprise, though there was a State Police Trooper standing nearby for security, who was able to immediately arrest the assailant.  Matar is now in jail without bail awaiting trial on an attempted murder charge,

Rushdie, who was rushed by helicopter ambulance to a hospital after being treated at the scene by a doctor from the audience as well as EMTs, has apparently survived. A friend who visited him Saturday said he’s off a ventilator, can talk and is joking, but he remains seriously injured and may loss the use of one arm and an eye.  He was also stabbed in the abdomen, the blade piercing and damaging his liver.

But as Rushdie continues to be treated and to heal from this attempted assassination, I want to say something about the work that resulted in his becoming a hunted man sought out by pathological islamic zealots greedy for a guarantee of money and salvation  in return for killing a writer. Like, I assume, the man who attacked him.

Satanic Verses is, in my view, hands down one of the great novels of the 20th century, right up there with Joseph Heller’s Catch-22, Rushdie’s own earlier novel Midnight’s Children,  and Nikos Kazantzakis’s Last Temptation of Christ (a novel which earned that Greek author his share of death treats by crazed fanatic Christians for its depiction of Christ as a man driven by voices telling him he is a messiah  to turn to making and selling execution crosses to the Romans to prevent any possibility of that happening to him).

A question:  Why do fanatic religious zealots so often think their all powerful god needs them to slaughter anyone for blaspheming a god or a god’s prophet when such a god is surely quite capable of punishing such an offender if she or he feels it necessary?

Funny and deep at the same time, Rushdie in Satanic Verses presents a very humorous and by turns rather wacky Mohammad, living in his mountain cave and writing his Koran. It is the depiction of the Prophet as very human that was the ostensible reason for Khomeini’s fatwah, but those who read the whole book would have realized as I did that the  psychotic old imam character living in a London flat and mailing taped rants of hate and rebellion to his followers in Iran — a character clearly modeled on Khomeini himself — provided  the real reason for his fatwah.

That is, the fatwah condemning Rushdie to death was issued by Khomeini not to defend the honor of  Prophet, but as revenge for  Khomeini himself being made a subject of ridicule as a dotty charlatan and dangerous psychopath.

What made the old man with the stern visage and big white beard even angrier, I’m sure, was Rushdie’s rapier-like wit, particularly in that novel.  It’s one thing to be insulted, but it’s far worse to be ridiculed.

There were artists and writers, notably Roald Dahl and the singer Cat Stevens (a brilliant and sensitive musician who adopted Islam and for a time renounced singing), who either, like Dahl, blamed Rushdie for bringing the fatwah on himself, or like Stevens, said he deserved to die for blasphemy (a position he later said he disavowed and regretted).

At a time when here in the US, books are being banned by benighted right-wing school boards, denounced in Congress by charlatan  ignoramuses like Harvard (supposedly) educated Ted Cruz (R-TX), censored by state education departments, and in some cases burned, when right-wing and religio-fascists acting on their own steal or check out and never return books from libraries that they don’t think other people ought to read, we shouldn’t be too surprised to have an assassination attempt here on a fiction writer.

The problem is that the ignorant and stupid who cannot debate their way out of a paper bag, instead turn to violence and killing when they cannot figure out how to verbally criticize someone they disagree with.  Hopefully the ignorant zealot who stabbed Salman Rushdie failed in his effort to silence a courageous and talented writer, and will spend some of his time in jail learning how to do literary criticism as an alternative to using a shiv to make a point.

My hope is for Rushdie to recover from this vicious attack and give us another great novel. Maybe next, when he’s feeling up to it, he could take on the whack-job, AR-toting yahoos here in his adopted country who are parading around like brownshirts of yore calling for a new American Civil War. As a group they’re perfect targets for his brutal wit.