Sometimes you really don’t need to write much to do an article on something. Writing about the inanity of Justice Antonin Scalia, the ethics-challenged, lard-bottomed, right-wing anchor of the Supreme Court, is one of those times.

Scalia just weighed in on the CIA torture issue in an interview for a Swiss broadcast network, saying that he didn’t think there was anything in the US Constitution that would prohibit torture under all circumstances, and positing a situation — a suspect with knowledge about a hidden nuke to be detonated in Los Angeles — that he suggested would make torture an acceptable tactic.

First of all, if Scalia can say “I don’t know what article of the Constitution” would “contravene” harsh treatment of suspected terrorists, he is either terminally ignorant, or has figured out some talmudic-like gymnastic reasoning to allow him to argue that the Eighth Amendment’s ban on “cruel and unusual” punishment doesn’t apply to torture. Perhaps he thinks that punishment can only refer to what is meted out to a person after conviction, but as he surely knows, for literally centuries the court has been clear that the treatment of suspects is also covered by that ban. Furthermore, the Founders Scalia claims to have such respect for, clearly had in mind the abuses British colonial forces visited upon arrested and detained colonists when they wrote that ban into the Bill of Rights.

But beyond that, the argument about a suspect who knew about a hidden nuke, or an Anthrax or Small Pox bomb, which is hardly an original idea of Scalia’s, has always been silly. Establishing that torture is always illegal, and that its perpetrators are committing a heinous crime, would never stop some cop or FBI agent or CIA agent from torturing such a suspect if he or she thought it could produce the information needed to find and prevent such a bomb. Who would think about future punishment in such a crisis?

Nobody. And if such a situation came to pass, and the bomb was found and disarmed, no one would ever prosecute whoever came up with the information that saved the day. So it’s not a valid argument against an absolute ban on torture at all.

What should be banned is idiots, jerks and self-aggrandizing ideologues like Scalia on the High Court — especially ones who are happy to accept gifts from people who have cases pending before the court. 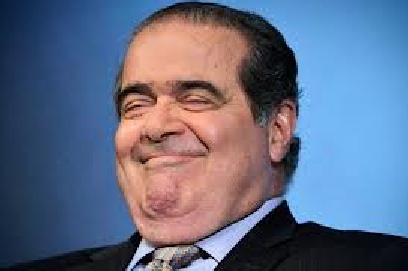 Justice Antonin Scalia, the intellectual light-weight who anchors the right-wing of the Supreme Court