Algiers — The Western Sahara is not just a section of the famous desert that dominates North Africa.

The Western Sahara is a country on the Atlantic Ocean coast of North Africa with the dubious distinction of being the “Last Colony” on the vast continent of Africa. The current colonizer of this mineral-rich nation is the neighboring country of Morocco, which for decades has been conducting a viciously brutal occupation. A long history of human rights violations by Morocco in the Western Sahara have drawn wide condemnation from diverse entities including Amnesty International, Human Rights Watch and the United States, ironically an ally of Morocco.

The plight of the Saharawi people, the indigenous population of the Western Sahara, was the focus of a conference in Algiers last weekend that attracted participants from across Africa , Europe and the Americas. That conference featured Saharawians who have been tortured and imprisoned by Moroccan authorities as well as experts who detailed various facets of Morocco’s illegal occupation, including that country’s failures to comply with United Nations mandates to conduct a voter referendum for determining the future of Western Sahara.

“Morocco confiscated our land. Built a wall dividing our country. It violates human rights while plundering our natural resources,” Mohammed Abdelaziz, the President of the Western Sahara, said during his address at the opening ceremony of the 5th International Conference of Algiers. Called “The Right of Peoples to Resistance: the case of the Saharawi People,” the conference was held at Algeria’s Palace of Culture in the nation’s capital.

“We need a free, fair and just referendum to exercise the right of self- determination to create an independent state” President Abdelaziz said. 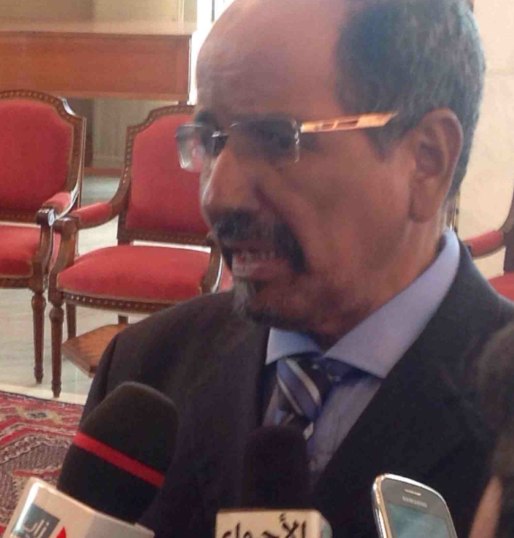 The Saharawi want an independent nation, while Morocco has offered the Saharawi only autonomy under Moroccan control. Morocco initially invaded Western Sahara in 1975 following the withdrawal of the then colonial ruler, Spain. That military invasion was followed by Morocco’s sending of hundreds of thousands of settlers into the country. It sparked a war with the Saharawi which wound down to a stalemate with Morocco controlling 80 percent of the country, including its fishing rich coast line, vast mineral deposits and major cities. The remainder of the country has been controlled by the Polisario Front, a liberation force that remains the main political force in the struggle for independence.

The United Nations approved a referendum on the future status of the Western Sahara in the early 1990s but Morocco has balked, refusing to permit the U.N. to conduct a vote. Morocco’s occupation is strongly backed by France, and has the tacit support of the United States. While the U.S. does not formally recognize Morocco’s sovereignty over what Morocco calls it’s “Southern Provinces,” it has not forcefully demanded that its ally comply with international law. Morocco contends its claim on the Western Sahara predates Spanish colonization, a position rejected by the International Court of Justice in 1975, months before Morocco’s invasion.

“International law recognizes Western Saharan independence from Morocco. His Majesty the King of Morocco wants to stop the will of history,” Dr. Said Ayachi, chairman of the Algerian National Committee of Solidarity with the Saharawi People, said during remarks at the conference. Algeria has supported the Saharawi economically, militarily and politically, putting it at odds with its next door neighbor Morocco, as did Libya, before the US-led overthrow of Libyan leader Muammar Ghaddafy.

“This is a struggle that should have ended years ago. Morocco must cease violating international law and stop violating human rights like committing torture in the Western Sahara,” said Obed Bapela, a representative to the conference from South Africa’s African National Congress. The legendary South African leader Nelson Mandela had consistently supported freedom for Western Sahara.

No representative from Morocco spoke at the conference. Morocco officially denies brutality in the Western Sahara but a U.S. State Department human rights report released in February 2014 listed violations including “physical/verbal abuses” of Saharawi people “during arrest and imprisonment.” That report also listed a lack of democracy, corruption and “widespread disregard of the rule of law” by Moroccan security forces — violations that report stated also occur inside Morocco — a monarchy ruled by a king.

The night before the conference opened, the opening film at the Algiers International Film Festival was “Sons of the Clouds” a documentary on graphic Moroccan brutality in the Western Sahara produced by Academy Award-winning Spanish actor Javier Bardem.

Saharawi people meeting with a group of African-American journalists who attended the conference described arbitrary beatings, arrests and torture suffered while they were imprisoned for terms ranging from few months to years. One former prisoner described being blind-folded and handcuffed during one two-year imprisonment (his third, the first having begun when he was fifteen years old). A 25-year-old woman told of the imprisonment of numerous members of her family. She was imprisoned with her grandmother, who died a week after their release from prison.

Morocco enjoys support on Capitol Hill, ranging from conservatives to members of the liberal-leaning Black Congressional Caucus. American human rights activist Susan Scholte, who has worked on the Western Sahara issue since 1993, said most American supporters of Morocco’s position on the Western Sahara either don’t know the facts or are getting paid by Morocco. Morocco spent $3.5-million on lobbying inside the U.S. In 2013 alone, according to public documents.

“This is a clear-cut justice issue. You can’t support invasion and occupation. Peaceful protesters in the Western Sahara are beaten and shot by  Moroccan police,” Scholte said during an interview in Algiers. Scholte, a Republican, asked, “How can America ever expect to win the war on terror when it allows this issue to fester?”