In all the media debate about the Senate Intelligence Committee’s release, finally, of a heavily redacted report on officially sanctioned torture by the CIA and the US military during the Bush/Cheney administration and the so-called War on Terror, there has been little said about the reality that torture, as clearly defined in the Geneva Convention against Torture which went into effect in 1987, is flat-out illegal in the US as a signatory of that Convention.

During the Bush/Cheney years, administration lawyers like the reprehensible John Yoo (now, incredibly, a law professor at UC Berkeley), tried through shameless legal gymnastics, to provide legal cover for, and to legally authorize “enhanced interrogation” techniques. But the Geneva Convention is clear on this point: It says torture means:

…”any act by which severe pain or suffering, whether physical or mental, is intentionally inflicted on a person for such purposes as obtaining from him or a third person information or a confession, punishing him for an act he or a third person has committed or is suspected of having committed, or intimidating or coercing him or a third person, or for any reason based on discrimination of any kind, when such pain or suffering is inflicted by or at the instigation of or with the consent or acquiescence of a public official or other person acting in an official capacity.”

All of the tortures cited in the Senate report, from rectal “rehydrating” to telling a captive he would later be killed if he didn’t talk, are unarguably torture under this broad definition, and call for severe punishment, not only of the perpetrators, but also of those who authorized their actions, or those who covered them up or failed to bring them to justice. And let me add that under the Geneva Conventions, torture during wartime has no statute of limitations. 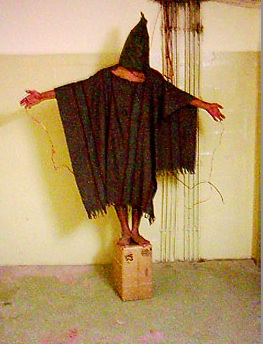 US officially sanctioned and encouraged torture at Abu Ghraib, while horrific, is only the tip of a very large and ugly iceberg

True, in approving the Geneva Convention, the US added a caveat, defining torture as being whatever meets the standard of “cruel and unusual punishment” as prohibited in the US Constitution. But again, the actions that have been exposed as having been employed against captives by the CIA and the US military in that Senate report also clearly are “cruel and unusual” punishments by any definition.

And what about Vice President Dick Cheney? The perpetually scowling draft-dodger who famously said that the US needed to turn to the “dark side” to combat terror after 9-11, is even now, in the face of the outrages cited in the just-released Senate report, claiming that the years of kidnapping, renditioning and torture he and President Bush oversaw during their eight years of power in Washington were justified because of the terrorist threat facing the US.

But again the Geneva Convention, which as a treaty, according to the US Constitution, has the full force of US law, states clearly that:

“No exceptional circumstances whatsoever, whether a state of war or a threat or war, internal political instability or any other public emergency, may be invoked as a justification of torture.”

Even the wily and unprincipled attorney Yoo can’t work his way around that one.

Clearly, both President Bush and Vice President Cheney must, under this Convention, be brought to justice for high crimes against international law, the laws of the United States and the Constitution itself. Equally clearly, the current president, Barack Obama, has an obligation under the treaty and under the US Constitution and US law to instruct his Department of Justice to bring them to justice. If deemed necessary, they may have to be impeached, but if so, a bill of impeachment should be filed promptly by some principled members of the House of Representatives, if there are any left, or alternately, by some state legislature.

As the Geneva Convention states:

“Upon being satisfied, after an examination of information available to it, that the circumstances so warrant, any State Party in whose territory a person alleged to have committed any offense referred to in article 4 is present, shall take him into custody or take other legal measures to ensure his presence. The custody and other legal measures shall be as provided in the law of that State but may be continued only for such time as is necessary to enable any criminal or extradition proceedings to be instituted.”

We’ve had the investigation. At this point, President Obama and his Attorney General Eric Holder have all the evidence they need to confirm that torture was committed, and that it was authorized at the highest levels not just of the military and CIA, but of the White House. The president may not, under the law, simply say as he has in the past that the country is “moving on,” and that there will be no prosecutions.

ACLU head Anthony Romero has suggested that, thanks to the broad power of the pardon vested in the presidency by the Constitution, Obama could pardon his predecessor and others in the Bush/Cheney administration who criminally authorized torture, and has argued that this might be a compromise action he could take. But that, according to international law expert Francis Boyle, a professor at the University of Illinois Law School in Chicago, would not only have zero impact on the fact that they are all in violation of international law. “It would also open the president to a charge of being an accessory to the fact,” he says, “because under the Geneva Convention on torture, the government, and in this case the president, is obligated to see that these crimes and criminals are prosecuted. Boyle added, “I can’t believe Romero would have said that the president could pardon these people! The ACLU board should fire him!”

President Obama is fond of saying that the US is an “exceptional nation.” That is true, but the exceptionalism at this point appears to lie in its propensity for brazenly breaking international law and for letting war criminals go unpunished. That is surely not the kind of “exceptional nation” that most Americans want the US to be.

There was a secret memo which I wrote about in my book The Case for Impeachment (St. Martin’s Press, 2006), written to President George W. Bush by then White House counsel Alberto Gonzales, which addressed the president’s secret executive order on torture. In that secret order, Bush said that he was “opting out” the US from the Geneva Convention against torture — something that a president does not have the power to do, any more that a president could “opt out” of the Constitution’s separation of powers or Bill of Rights. Gonzales pointedly warned Bush that if he took that action — which he did — both Bush and “other high officials,” could eventually be prosecuted for war crimes — crimes which he pointedly noted carried a potential punishment of death – for example if someone died under torture (which we know happened several times).

So far, Gonzales’ warning has come to nothing. Our Constitutional Law Professor and Nobel Peace Laureate President Obama has abysmally failed in his sworn duty to uphold the law and the Constitution by not prosecuting his predecessor and subordinates for these high crimes.

Instead, he has joined them in their reckless crimes by failing to prosecute, and is now at risk of being equally guilty for covering up torture and protecting the torturers.

It’s not enough for the current president to say that the US “did some things that were wrong,” and that “we tortured some folks.” He has a legal obligation to prosecute the criminals who tortured, and who authorized torture.

Anything else is to relegate the US to the status of just another rogue state in the annals of rogue states like Mubarak’s Egypt, Mao’s China, Stalin’s USSR or, dare I say it, Hitler’s German Reich.

(Note: Fortunately, Prof. Boyle and a group of committed attorneys in 2010 filed charges with the International Criminal Court in the Hague accusing Bush, Cheney et all of crimes of torture and other violations of international law. Where prior efforts to do this have been ignored by the court, this case is still pending, Boyle reports, adding that he is now preparing an addendum citing the evidence presented by the Senate Intelligence Committee. He says the reason this case may be still be getting considered by the court is because in this case the court has jurisdiction. Under international law, the international court at the Hague does not have jurisdiction to prosecute leaders or countries that don’t recognize its jurisdiction. That would be the U.S. However, in the case of the torture convention, or war crimes under the Geneva Convention, if a country commits those crimes in countries that are signatories, the court can hear the case. As the US is known to have tortured “folks” at black sites in a number of European and other countries that are signatories, including Afghanistan, where a large number of people were tortured, the ICC can take the case and can put US leaders in the dock, even in absentia.)