Psychoanalysis enables us to point to some trace or other
of a homosexual object-choice in everyone. … It can be traced
back to the constitutional bisexuality of all human beings.
Sigmund Freud

I realize I may not have a very developed appreciation for the nuances of bureaucracy and government. But if one values honesty over repression, this policy just doesn’t make sense.

Alexander The Great, one of the greatest military leaders in history, swung both ways. Lawrence of Arabia was the homosexual military genius instrumental in forming the Sunni-ruled Iraq we invaded and turned upside down in 2003.

President Obama, Defense Secretary Robert Gates and Chairman of the Joint Chiefs of Staff Mike Mullen all say they are ready to repeal the Don’t Ask, Don’t Tell policy put into law 17 years ago.

The House passed a repeal law in May by a wide margin. The Senate was expected to follow suit, but last month the bill was defeated.

“The whole thing is a political train wreck,” Richard Socarides, a gay rights advocate from the Clinton administration, told the Associate Press after the Senate loss.

But even if it had passed into law, effective repeal was still up to the military. A “trigger” amendment tacked to the bill would have allowed the top brass to drag their feet on repeal or veto it indefinitely.

The military is now surveying its men and women in uniform on how they feel repeal would affect “military readiness, unit cohesion and our ability to do our mission.” That is, are our soldiers strong and secure enough to knowingly serve with gay soldiers?

Commander-In-Chief Obama indicated he too would defer to the military on the matter and leave the decision in the hands of the Pentagon.

The potato is tossed to a grown-up

Just when the military thought it had the public relations under control and the lifting of the ban all worked out on their terms, along comes California Federal District Justice Virginia A. Phillips to mess it up by declaring the obvious.

In a case brought by the Log Cabin Republicans, Phillips ordered the Defense Department to end Don’t Ask, Don’t Tell immediately because it violated due process rights and rights of association and the “autonomy of self that includes freedom of thought, belief, expression, and certain intimate conduct.”

The Constitution says nothing about precluding citizens from serving in the military based on sexual preference. Every other major army in the world allows homosexuals in their ranks, including the Israeli army, the security force we most love to emulate in the War On Terror. They don’t feel gay people affect military readiness or unit cohesion.

On the ground in Iraq and Afghanistan, commanders are reportedly overlooking the DADT ban because they don’t want to lose good soldiers during wartime.

But instead of rejoicing that, finally, someone in the government has had the audacity to make a reasonable and mature decision, the Obama administration has gone into a huddle to ready an appeal of Judge Phillips’ decision.

In the case of integrating African Americans into the military, President Truman ignored top brass reluctance based on the very same arguments now being made about gays. Why can’t President Obama do the same? There comes a time when decisions need to be audacious.

The tragic fact is, in 2010, our military institution is so powerful with such a huge and sacrosanct budget and so bogged down in wars, it tends to tell its commander-in-chief what to do.

Diane Mazur, a legal expert at the University of California, likened DADT to a hot potato. “The potato has been passed around so many times that I think the grown-up in the room is going to be the federal courts.”

The real issue with gays in the military

All the discussion about homosexuality in the military naturally made me think of those incredibly indecent photographs leaked from Abu Ghraib Prison back in 2004.

In December 2003, I was in the parking lot of Abu Ghraib Prison with a group of veteran and military family peace activists. We were requesting access to the prison.

Men watched us with binoculars from the watchtowers, and of course we were refused entry. We settled for talking with US soldiers outside the walls and some of the Iraqi women and children futilely trying to get in to see their sons, brothers or fathers.

I’ll never forget a US army major who came out to check us out. He seemed completely frazzled, and I concluded he was a reservist in way over his head. Very un-officer-like, he had things scribbled all over his helmet liner. He was quite friendly, as if he was glad to talk to a sane person for a change.

“You would not believe what’s going on in there,” he told me.

We know the story by now. On the late shift a team of military police reservists were coached by CIA agents to “soften up” the Iraqi detainees for interrogation later by the CIA talent. Years later, it was revealed that over 70 percent of the men held in Abu Ghraib were innocent and just caught up in the intensity of the invasion. 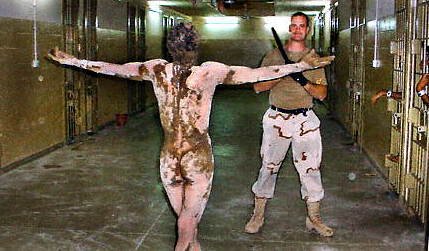 An MP homosexually degrades an Iraqi detainee, while other detainees watch. 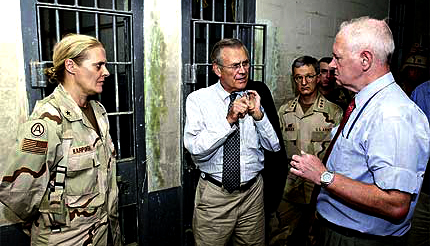 This was the moment when Donald Rumsfeld and the rest of the Bush warriors realized their “shock and awe” invasion had fomented a surprisingly robust insurgency, and they were scared.

Feminists have always emphasized that rape is not a sexual crime – it’s a crime of power. OK. But still, it’s a sexual act, albeit one establishing power over another. Taken as acts of power, the acts undertaken late at night in Abu Ghraib, while maybe not literally “rape,” were certainly instances of homosexual degradation and humiliation.

Seymour Hersh reported that in 2003 at the point the insurgency was appearing in Iraq, a book titled The Arab Mind by Raphael Patai, an Israeli, was making the rounds in the Pentagon. Of especial interest, he said, was the chapter, “The Realm Of Sex.”

Homophobic and anti-gay people tend not see this kind of behavior as homosexual. Even if they saw it as criminal, they would see it as manly, because it was violent and our guys were in charge and not the ones being degraded.

“The Arab attitude coincides with that of the Turks, among whom the performance of the active homosexual act is considered as an assertion of one’s aggressive masculine superiority, while the acceptance of the role of the passive homosexual is considered extremely degrading and shameful because it casts the man or youth into a submissive, feminine role.”

An egregious example of this occurred last week in the Bronx. A gang of Hispanic machos lured a well-liked and openly gay man (he was called “she” by many in the neighborhood) to an abandoned house where they stripped him, tied him up with tape and anally raped him for hours with a small baseball bat. They did it because they found his feminine gayness obnoxious.

One of the military’s fears about allowing gays to be open about who they are could be fear of this kind of hateful, violent backlash and a reluctance to crack down hard on it.

It must be said that there is absolutely no connection between the horrendous, sadistic activities at Abu Ghraib Prison and the issue of soldiers who may be gay serving in the United States military. It’s the difference between what war correspondent Chris Hedges sketches out as the cultural and psychological forces of Thanatos, the death instinct, and Eros, the life instinct.

Hedges, a graduate of the Harvard Divinity School, believes that our militaristic culture is disastrously lost in the realm of Thanatos and tragically wedded to the use of violence as a tool of influence and as the ultimate arbiter of value.

I have a friend who was a Navy corpsman who spent a year in combat in Vietnam patching up wounded and dying Marines. He was gay then, and he’s gay now; he lives with his partner of 20 years. Those he saved in Vietnam didn’t care if he was gay. These days, he dedicates himself to clearing the world of landmines and cluster bombs, since he has seen very close up what they do to a human body.

When I think of my friend Mike and his service in the US military and the ridiculous and dishonest dance now going on in Washington to keep reality at bay just a little longer, the absurdity of it all gets more and more incredible.

So who better to call up in this argument than the great American democratic bard of Eros, Walt Whitman. Here’s a paean to the bisexual nature Freud recognized in all humans – part of the passionate yin and yang of life.

A woman waits for me, she contains all, nothing is lacking,
Yet all were lacking if sex were lacking, or of the moisture of the right man were lacking.

Sex contains all, bodies, souls,
Meanings, proofs, purities, delicacies, results, promulgations,
Songs, commands, health, pride, the maternal mystery, the seminal milk,
All hopes, benefactions, bestowals, all the passions, loves, beauties, delights of the earth,
All the governments, judges, gods, follow’d persons of the earth,
These are contain’d in sex as parts of itself and justifications of itself.

The point is not to advocate any sexual preference. The point is to stop denying reality and to be clear about cracking down on those in uniform who would violently harass gay service members.

Our Commander-In-Chief should accept Judge Phillips’ ruling for what it is and order the military under his command to move on from the un-Constitutionally repressive climate of Don’t Ask, Don’t Tell.