Two of my oldest and dearest friends in life are unemployed and suffering – facing full-blown collapse monetarily and mentally.

Both have graduate degrees, multiple skills, commendable work records and zero job search success despite diligently scouring every source available during the past two years.

Oh, another important factor in the equation of my friends’ exile from employment ranks. Both friends are over fifty, a seeming Bestial Mark during this era when brazen age discrimination trumps traditional discrimination based on race, gender and disability.

Amplifying the anguish my friends harbor already from feeling their joblessness is somehow their fault are increasing reports that employers are refusing to hire unemployed people, citing their jobless status as evidence of their worthlessness as employees. 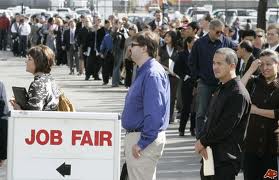 There may be job fairs, but there are no jobs. Is that fair?

Employers, according to recent media reports, manufacture myths about the jobless, such as the jobless are unemployed due to poor work performance or that the currently employed are more current in needed proficiencies.

One friend’s downsizing had nothing to do with poor performance and that friend avoided layoff-induced “obsolescence” by returning to college and taking training for additional skills.

This friend’s layoff came just days after winning yet another company award for record sales. While laid-off and looking for a work this friend obtained two advanced certifications each representing expanded proficiency in new technologies.

Further, this friend even learned golf, considering that game to be an effective tool enabling her to better perform the etc side of the sales profession – given that the links often trump a dinner table as a place for closing big deals.

My friends, like millions similarly situated across America, are the collateral damage of this devastating economic depression so craftily mischaracterized as a recession by politicians and media pundits. My friends see some pundits as enabling unwilling politicians intent on doing nothing to realistically confront the nation’s economic problems.

My friends talk sadly about the mental depression, embarrassment, helplessness and isolation they endure being unemployed…all major life-wrenching realities that receive little attention from ‘thought leaders.’ There is too little leadership looking for creative approaches to deal with this soul-crushing economic malaise.

One friend compiled a list of the ugly antics encountered while trying to reenter the working world.

That list includes things like: online job boards that require users to upgrade from free resume distribution to paid categories for “better results” that still don’t pay off; paid sites that post job listings that are months old; recruiters who normally get paid by the companies when they find suitable candidates who are now doing free webinars to solicit coaching fees from unemployed workers trying to get hired, and job fairs where most vendors tell eager applicants they are not hiring but will provide the company website to search for jobs that may be posted in the future.

“You join networking groups to widen contacts. Many of these groups promise that if you attend their events you can meet with companies that are hiring. But few firms show up at these events and none have jobs available,” lamented one friend.

My friends have both grown contemptuous of media reports which constantly proclaim an easing of the recession, always based on new statistics that are flimsy at best.

And one of the most egregious lies confronting the jobless is the official unemployment rate, a farce that vastly undercounts real levels of joblessness because that rate only includes persons looking for jobs, not those who’ve stop looking because the effort is pointless, or those who never utilized official sources like state unemployment agencies – another farcical endeavor filled with regimes of filling out forms with no real results.

It’s bad enough that my friends have to endure incessant pick-pocket scams in their job searches – like entities promising assistance while asking for cell phone numbers to deceptively bill for text messages sent out containing worthless job referrals.

Even worse than these scams to steal revenue from persons with no income are the insults heaped on my friends and millions of other jobless people by heartlessly cruel conservatives – mainly Republicans – always quick to pontificate about how the jobless allegedly don’t want to work or to call unemployment compensation a crutch that allegedly hinders the momentum of economic recovery.

For the record, Democrats in DC are dismal on the jobs-creation front…too timid to seriously confront the all-out assault on middle and lower classes by craven capitalists.

Exhibit A for the crass anti-jobless conservatism is Pennsylvania Republican gubernatorial candidate Tom Corbett. Earlier this summer Corbett proclaimed that too many jobless prefer lying around collecting unemployment payments instead of taking available jobs.

One of my jobless friends countered Corbett by making the observation that, “You cannot pay your bills with unemployment.”

The $500 weekly that this person was receiving in unemployment payments before they ran out amounted to less than a third of their weekly salary at their last job. Further, most unemployed receive far less than my friend, because their salaries were far lower.

Some newspaper editorials rightly castigated Corbett for his “ignorant and insensitive” assertion, stating the obvious that Corbett ignored – there is “no evidence” supporting Corbett’s contention that jobs abound across Pennsylvania’s depressed landscape.

Candidate Corbett swung around –trying to remove his dog-dropping-stained shoe from his mouth — and told the public that he didn’t mean to “imply that anyone was lazy” for being on unemployment instead of reentering the work force.

Corbett claimed he wasn’t saying what he believed based on what he actually knew about jobs/joblessness, but rather was only repeating something that someone else told him. That weasel rationale prompted one newspaper to fault Corbett for failing to do his homework, instead of relying on (alleged) anecdotal information provided by “someone else.”

Good thing Corbett made his now self-acknowledged “insensitive” assertion as a political candidate in the court of public opinion instead of in a court of law, given that his day job is being Pennsylvania’s Attorney General.

If a gubernatorial aspirant doesn’t know jobs in Pennsylvania are scarcer than rattlesnakes without poisonous fangs, that person lacks the critical capacity and compassion needed for that executive office.

The reality is Corbett tried to score a slimy conservative Republican political point with his jobless-are-lazy pronouncement.

AG Corbett currently has the power, if he wanted to use it, to attack the rampant age discrimination that is ravaging 50+ job seekers in his state. He could, if he wanted to, also sue the scammers who are pick-pocketing Pennsylvania’s unemployed. But AG Corbett instead uses his powers for partisan purposes, like participating with other Republican AG’s in the lawsuit attacking President Obama’s health care reform.

Corbett’s ‘Attytood’ about the jobless is not an isolated incident of an errant comment. Weeks after Corbett’s comment, other Republican candidates from coast-to-coast unleashed GOP talking-points pounding on unemployment compensation and the minimum wage.

Miller hinted at eliminating unemployment compensation before pulling his own moose-poop-stained boot from his mouth following revelations that his own wife received unemployment when she was discharged from a government job where she worked for him.

Apparently Tea Baggers don’t see the naked nepotism in Miller’s having placed his wife on the public payroll as contradicting their oft-spouted claim about wanting to “restore integrity” to government.

Republican multi-millionaire Linda McMahon, the Connecticut US Senate candidate, called for lowering the federal minimum wage, an already paltry figure that keeps a family of four below the federal poverty level even if they both put in 40-hour work weeks.

McMahon – also foot-in-mouth – admitted she didn’t know the exact amount of the minimum wage in Connecticut, and didn’t know if any of her employees in the World Wrestling enterprise she formerly headed were paid minimum wage.

This insensitivity to the plight of the suffering jobless on the part of GOP big-wigs and their right-wing candidates exposes an alarming insanity among non-wealthy Republicans and their Tea Party confederates, who blindly back politicians whose policies work harshly against their own basic economic interests.

My friends are hurting. I can’t help them. And that hurts me…