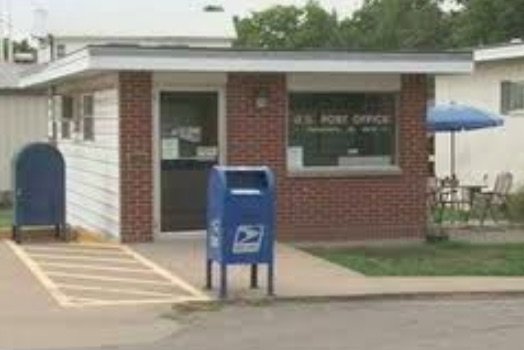 Check out the map of so-called Red and Blue states, and also note how in the Red states, most Blue voters are jammed into more densely populated urban centers while the rural counties are almost  uniformly Red, ie: Republican.

Now consider how important the Postal Service is in all that vast stretch of right-wing Red.   In rural communities the Post Office, and rural delivery to mailboxes, are critical to survival — it’s how people get many of the things they need, including prescription medicines, newspapers, and for older people, notices from Medicare and Social Security, important bills, messages from far-flung friends and family, etc. It’s how they pay those bills if they’re not computer savvy. Indeed the local Post Office itself in most small communities is as much a social center for meeting neighbors and learning about the local scene as it is a place of business.

When service is damaged, as it surely has been in recent years through deliberate de-funding of service and layoffs of postal workers, as well as the appalling jacking up of postage rates, it causes severe hardship in these rural communities.

The US Postal Service used to be supported by virtually everyone in Congress, but in more recent times, it has become an ideological target of Republicans who have pushed to increasingly privatize it, forced the Post Office to “partner” with private competition like FEDEX by allowing FedEx boxes to be placed on Postal Service property, and and by requiring Postal Workers to “pre-fund” their entire medical and retirement care ahead of time fully, a huge multi-billion dollar hit on the service’s budget that private industry does not face.

Lately, under Postmaster  Louis DeJoy, the system has been deliberately sabotaged, with expensive automatic mail-sorting machines and entire sorting centers being raided and the machines removed and deliberately damaged or taken apart for scrap, causing delays in first class mail that can run into weeks.

It is a testament to the importance of the service that despite the years of attacks and wrecking efforts,  it remains wildly popular among most American citizens and especially among those who live in rural areas. In fact, the Postal Service continues to be the most popular  agency of the federal  government according to polls, including among conservatives.

Clearly, what the Democratic Party and its elected officials, including President Joe Biden and the narrow Democratic majorities in both houses of Congress should be doing is going out and campaigning in rural America for a program to restore the Postal Service to its former glory.  One big thing they could do now, which would require Democrats to blow off the lobbyists of the banking industry (which has for almost a century been blocking this logical idea so common around the world), is to have a federal, publicly owned full-service bank operating out of every Post Office.

For many rural communities that would be the first time there would be a bank in walking or short driving distance of their home. No more would they have to drive for miles to go to an urban center and visit a bank. There’d be a place to pay bills, get cash, open a checking account,  and even apply for a car loan or mortgage.  A public bank based in your local post office would also provide much needed competition for the increasingly consumer-loathing and increasingly merged and concentrated private banks that keep adding more service charges to customers making it ever costlier just to have even a savings account or basic checking account. It could put pressure on those commercial  banks to lower their fees, increase the interest paid on deposits, and to offer better loan rates — the very reason the commercial banks are so opposed to the idea of a post office public bank.

When I lived in Taiwan for half a year in 2004, I did all my banking a the local Post Office, as did most of the people in the university where I was working.  It was easy, the tellers were courteous and the service efficient.  In Vienna, during a one week stay two years back, not only could I change money at the Post Office bank window a block from my hotel, but they operated, quite logically, a stationary store in the lobby where things like typing and photocopying paper, staples and glue, computer and printer supplies, etc. were all available.

If Democrats would make a stand on restoring the Postal Service to health, and on putting a public bank in every Post Office, including an ATM machine for such banks for after hours access and at small rural one-person Post Offices where the local postal worker might not have time to also be a bank teller, it would be a huge blow to the Republicans in those usually solidly Red communities unless the Republicans changed their position on supporting the Postal Service.

And it would open a wedge between rural voters who have been robotically voting Republican now for several generations not necessarily realizing how badly that party has been attacking their basic interests. That would allow Democrats to reach those voters on issues that really matter to them like rescuing Social Security, expanding Medicare coverage to more people, etc.

Progressive Democrats in particular should jump on this because they’ve got the real message that rural America needs to hear.

During the ’30s, Democrat Franklin Roosevelt, from  a background as governor of New York State, and  a quintessential urbanite,  became a rural hero as president across the country by promoting things like the rural electrification program.  A revitalized progressive Democratic Party could make the same breakout into rural America by fighting for and actively promoting a properly funded Postal Service, protecting local post offices from closure, and backing a Postal Service public bank.

Postal workers would play an important role in such a move into solid Republican conservative territory. First of all, most postal workers are unionized and are strong advocates of the trade union movement, which tends to be missing these days in conservative rural America. While those workers cannot actively back unions on the job, they live in those communities and can speak their mind on their own time. In my experience, postal workers tend to be Democratic, or independently progressive too and are an important antidote to the right-wing echo chamber that prevails in the electronic media that washes over conservative rural American airwaves.

It’s past time for progressive Democrats to stop focussing on the places they win votes easily, in the cities and the suburbs and to go where the Republicans win by default:  rural America.  And the place to start is with a militant drive to rescue the Postal Service, beginning with the firing of the saboteurs on the Postal Board of Governors, most notably Postmaster General Louis DeJoy.