The only way to survive such an insane system is to be insane oneself.
– Joseph Heller

When the going gets weird, the weird go pro.
– Hunter Thompson

The Pentagon has its hands full in Afghanistan trying to make the debacle there look like a success for the December assessment it must provide President Obama.

The brilliant counterinsurgency theorist General David Petraeus is “pulling out all the stops,” according to The New York Times. He has expanded hunter/killer special-ops raids to a dozen a night, and he has pressured the CIA to ramp up its already heavy rate of drone attacks.

We no longer have body counts as in Vietnam, but the killing pace is on the rise to clear out insurgent leadership – or anyone, in COIN parlance, who is “irreconcilable” to US interests. 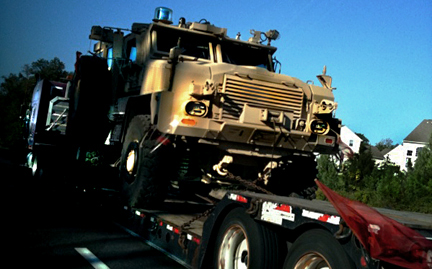 A 20-ton MRAP begins its long, expensive journey to Afghanistan on the I-95 corridor in Virginia. Photo: Lou Ann Merkle

At the same time, a contrite Petraeus is apologizing profusely to the leaders of Pakistan for a cross-border helicopter raid that chopped up several Pakistani soldiers. This is in addition to the usual denial-then-apology cycle for the almost-weekly civilian deaths from the special-ops raids and drone attacks.

The Pakistanis are so furious over the cross-border helicopter raid they stopped US convoys delivering vital fuel into Afghanistan at the Khyber Pass, leading to at least 35 fuel trucks being torched and destroyed by either organized insurgents or members of the large and growing population of Pakistanis who hate our guts.

Then, there’s the case of outright psychopathic murderers in US uniform, such as Staff Sergeant Calvin Gibbs who stands accused of killing Afghan civilians for sport and collecting souvenir fingers.

Petraeus has pressured the reluctant Pakistani military to attack insurgent elements in the Pashtun border areas, and now Pakistani soldiers have been caught on video lining up six young, blindfolded civilian males and gunning them down. We find this offensive, since we do our killing discriminately – or by killing people who get in the way of our super lethal weapons, then apologizing.

“I am appalled,” says Rep. Howard Berman, chairman of the House Foreign Relations Committee. He has threatened this “could have implications for future security assistance to Pakistan.”

Meanwhile, back in Afghanistan, President Hamid Karzai’s large extended family has become a vast and corrupt network of powerful blood-cronies. Like the Taliban, Karzai is a Pashtun; he is from Kandahar, the Pashtun heartland. He is reportedly convinced the US is going to abandon him, which has motivated him to secure his power base one deal at a time, since that’s the way it has been done for thousands of years. The Washington Post reports that he and the Taliban are in secret talks with terms for US withdrawal on the table.

Despite the July 2011 withdrawal date, the US shows no signs of leaving any time soon. The military has even decided to go green. No kidding. The Pentagon is launching a major, multi-decade R&D effort to run its war machine on alternative energy.

That’s right, the institution that has expended trillions of US tax dollars securing US access to fossil fuel is now throwing itself into research and development of solar and other alternative energy sources.

Company I, Third Battalion, Fifth Marines, has just deployed from California to Helmand Province, and it will run its 150-Marine operation on solar and renewable power technology costing about $70,000. The plan is to use the technology for the more remote installations first, then as the R&D advances, expand the green transformation.

The Navy’s hybrid amphibious assault ship USS Makin Island hums purely on electricity when traveling under 10 knots; it saved 900,000 gallons of fossil fuel on its maiden voyage from Mississippi to San Diego.

The Marines are looking into small scale, truck-based biofuel plants that could turn vegetable matter into fuel. In Afghanistan, it was suggested the poppy crop might be used to make fuel instead of heroin.

The large list of “eco tech” projects the military is working on includes solar field shelters that go over your tent and generate electricity using very thin silicon sheets. There’s hybrid electric drive systems for a number of combat vehicles such as the Non-Line-of-Sight Cannon (or NLOS-C), a 155mm self-propelled howitzer. Then there’s the UNI-PAC solar panel that can actually be worn by soldiers to recharge various military gadgets.

Maybe the coolest entry is The Aggressor, a lethal-looking, 66-inch-wide hybrid diesel golf cart that can run only on batteries when quiet stealth is important. The Aggressor can go from zero to 40mph in four seconds and has a top speed of 80mph. According to a 2009 Popular Mechanics article, this little beast could be “the first hybrid to hit the streets of Baghdad en masse.” In Afghanistan, it would be the bomb, dude, for hunter/killer teams.

Back in 2007, the Pentagon contracted a study that read it the riot act on fossil fuel.

Developing “new energy technologies that address alternative supply sources and efficient consumption across all aspects of military operations” was “imperative” for the Department Of Defense, the study concluded.

“We are at the edge of a precipice and we have one foot over the edge. The only way to avoid going over is to move forward and move forward aggressively with initiatives to develop alternative fuels,” said Milton R. Copulos, National Defense Council Foundation president in a Boston Globe article.

The Department of Defense is the largest single energy consumer in the United States.

“There are a lot of profound reasons for doing this, but for us at the core it’s practical,” Navy Secretary Ray Mabus told The Times. “The price will come down and the infrastructure will be created.”

Geez, that really makes sense. Wish we could get a little of that here at home for the common folk.

In June of this year, Forbes magazine ran a story with this headline: “As Congress Dithers, Military Provides Leadership On Green Energy.”

The going gets weird

It’s a purely academic question at this juncture, but ponder for a moment if we had had the foresight to realize back in the Carter years that the way to encourage alternatives to fossil fuel was to let our military get bogged down in Afghanistan.

Think about it. What if President Jimmy Carter’s national security adviser, Zbigniew Brzezinski, had taken a more circumspect view and had considered the techno serendipities of war such as the invention of penicillin, Velcro and Teflon? With a little foresight and irony, he might have realized the best thing for a fossil fuel free future was a quagmire halfway around the world.

Instead of undermining the Russians and building up Osama bin Laden and the Mujahideen, which we did, we might, instead, have had the vision to see the Russian Afghanistan debacle as something positive, something to partner with — an opportunity to subsidize military research in alternative energies, R&D that could then be applied to civilian life at home.

Instead, tax payers now have to pay $400 to get a one-dollar gallon of gasoline to the remote areas of Afghanistan, where it is pumped into a 20-ton armored MRAP costing $500,000 that gets three miles a gallon. Those good at math can see how this quickly adds up to real money.

If we had had the foresight to get into an Afghan quagmire 30 years ago, our current need to exploit the desert Wahhabi kingdom of Saudi Arabia would, with American ingenuity, have been eased and finally removed. And as we all know our long intervention in Saudi Arabia was the thing that most infuriated Osama bin Laden in 2001. He would have felt no need to attack the World Trade Towers and the Pentagon, and we wouldn’t have had to invade Iraq.

Sure, Iraq had absolutely nothing to do with 9/11. But that nation’s leader was drunk with the power of his fossil fuel vis-à-vis the United States, a nation whose leaders were also intoxicated on fossil fuel. In a way, it was like drunks fighting over a bottle.

If only we’d let Carter have his malaise!

Think of what it would mean for us today. If 30 years ago we had had the foresight to deploy our military into Russia’s Afghan quagmire, it could have provided the incentive to develop alternative energy and we would not now be looking at a military R&D curve 30 years into the future.

But, hey, better late than never.