Hours after police in a Philadelphia suburb proudly paraded Kenneth Woods, 21, in front of the news media as the man responsible for killing a college student during a hi-speed crash while allegedly fleeing police in a stolen SUV, the cops backpedalled, admitting they arrested the wrong man.

Shortly after Woods’ arraignment on vehicular homicide and third-degree murder charges, the real culprit – Donny Sayers – telephoned police, reportedly confessing to his crimes and clearing Woods of any involvement.

That confession imploded a case against Woods that police had previous proclaimed was rock-solid, resting, they claimed, on fingerprint evidence, a cell phone photo and supposedly positive identification by the policeman who had pursued the SUV immediately before the fatal crash. (The driver of the stolen vehicle had fled on foot after the collusion and escaped pursuing police.) 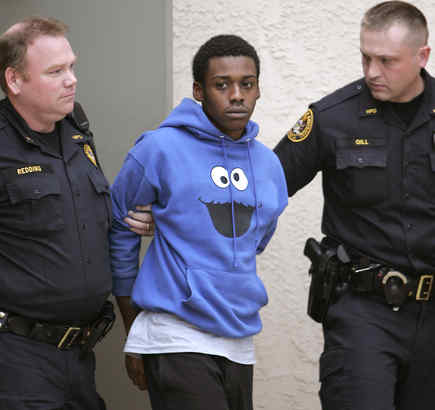 It turns out that the so-called “fingerprint evidence” police and prosecutors had touted was not on the steering wheel but was Woods’ print found on the outside of that SUV’s rear passenger side window. Woods readily admitted having been with the SUV driver hours before the crash, telling police he only knew the driver by his first name: Donny. (Woods’ fingerprint had been in the law enforcement system because of a prior conviction for smoking in a non-smoking area.)

While some say ‘the system’ worked, clearing Woods of a crime he didn’t commit, others contend the Woods incident is yet another example of an unspoken scandal in the criminal justice system…the scandal of false arrests.

False arrests – some from honest mistakes by authorities but far too many others resulting from malicious misconduct – produce hundreds if not thousands of wrongful convictions annually in America, including persons who end up on death row.

The injustice of false arrests disproportionately impacts persons of color like Woods, an African-American…charged with the killing of a white.

Three days after the release of Kenneth Woods, news broke in New York City that authorities there had agreed to pay two brothers $300,000 for their false drug arrest in 2008.

One of the narcotics officers who arrested brothers Jose and Maximo Colon resigned and pled guilty. The other officer responsible for the false arrest of the Colons, who lost the grocery store they owned during their legal ordeal, is awaiting trial. That officer also resigned from the NYPD yet is working for a suburban NYC police force that hired him despite his indictment for falsely arresting the Colon brothers.

Weeks before Woods’ release the ACLU filed a lawsuit against police in Camden, NJ just across the Delaware River from Philadelphia, charging that city’s police with widespread false arrests of innocent people on drug charges.

Surprisingly, some judges encourage and facilitate the malicious practice of false arrests.

Danita Mitchell, a single parent, fled North Carolina this past summer after judges in Charlotte falsely jailed her multiple times during the past two years on questionable charges arising from a child support payment dispute with her ex-husband.

In June, Mitchell says a Superior Court judge in Charlotte jailed her for fourteen days after holding her in contempt when she challenged the truthfulness of a Sheriff’s Office employee during cross-examination.

At that trial, Mitchell had represented herself because that judge declined to provide the indigent woman with a court-appointed attorney. That Sheriff’s employee initiated charges against Mitchell claiming, according to an official report, that Mitchell starred at her “like she wanted to kill me” weeks after that employee was disciplined for failing to properly process legal paperwork paid for by Mitchell.

“I have a legal right to confront my accuser but I get sent to jail. This is wrong,” Mitchell said in an interview with TCBH.

“In March, a judge sent me to jail for 48-hours for not swearing on the Bible. Judges put me in jail for seventy days last fall because I objected to unlawful abuses,” said Mitchell, who has filed formal complaints against three Charlotte judges, including the jurist during that June trial.

All six persons released from Pennsylvania’s death row after being found innocent on appeal, often after years awaiting execution were victimized by authorities who knowingly ignored and/or even hid compelling evidence of their innocence.

One of those exonerated, Neil Ferber, successfully sued Philadelphia police for the false arrest that placed him on death row for 1,375-days, where he developed ulcers and endured a nervous breakdown. Police arrested Ferber in 1981 on a charge of murdering an organized crime figure.

A judge’s written opinion in Ferber’s civil lawsuit, which was settled for $1.9-million, stated how “a variety of Philadelphia police officers” had engaged in a litany of illegal conduct “all for the singular purpose of obtaining Ferber’s arrest and subsequent conviction…”

False arrests constitute an expensive, corrosive rot in the criminal justice system that elected officials ignore largely because many of them fear being labeled “soft on crime” – an ironic stance since false arrests end up being soft-on-criminals by allowing the real culprits to remain at-large.

A proposal in the “Contract With America” released recently by the GOP would make it much easier to succeed with false arrests by permitting police to utilize illegally seized evidence in courts.

Incredibly, many false arrests are simply the result of the venal police practice of trying to pad their pay checks with overtime for making court appearances. Those NYC cops who framed the Colon brothers, for example, were just angling to collect overtime, according to the two men’s lawyer.

The false arrest of Kenneth Woods is all too typical in exhibiting overzealous police work to quickly solve a horrific crime, false statements by police, and the pervasive rights-sabotaging, guilty-till-proven-innocent mentality that prevails among authorities in America’s “justice” system.

While typical, several elements of Woods’ encounter with law enforcement were startlingly atypical.

First off, Woods had an ‘avenging angel’ in Robert Herdelin, a wealthy businessman who had once employed Woods’ grandmother. Had Herdelin not swung into action on his behalf, Woods would probably still be in prison awaiting trial for crimes he didn’t commit. Police had dismissed his pleas of innocence and ignored his alibi witnesses, who offered to take lie-detector tests.

Herdelin, after the young man’s arrest, began his own investigation, interviewing witnesses and ultimately identifying the real culprit–in other words he did the due diligence and legwork that police detectives should have done in the case. He also offered to post his multi-million-dollar Jersey shore home as collateral for Woods’ release on bail. Authorities were holding Woods on $1-million dollars bail.

Herdelin’s efforts forced detectives to reexamine their case against Woods, who Herdelin calls his “god-son.”

After Herdelin’s intervention, authorities tap-danced away from declaring that cell phone photo was Woods who told police that the cell phone recovered from the stolen SUV was not his. The confessed culprit, Donny Sayers, admitted that the cell phone belonged to him and he had left it in the SUV when he fled following the fatal crash.

Also, authorities later acknowledged that the policeman who identified Woods as the SUV driver (from mug shots not a lineup) had in fact only seen the driver momentarily as the vehicle passed him at a high rate of speed on a darkened road shortly after midnight, prompting a chase that ended in the death of a Villanova University student and serious injuries to that student’s friend.

A skilled prosecutor could have used that shaky (midnight) identification by the policeman to sink Woods during a trial because many jurors accept testimony from police without question.

Herdelin’s intervention in all likelihood also contributed to Sayers’ confessing and surrendering to police, which compelled authorities to release their original suspect.

Herdelin credits Haverford Township detectives with examining the evidence he provided, while Woods, for his part, claims he holds no anger against police who were just “doing their jobs.”

Herdelin, however, did find aspects of police handling of this case to be “disgusting.”

“How can someone be involved in a 100-mile-per-hour crash and not have a scratch on them?” Herdelin asks, wondering why doubts weren’t raised in the minds of investigators by the lack of any accident- related injuries on Woods when they arrested him, within just hours of the incident.

Also, during remarks to reporters prior to his going to the county lock-up to take Woods home, Herdelin pointed an accusing finger at the news media. “To desecrate a person’s name, forcing them to lose their reputation and their job, is outrageous,” he said.

Woods, immediately after his arrest, was fired from the McDonald’s restaurant where he had just begun working as an employee.

Delaware County DA Green, during his press conference, said he hoped the restaurant that had fired Woods would rehire him, not holding Woods responsibility for the mistake made by authorities. Herdelin said that if McDonald’s didn’t rehire Woods, he would give him a job.