I found them today: five plump zebra-striped caterpillars munching with gusto on milkweed leaves in an area of the tall dark-leaved plants growing in my front yard.

The beautiful orange-and-black monarch butterfly that I saw a few weeks ago flitting from plant to plant in that milkweed patch I have nurtured and allowed to expand naturally in my front yard over the last few years, apparently deposited an egg on each plant it landed on, and these ultimately hatched out a batch of voracious little larvae this year for the first time. 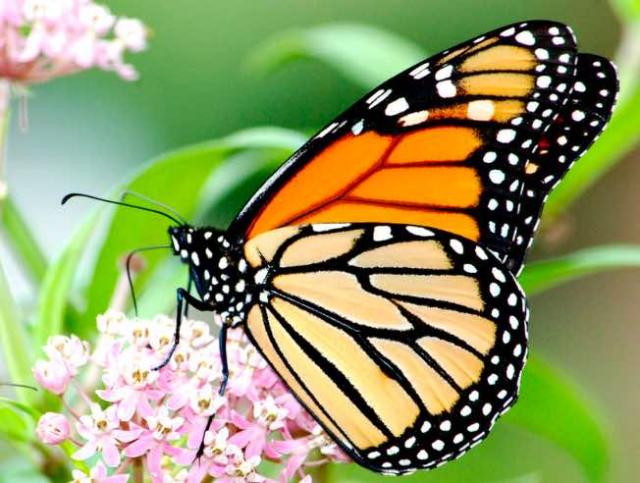 In a time when the evidence of the damage caused by mankind’s profit-driven environmental depredations — especially climate change — is becoming truly damning and deeply depressing, it’s a spirit-lifting bright spot for me to see the success of this one small effort to aid one beautiful and remarkable insect in its desperate struggle to survive.

The monarch, truly one of the most beautiful creatures on earth, has an almost unbelievable life cycle. Born in late summer, it has for millennia flown by the millions from the temperate part of North American continent in the US and Canada all the way down to Mexico — or if they are on the west coast, to California. Those who make the journey successfully to Mexico gather in a relatively small tree-covered forest region, choosing the oramel pine as their resting place. After over-wintering, they begin a migration back towards their summer habitat in the north.

No single monarch makes this epic round-trip migration, though. Rather, the delicate insects mate and lay eggs along the way and die, with their offspring beginning the return journey the following spring. They too don’t make it all the way north either, but mate and lay eggs en route, with their offspring continuing the journey north. Finally these undocumented immigrants flooding across the border from Mexico mate and their offspring are the ones I saw laying eggs on my milkweed plants, and whose offspring in turn are now gobbling away preparing for their short time in the chrysalis stage before becoming butterflies and beginning their own journey south.

Years ago, when I was a kid living in Connecticut, late August and early September were the time that fields, which were full of milkweed back them in the era before Monsanto’s ubiquitous Roundup, were also full of monarchs and their caterpillars. Almost every year, I’d go out and find a caterpillar or two, with their black and yellow stripes on a white background. I would put my find in a jar or aquarium filled with milkweed leaves.Then I’d watch them eat, grow and become a chrysalis, and finally, in a spectacular metamorphosis, crack out of the jewel-like jade-colored encasing chitin to hang from a branch and allow crumpled wings to fill out with blood and dry — an amazing sight! Finally I’d let them go to free to fly off on their journey. I even managed to help my young daughter, back in the late 1980s, have that same awesome experience several times.

But of late, the monarch has been falling on hard times. Expanding suburbs and towns have destroyed much of the milkweed that is the only food monarch caterpillars will eat and the only plant adult female monarchs will lay eggs upon. It’s not that you couldn’t have milkweed growing in the ‘burbs. Rather, the American obsession with manicured lawns doesn’t abide the tall plants with their avadado tree-like leaves, nor the blizzard of white wind-blown parachute-like seed transporters that emerge in the fall from the pods produced by their fragrant pink flowers. I can’t understand this prejudice against having such a beautiful weed/flower in one’s yard, but it just isn’t tolerated by most people, who prefer to just dump the Roundup on their weeds, whether milkweed or dandelions

Adding to the crisis, poor Mexicans looking for wood to burn are cutting down the forests where migrating monarchs used to gather in winter — those that do migrate. Some attempt is being made in Mexico to protect the oramel pines Monarhs favor by creating national parks, but it is a case of too little and maybe too late. Without those huge overwintering populations to replenish the northern population in summer, the monarch’s fate hangs in the balance at this point. The butterfly could go the way of the Carrier Pigeon.

Efforts are being made finally in the US to make more milkweed available for the monarchs, planting the hardy weed along highways, encouraging city dwellers to put them on their balconies in pots, and perhaps most importantly, encouraging homeowners to allow milkweed to grow in their lawns. 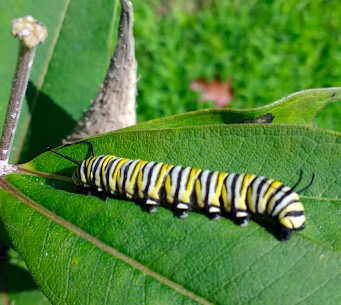 I encourage people to do those things. Not only is milkweed a beautiful plant in its own right that requires no attention if just left alone — just the avoidance of them by any mower, But for your efforts, if your patch is big enough, you’ll eventually get to see the spectacular sight of the large adult monarchs in all their Halloween-colored spendor as I’ve been doing this year. And if you look more closely a little later, you may also see the almost equally beautifully striped caterpillars and, if you’re extra lucky, their chrysalises and the emergence of new butterflies.

Plus there’s the immense satisfaction of knowing that in one very small way, you have fought back against the destruction of nature by our greed-driven species.