Media news reports and commentary as well as political statements coming out of Washington on the surprising blossoming of peace talks between North and South Korea tend to focus on the question of whether North Korean leader Kim Jong-un is really “serious” about eliminating his recently developed nuclear weapons arsenal, or whether he will just try to keep what he has while decrying US military threats to his regime.

Missing in all the verbiage has been any reporting on the long US history of nuclear weapons in South Korea, where the US still, 65 years after the end of fighting on the peninsula, maintains at least three military bases and 28,000 combat-ready troops.

That history includes the US keeping as many as 950 nuclear bombs and a variety of delivery systems — rockets, planes and even howitzers that fire nuclear shells — within miles of the North Korean border. 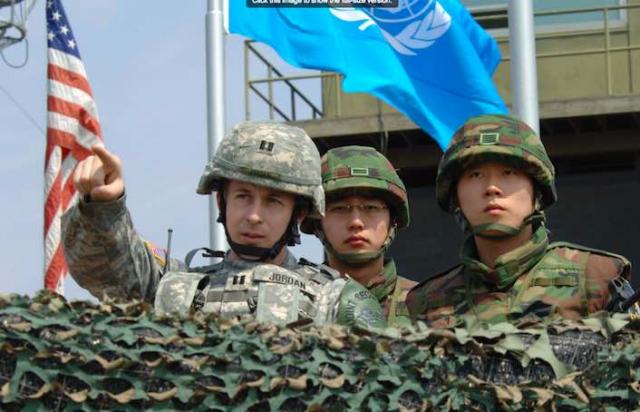 The US military still calls the shots in South Korea, even over that country’s own military

An excellent 2017 report by the Bulletin of Atomic Scientists, based upon publicly available Defense Department documents, gives detailed history of the basing of nuclear weapons — strategic and tactical — in South Korea during at least 33 years of the 65 years that the US and North Korea have been officially in a state of war. That report makes it clear that North Korea continues to have a bull’s eye on it for US Trident submarines patrolling the north Pacific, and for nuclear-capable aircraft based on Guam, Okinawa and possibly or potentially in Japan, where the US has a major naval base.

The report states that US nuclear weapons were finally fully removed from South Korea in 1991, on orders from then President George H. W. Bush, but discussions to return them took place on several occasions when tensions rose on the peninsula, including as recently as 2011 during the Obama administration.

In US reporting on the peace negotiations between North and South Korea, and in speculation about whether Kim Jong-un is “serious” about “giving up” his country’s nukes, there is typically a mention that while “denuclearization” for the US means Kim giving up his nukes, the term for Kim and North Korea might mean a demand that the US pull its troops from South Korea and shut its bases there.

As the New York Times put it in an article on Sunday:

Nor has it clarified how it defines a ‘nuclear-free Korean Peninsula,’ and especially whether that means a withdrawal or significant reconfiguration of American troops based in South Korea, as it has demanded before.

Given the long history of US basing nuclear weapons in South Korea, it would be understandable for Kim to worry about leaving those troops there. What the US has in South Korea is not really meant to be a bulwark against another North Korean invasion. After all, given China’s enormous influence over what US American journalists have long called the “hermit kingdom,” any attack on the North on the South these days is highly unlikely. Besides, what in the final analysis would 28,000 troops do against an army of over one million, backed by China? Rather, the US has, since the Korean War Armistice in 1953, used its bases in South Korea as a platform for strategic threats against both China, the USSR and later, Russia. As long as those bases are there, maintained and operated by those 28,000 US troops, it is easy on short notice to move in nuclear-capable aircraft and ships that would put American nuclear weaponry on China’s and Russia’s doorsteps. Those bases also give the US the ability, should it wish, to bring in weapons that would threaten North Korea with either nuclear or non-nuclear obliteration on short notice (as witness the giant bombs the Pentagon was recently said to be moving within range of the North when Trump was threating Kim with “fire and fury” just a few months back).

Kim, no doubt (who received an excellent education in Switzerland in his youth), has a lot of history in mind as he negotiates with the US. It’s a history of his country’s having been completely leveled during the Korean War, to the extent that towards the end of the conflict US bomber pilots were returning to Japan and other bases with full loads of bombs that they were emptying into the ocean for safety’s sake before landing, because they couldn’t find any targets to hit anymore. Every footbridge and two-story building in the North had been destroyed, along with the death of one-third of the population. There’s also the history of the US invading and destroying countries whose leaders don’t kowtow properly to US demands, from Nicaragua, Grenada and Panama to Iraq, Libya and lately Syria. And Kim certainly also has Iran in mind, where an agreement was reached by six countries led by the US with the Iranian government under which Iran agreed to halt its processing of nuclear fuel, and to hand over to Russia all of its enriched uranium and plutonium, in return for a lifting of sanctions, only to have the next US president back out of lifting the sanctions, and then to threaten to back out of the agreement altogether, with an attack on Iran being raised as a possible option.

It would be truly shocking if, given all this history, Kim were to agree to simply get rid of the nuclear weapons and missiles his country has recently successfuly developed while allowing the US to continue its military basing in and its operational control of the military of South Korea, all on a promise that the US would not attack the North anytime in the future.

US agreements these days are widely seen as not being worth much, and that is certain to be a concern for the Kim government as it negotiates with the US and confronts US demands that it give up its nuclear weapons.

Left unsaid in most US reporting on this situation is also the historical basis for the US having those bases in South Korea. It’s not a matter of South Korea being a staunch ally of the US and having invited the US to put troops there and to construct bases there. South Korea has no choice or say in the matter. The US, since the original 1950 UN Security Council Resolution authorizing a UN force to combat the North, has been the designated leader of the UN expeditionary forces in South Korea. As such, the Pentagon has retained control over the South Korean military, and has a UN-sanctioned right to have troops occupying South Korean territory (with immunity from South Korean law). That’s why Trump was able to order the placing of highly controversial Terminal High Altitude Area Defense (THAAD) anti-missile batteries in South Korea over the objections of both the South Korean people and the government of Moon Jae-in — missiles that would be of little or no use against any North Korean attack, but which actually threaten and target China, much like the anti-missile batteries that the US has installed in Eastern European countries which it continues to insist publicly are to defend against non-existent Iranian missiles, but which actually pose a deadly threat of a potential first strike against Russia. (The THAAD missile emplacements, as well as the major US bases in the South, would also make South Korea q prime target in any future armed conflict between the US and China or the US and Russia, something South Koreans are acutely aware of.)

A complication for the US is that if South Korea’s Moon and North Korea’s Kim, on their own, were to agree to sign a peace agreement, it would be difficult for the US to insist that a state of war still exists on the Korean peninsula. It would make a joke of the continued UN Security Council resolution that places the US military in charge of a UN-led security force there, and of any continuation of the US bases in South Korea.

Few Americans are aware of this, but there is a deep and fairly wide-spread resentment in South Korea, not just in the North, against the United States, which is widely seen as having installed and then backed, since the end of World War II, a series of brutal dictators in Seoul, and even of having signed off on the South Korean military’s slaughter of hundreds and perhaps as many as two thousand people following an uprising in the South Korean city of Gwanju against dictator and military coup leader Chun Doo-Hwan, in 1980.

US troops, who are immune from prosecution under South Korean law, are also widely resented there. Many South Koreans also resent their oountry’s being treated as a pawn in US relations with China and Russia. While there is a relatively small cohort of right wingers in South Korea who vehemently oppose any easing of relations with the Communist North, South Koreans I know in the US, like a majority of their compatriots in Korea, have been wildly excited by the recent rapprochment between the two long-divided halves of their nation.

My guess then is that this will be North Korea’s negotiating strategy: If Kim Jong-un cannot get the US to agree to sign a full peace agreement with his country that would include the removal of those US bases, and a multi-lateral agreement backed by China and Russia in which the US agrees not to again threaten to invade or topple the government of his country, he will hang onto his nukes as insurance policy against US attack, and will simply turn to President Moon Jae-in and try to work out a bi-lateral peace treaty.

Then, with his nuclear weapons as a bargaining chip still intact, he could rely on international pressure and pressure from the Seoul government, to force the US to shut its bases and leave South Korea.

The author was an Asia correspondent for Business Week magazine based out of that magazine’s Hong Kong bureau for five years (1992-7). He also lived in China for a year and a half and is fluent in Chinese.

If Sanders Wins a Big Plurality of Delegates, He Must Be the Democratic Presidential Nominee
[caption id="attachment_4817" align="alignnone" width="521"] In the cheap shot of the night, Bloomberg called Sanders a Communist earning a sharp rebuke from the Senator who called it a 'cheap shot.' It…
All Dave LIndorff's Posts