John Stumpf, the CEO of Wells Fargo Bank, one of the nation’s biggest “too-big-to-fail” banks, is showing us the way in to this bright new stand-up world.

When the government discovered that his bank had since as long ago as 2011 been boosting its bottom line by creating millions of credit card accounts in the name of but behind the backs of existing Wells Fargo clients, and then running up charges on those accounts, charging the unawares named holders of the cards late fees and interest for those charges, it slapped the bank with a $185-million fine. But as with prior criminal behavior by the nation’s biggest banks (think Citibank, Goldman Sachs, Morgan Stanley and JPMorgan Chase), it didn’t indict any bank executives this time either.

But hey, this John Stumpf is a stand-up guy. He has told the media and the Senate Banking Committee that he takes “full responsibility” for the gigantic defrauding of the country’s third largest bank’s customers, and says that he is “accountable” for the high-pressure sales tactics demnded of low-level bank salespeople to make them produce sales of bank products — the policy that led over 5300 of those employees to set up the fraudulent accounts.

But here’s the beautiful thing: Standing up and saying “I take full responsibilty” and “I’m accountable” is really easy! You don’t have to actually do anything and nothing happens to you! In fact, Stumpf admitted under questioning by Senate Banking Committee member Elizabeth Warren, the Democratic senator from Massachusetts, that he earned $19.3 million last year alone, $ 4 million of that a bonus for doing such a fine job of running the operation — this in a year in which the bank and its board of directors was well aware that it was being investigated for the gigantic fraud. “Taking responsibilty” and being “accountable” doesn’t apparently involve actually taking responsiblity or being accountable, as in stepping down from one’s lucrative post as CEO, much less leaving one’s firm. It doesn’t apparently even mean taking a pay cut. Pretty neat really.

That’s not true though for the thousands of employees who engaged in the actual act of creating the fraudulent charge accounts. They have all been fired by the bank, no doubt at Stumpf’s direction. They took a substantial paycut for their criminal behavior, which one might say is a kind of “taking responsibility” for what they did, though perhaps they didn’t do it voluntarily. 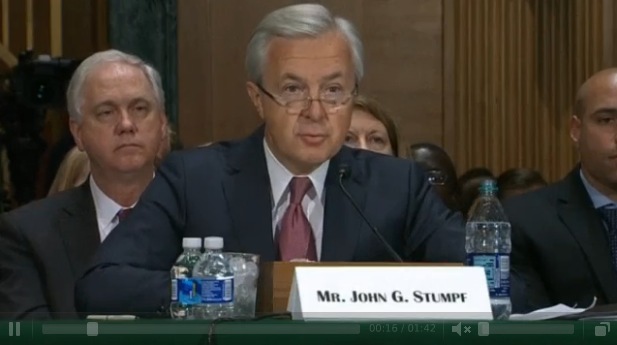 But Stumpf? While he clearly turned a blind eye to the scam for five years until the federal authorities got wind of it, once it became public knowledge outside the bank, he stood up and said he “takes responsibility” for what happened. Not just that. He said he’s “accountable” for it. Good man!

This makes me think we should all start doing this. It would make the country so much better if we were all stand-up people like Stumpf.

So next time you get stopped for speeding, don’t argue with the cop who pulls you over. Just say, “Officer, you’re right. I was speeding, and I take full responsibility for that. I will be accountable for my lapse of behavior on the road.” Then thank the officer and drive off. You’ve done the right thing. No doubt the cop will just get back in her or his car and drive off looking for other reckless drivers, impressed by your willingness to take responsibility.

Same thing if you get an audit from the IRS and they tell you that you under-reported your income and claimed deductions you didn’t have, and that you owe the Treasury Department $20,000 in back taxes, penalties and interest. Thank them taking the trouble to audit you and for pointing out your errors, tell them you take full responsibility for those errors, assure them that you are accountable, and then hang up the phone. You’ve done your civic duty. You’ve stood up and taken your hit. You’re a responsible citizen, and surely you won’t be bothered by the IRS again.

Violent criminals could do the same thing. Say you’ve killed some store clerk during a botched attempt to rob the till at the checkout counter. When you get hauled into court, don’t plead innocent, get all upitty and demand a jury trial. You know you did it. I’m not saying you should plead guilty. John Stumpf didn’t do that after all. Just man up like Stumpf and tell the magistrate at your arraignment, “Your honor, I take full responsiblity for that murder. I’m accountable.” You could even say you’re following in the footsteps of the noted banker John Stumpf. Then expect, like Stumpf, to be allowed to go on your way and continue with your life of crime. What right-minded judge could disagree?

If John Stumpf can run a banking operation that is little more than a criminal syndicate, and can stand up, take responsibility, and continue running that operation without having to even pay a fine, why shouldn’t we all be able to do the same thing when we cross the line and get nailed doing something illegal or vile?

Other banks have done pretty much the same thing, so it’s not like this is a new idea. Just last year, the Justice Department charged five other big banks, Citibank, JPMorgan Chase, Barclays PLC, Royal Bank of Scotland, and UBS, with felony fraud for illegally manipulating the international currency markets (apparently Wells Fargo was too busy defrauding its own customers to get involved in manipulating currency markets). All five of these banks pleaded guilty to those crimes, and paid a collective $2 billion in fines. But while their top execs all “took responsibility” for their institutions’ crimes, they personally didn’t have to pay fines or do any time, or even lose their jobs. In fact, after his bank in May 2015 copped a plea (remember, corporations are people too!), JPMorgan Chase’s CEO and Chairman Jamie Dimon, was awarded a $7 million raise for the year by the board of directors he chairs, raising his salary 35% to $27 million from just $20 million in 2014. Oh wait. Dimon never did take responsibilty for that criminal behavior by the bank. He blamed it all on some little guy. Oh well.

Maybe what we really need is the old traditional Japanese system where taking responsiblity for corporate fraud involves sticking a samuri tantō into one’s gut and twisting it a bit. They could even hand them out at graduation to all newly minted MBAs.