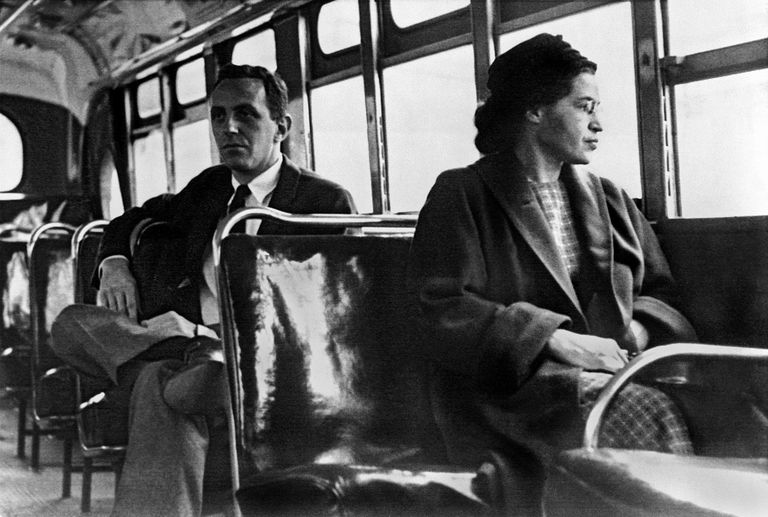 Rosa Parks says no to racism. Stand Up!

I live in Denmark but I wish I were in my old hometown, Los Angeles. I would be there beside my younger brothers and sisters putting police cars on fire, plundering stores that discriminate against African-Americans, and shouting, “We Can’t Breathe”! “No More Killer Cops!” “Long Live George Floyd”!

During the 1965 Watts Revolt, I had the privilege and honor of taking sides to resist the racist murderers of then when I was 25 years old. We, as you today, were indignant humans ready to fight for justice. In Watts, we resisted for a week without killing one white person, yet 34 of my black brothers and sisters were murdered by white cops.

As far as the white cop who started that rebellion was concerned, he was “Just doing my job.” This is what police officer Lee Minikus told the Los Angeles Times 25 years later. “To [the police] officer who sparked riots it was just another arrest.”

On August 11, 1965, Minikus stopped Marquette Frye for reckless driving. He tested him for alcohol, and arrested him for drunk driving. Frye’s mother, Rena, came to the scene. As she chastised her son for drinking and driving, someone shoved her, and she jumped on a policeman’s back. Another cop hit her with his baton just above the eye. The gathering crowd came to her aid. Soon, much of the city was on fire: 250-300 cars and a dozen or so public buildings burned.

I was one of some white people who participated in the revolt. I got man-handled by police because I was in a car with black folks driving in Watts. They didn’t take me to jail, though, because there were many more black people watching them.

Today, there are many more white people fighting alongside black brothers and sisters than 55 years ago. Nevertheless, the racist violence by white cops against blacks is the same.

In Minneapolis, May 25, 2020, a storekeeper claimed to police that George Floyd tried to buy cigarettes with a counterfet $20 bill. The police arrested Floyd without knowing if, in fact, the bill was false or if Floyd knew that it was false. As witnesses stated and videos show, Floyd did not attempt to resist arrest although the police lied that he had. He was thrown on the ground, and cop Derek Chauvin held him down with his knee on his throat.

Demonstrators throughout the United States hold signs and shout Floyd’s last words, “I can’t breathe”, the same words that Erik Garner cried out, in 2014, as he was being strangled to death in the same manner. Garner’s crime, suspicion of selling individual cigarettes on a New York city street.

As protests in Minneapolis grew and spread to scores of US cities, the killer cop was fired, and later charged with third-degree murder and manslaughter for choking Floyd for nearly nine minutes. Floyd cried out several times that he couldn’t breathe. Chauvin is heard responding, “Shut up!”

The other three cops assisted their partner by holding Floyd’s legs and threatening by-standers. They were fired for their murder complicity but not charged with any crime.

George Floyd’s murderer already had 18 brutality complaints against him, including two involving killings of “suspects”. This cop probably never would have been fired let alone charged with any crime had people not taken to the streets to resist these murdering officials of the racist empire. It is an illusion when well-meaning liberal-progressives tell those of us, who meet police violence head on, that violence does not work. Violence is what the United States of America is founded and built upon.

Shortly after the Watts Revolt, three of us in the W.E.B. Du Bois club of Los Angeles wrote a pamphlet about the resistance entitled, “The Fire This Time.” The title was taken from James Baldwin’s 1963 book about the civil rights movement, “The Fire Next Time”. (Appledore Books has our 25 cent pamphlet for sale as a collector’s item for the absurd price $250. )

In the pamphlet, we cited our mentor, DuBois, writing in the National Association for the Advancement of Colored People’s magazine “The Crises”, in 1913. (He had founded the NAACP, in 1909, which became the largest organization of and for African-Americans.)

“Fellow Negroes, is it not time to be men? Is it not time to strike back when we are struck? Is it not high time to hold up our heads and clench our teeth and swear by the Eternal God we will not be slaves and that no aider, abettor, and teacher of slavery in any shape or guise can longer lead us?”

William Edward Burghardt Du Bois (1868 – 1963), born in Massachusetts, was the first African-American to earn a doctorate degree. He graduated from the universities of Berlin, Harvard and Atlanta in history, sociology and economics. The Souls of Black Folk is his best literary work.

Du Bois’ activism against racism became the core of his life after the lynching of Sam Hose, near Atlanta, Georgia, in 1899. Hose was tortured, burned and hung alive by a mob of 2000 whites. Du Bois, then in Atlanta, walked to the house of the Atlanta Constitution editor, Joel Chandler Harris, to speak to him about this horrible lynching. On his way, Du Bois saw to his horror the burned knuckles of Sam Hose in a storefront display.

Our socialist Du Bois youth organization supported oppressed peoples’ rebellions, realizing, as we wrote about the Watts uprising: “The well of patience of an oppressed people ran dry and frustration gave way to anger and a volcanic eruption so furious that there were troops in the streets of Los Angeles, and tanks in the school yards of the city.”

The phrase “police brutality” has been around for a long time. “The way to get rid of these words is to get rid of brutal police.”

We listed 24 demands. Most of them remain relevant today:

1) White policemen in the ghettos must be replaced by African-American police.

2) Police shall have passed at least two years of liberal arts at a college.

3) Affordable public housing must be available to all.

4) Jobs for all or a living income for all.

5) Affordable health care for all.

6) There must be legislation prohibiting discrimination against people in any form, including using racist language.

7) Police who murder citizens must face the same penalties as civilians.

What were the results of our protests? Police were more cautious for a time. Meanwhile they received more tax funds for more guns. The same is happening today.

My colleague Dave Lindorff is writing about these events as well. In his piece this day, he writes: “Looting has always been viewed as the most terrifying of all behavior on the part of the great unwashed by those who live in fancy homes and gated communities. This is because looting displays the sudden awesome power of the poor when they lose their fear of the centurions hired by the rich to protect them and their property.  But looked at another way, these actions by the desperate poor are simply acts of redistribution called for when the so-called “free-market” system fails to deliver on the promise of “efficient allocation” of resources, goods and services.

Our righteous sister Nina Simone sings to us,

“Mississippi Goddam:
Picket lines, school boycotts
They try to say it’s a communist plot
All I want is equality
For my sister, my brother, my people, and me…

RON RIDENOUR is a US expatriate journalist and anti-war activist living in Denmark. His books, “The Russian Peace Threat: Pentagon on Alert” and ‘Winding Brook Stories’ are available at Amazon and Lulu.  His other work can be found at ronridenour.com; ronrorama@gmail.com