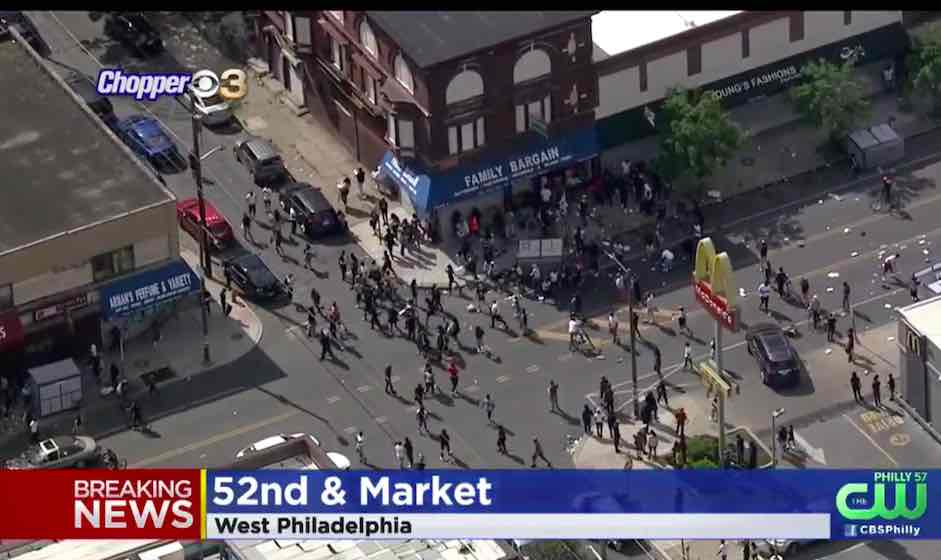 Across the US, cities, especially fancy malls and outlets of major retail chains, are being busted into and ransacked, as police squad cars get flipped over and torched, in scenes not seen in the US since the mid to late 1960s.

Many of the perpetrators of these actions are black residents of these cities, but a surprising number compared to earlier such uprisings are white this time around.

The wave of shop looting and destruction of property was sparked by the shocking video of 46-year-old black security guard George Floyd being slowly killed by the brutal, violence-addicted and racist Minnesota police officer Derek Chauvin, who after detaining Floyd on suspicion of the alleged non-violent act of trying to pass a counterfeit $20, pressed a knee on his neck for almost nine minute until he Floyd ceased breathing and died.

But the protests have moved far beyond just Floyd’s dreadful murder.

All over the US media, voices of black leaders, white liberal politicians and news commentators are decrying the violence, the destruction, the looting and the “chaos,” claiming that it “changes the narrative” from police violence against blacks to one of needing to stop the “violence.”

The critics are right that the narrative has changed, but it is not that Floyd’s horrific murder is being forgotten. It’s that his death has awakened a fury at the American police culture of violence and authoritarianism that has been smoldering among people — especially poor people — of all races for not just years but decades. It has also stoked growing anger at an economic system that is focussed solely on the profits of corporations and the rich, and that is more concerned about “getting the economy going again” than about the safety and the daily need to survive of ordinary working-class people who’s living standard today is lower than it was half a century ago, and that is dropping even as the stock market hits new records.

Looting, which has always been viewed as the most terrifying of all behavior on the part of the great unwashed by those who live in fancy homes and gated communities. This is because looting displays the sudden awesome power of the poor when they lose their fear of the centurions hired by the rich to protect them and their property. Seeing poor people , who cannot afford food for their families or clothes for their kids in “normal times, often having to depend on used winter coat charity drives and donated schoolbags and supplies to send them to school each year, suddenly storming into Target or Walmart stores and just grabbing what they need, leaving the places a wreck in their haste to get out and away, shocks and terrifies the comfortable.

But looked at another way, these actions by the desperate poor are simply acts of redistribution called for when the so-called “free-market” system fails to deliver on the promise of “efficient allocation” of resources, goods and services.

Adam Smith’s “invisible hand” turns out to actually be a gloved fist when it comes to the poor in America. In a political system like what we have in the United States, where money buys influence and even elected officials, and where 99% of the legislation passed by Congress actually gets written by lobbyists for various special interests and rarely works in the interest of the broader public except by accident, when the minimum wage is set so low that those who work at its hourly rate of $7.25/hour or even a few dollars more, for a full and hard-to-find 10 hour week still earn less than an already unreasonably low official federal poverty level, when the jobless rate for black and latinx workers consistently is double what it is for white workers, when blacks are dying at two, three or four times the rate of whites in a pandemic because of poor diet, crowded housing conditions and lack of access to timely health care, when young minority girls must use old rags for their menstrual periods or reuse tampons because their families cannot afford to buy the sanitary napkins or tampons that middle-class women take for granted, when young minority kids can’t afford a bike and don’t have parks in their neighborhoods so they have to play in the streets and risk being run over, people get understandably fed up.  So fed up that they take things into their own hands.

That is what looting is.

If you can’t feed and clothe you family on what work you are able to find and at the pay that you can get, and the chance comes to just walk into a store that you may never have even thought you’d see the inside of and take what you and your family need, you’re going to do it.

Think about it. Many families in poor areas like North Philadelphia and similar desolate low-income areas of other similar cities across this country don’t even have a supermarket to go to within walking distance. They either have to buy their provisions at expensive small mom-and-pop stores and bodegas, or make a long trek on foot or by bus to where there is a big market, either leaving the kids home or dragging them all along.

President Trump and Republicans in Washington and some state governments are calling for militant crackdowns on the lawlessness. Even some Democrats are doing the same, or are pleading for the looters and “rioters” to calm down and “honor Dr. Martin Luther King’s legacy.”  But King himself knew that people were being asked to bear too much. While he eschewed violence, he understood its cause.

Repression is not the answer. That approach just pushes the problem down the road while allowing the underlying cause to fester and get worse.

We are in a revolutionary moment, as depression grips the nation. According to some accounts we are approaching an unemployment rate of 50 percent of US workers, 40 percent of whom are unlikely to get their former jobs back even if the economy starts to recover, which may not happen until next year at the earliest.

Anyone who thinks that more and more violent police action to repress this uprising will work is dreaming.

Only a dramatic turn away from the anything-goes capitalism we now have, and a thorough rejection of the politics of money in Washington and the state capitals of the nation on the scale of at least the New Deal of the 1930s will put this genie back in its bottle.

The poor are desperate and they have lost their fear of the police.

It speaks volumes that the cities that have not been burning and looted are ones where the local police forces greeted Black Lives Matter protesters with open arms and with helmets, truncheons and body armor left behind, who condemned Floyd’s murder and called for peace — cities like Camden, NJ, Flint Michigan, Belleview, Washington,  Chatanooge, Tennessee and Green Bay, Wisconsin.

It’s not enough, but it buys time for those cities to address the very real grievances of their residents.

The real need now is to start tackling the desperate need to change this stinking, selfish and repressive US political-economic system so that the heartless “invisible hand” of capitalism is removed and replaced by helping hands that redistribute income, wealth, goods and services fairly to allow all those who live her to have decent, comfortable and hopeful lives that offer their children the hope of better futures.

It’s become a commonplace to hear people say this current coronavirus pandemic “has shown that we’re all in this together.” But that has been demonstrably untrue. Sure a few rich folks got the disease and a few may even have died, but the real victims have been the poor, minorities and the elderly. The torching of our cities, and the looting of the malls is what is really sending the message that we’re “all in this together,” by making it clear that if this country continues down its current path towards ever increasing racial and economic inequality, no one, regardless of their wealth and power, will escape the consequences.