Philadelphia — You wouldn’t know it to read the corporate media coverage of Bernie Sanders’ blow-out 50%-margin wins Saturday, March 26 in the three states of Washington, Alaska and Hawaii. While purported “news” organizations like the New York Times and CNN are propagandistically reporting Sanders having won just 25 delegates in Washington, and on that basis are claiming that he only gained some 30 or so delegates on Hillary Clinton, the truth is that he won 72 of Washington state’s delegates along with 17 in Hawaii and 13 in Alaska, for a total of 102 new pledged delegates, compared to just 39 for Clinton, and that as things stand today, the tally stands like this at Clinton: 1266 pledged delegates, Sanders: 1038 pledged delegates. The difference between the two? Clinton is down from a high at one point of some 330 to just a 228-delegate lead, with 1638 pledged delegates yet to be chosen in coming primaries and caucuses.

While Sanders, who has to win the remaining primary contests by an average of 60%, still has to be considered a long-shot, the fact that he has won the last five of six contests by scoring in the 70-80% range, in some cases reducing Clinton to percentages in the teens, shows this is doable. Plus, his recent big wins actually brought his performance requirement for winning the nomination down from an earlier need to win remaining contests by an average of 68% to “just” 56% of the vote.

What this means is that if Sanders can manage to win by a significant amount in New York and Pennsylvania, New Jersey and other eastern and central states, as well as in Oregon, in April and May, this campaign could come down to California on June 7, when 475 pledged delegates are at stake.

What we’re seeing as the national race tightens is Sanders starting to take a much more combative stance against Clinton and the Democratic Party leadership, in response to dirty tricks, Clinton lies, and a rigged election cycle. We’re also, according to exit polling, learning that the more Clinton campaigns, the more votes she is losing, while the more Sanders campaigns, the higher his poll numbers go, and the more he wins by in primaries and caucuses. (the latest national poll, by Bloomberg, taken two days before the March 29 caucuses, has Sanders leading Clinton among all voters by 49-48%). Most of the states Clinton has won, she’s won because of early voting that was done by mail before Sanders and his campaign had begun their publicity in earnest in each state. This is critical because, since his campaign was largely blacked out until he stunningly tied in Iowa and won in New Hampshire in early February and since most mainstream media coverage of him since then has been negative, he has had to rely on rallies and alternative media to get his story out. 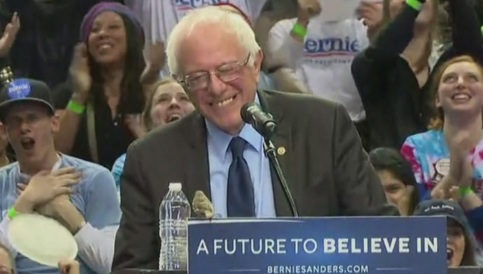 But his campaign strategy — hitting the issue of a rigged economy and a bought-and-paid political system — has been gaining traction with primary voters over time, and the money is pouring into his campaign in small donations from millions of backers (he’s raised over $140 million so far with no corporate funding and no PACs), giving Sanders the funding needed to compete in advertising to get his positions out, and, increasingly, to make his case against Clinton and her corporate backers.

Just this week, Ralph Nader, who early on had criticized Sanders for running in the Democratic primary instead of as a third party or independent candidate, wrote an article saying Sanders had been right. The Democratic primary, he said, meant Sanders got to tell the public his positions in televised debates, he had the credibility to get massive financial support from his young and working class backers, and he hasn’t had to waste energy getting his name on ballots, something Nader had to do battling an army of Democratic Party lawyers in 28 states during his independent run in 2000.

During the Hawaii primary, the Sanders campaign began airing a TV ad featuring Hawaiian Rep. Tulsi Gabbard, who recently resigned as vice chair of the Democratic National Committee, charging that the DNC was biased in favor of Clinton and was improperly skewing policies, like debate scheduling, in favor of her over Sanders. The ad was a powerfully anti-war message, arguing against US wars aimed at “regime change.” Sanders himself is increasingly adding that anti-war message to his stock campaign speech, and pointedly said that a finch that landed on his podium during a huge ralley in Portland, OR, was a “dove of peace.”

At this point, Sanders appears even to be backing away from an earlier pledge (controversial among his supporters) to back Clinton if he loses the nomination. In several interviews, he has lately been setting pre-conditions for an endorsement, such as that Clinton would have to back his calls for Medicare for All, free public college education, a $15/hour minimum federal wage, tougher regulation of the financial industry and “a vigorous effort to address climate change?” — positions that she will not be able to agree to. He has also been talking more about foreign policy and a need to end US wars and imperial adventures. All that bodes well for his prospects in states like New York and California and other liberal states.

If things go well for Sanders, and he even comes close in pledged delegates by winning handily in most of the remaining primaries, Clinton will be seen to be winning only based on having done exceedingly well only in the “front-loaded” southern states which neither she nor Sanders stand a chance of winning in the general election, making those delegates’ votes really marginal if not meaningless. At that point it would be fair, as the Sanders campaign plans to do, to press the unpledged so-called superdelegates — party hacks, elected officials and big Democratic donors — to reconsider earlier pre-primary pledges to back Clinton. If enough of those superdelegates were to follow calls to vote the way their states’ primary voters voted, it could tip the delegate balance to Sanders.

Meanwhile, if they do not do that, Philadelphia, the site of the July Democratic Convention beginning on July 25, could be a scene of chaos and mayhem reminiscent of the 1968 convention in Chicago, which featured riots both on the convention floor and in the streets of Chicago, as masses of peace activists and backers of anti-war candidate Eugene McCarthy protested the railroading of pro-war candidate Hubert Humphrey. A similar thing could easily develop in Philadelphia if Sanders backers feel that their candidate and they themselves are being robbed by party leaders of a victory they feel they’ve won.

Senate MInority Leader Harry Reid (D-NV), in a recent CNN interview, speculated that the selection of a Democratic presidential nominee could end up being the result of a “brokered convention” in which delegates end up shifting their allegiances, and negotiating with each other to reach a decision. That could be a sign that at least some party leaders are growing concerned about Clinton’s viability as a candidate in a general election, especially if it looks like the opposing party’s candidate ends up not being Donald Trump, but someone more “mainstream.”

Living just a few miles outside of Philadelphia, I’m looking forward to the Democratic Convention at this point. It doesn’t look like it’s going to be the Hillary Clinton coronation and love fest that the party’s neoliberal leaders and Clinton and her backers had been hoping for. Sanders campaign activists and his supporters should begin gearing up for the trek to Philadelphia, coming equipped with bandanas or tear-gas masks, and prepared for the security system which Convention

Convention Chair and former Pennsylvania Gov. Ed Rendell, a leading party fund-raiser and Clintonian stalwart, has told local media in town that he’s preparing security for the July convention, and has promised that the Philadelphia Police Department, which gained notoriety for the unconstitutional and often brutal way it (man)handled street protests during the 2000 Republican Convention that nominated George W. Bush, will be ready for whatever happens at this year’s Democratic one.

We’ll see. Sanders has been calling for a “political revolution.” We, and he, may get one in the city where it all started almost 240 years ago