Bellevue, WA — Yesterday marked the third annual Black Friday protests and strikes at Walmart, the largest private employer in this country. The Walton family, controlling owners of the company, is America’s richest family, with holdings valued at almost $150 billion dollars. For decades, Walmart has remained an employer powerhouse based upon a business model of low wages, poor benefits and union busting.

Walmart officials categorically deny any efforts to squelch workers’ organizing. At the protest at Bellevue, WA, yesterday, officials are quick to argue that the small percentage of employee participation in the strikes proves that the vast majority of workers are happy. When I asked their public relations representative to comment on the counter interpretation that limited employee participation could be due to an intimidating environment that scares would-be strikers into silence, she had no comment.

And though the spin-doctors of Walmart would have you believe that these protests and strikes are simply exaggerated demonstrations from a very vocal minority, the growing number of petitions, strikes, and studies say otherwise.

Walmart’s abuses are too numerous to catalog in their entirety. The most famously egregious includes a company-backed Walmart employee food drive during Thanksgiving last year for other Walmart workers living on Food Stamps and too poor to buy food for the holiday. In 2011, a class action lawsuit was filed alleging that women are paid, on average, $5,200 less per year than their already low-paid male counterparts. In 2005, Walmart shut down a profitable store in Quebec simply because it successfully unionized. In 2012, Walmart helped sabotage a safety improvement movement in their contracted overseas sweatshops, including a building that collapsed in Bangladesh and killed over 1,000 people.

It’s not just the Walmart workers who suffer. While folks might think that they’re saving money by shopping at Walmart, a 2013 a congressional report found otherwise. Walmart’s wages are so low that many of their employees require public assistance such as food stamps. The report calculated that a single “Walmart Supercenter” cost taxpayers anywhere from $904,542 to nearly $1.75 million dollars a year in taxpayer subsidies for employees. Another study estimated that that total annual cost to tax payers nationally was a staggering $6.2 billion dollars. And the kicker? Eighteen percent of the food stamp distributions are spent at Wal-Mart stores; that means that taxpayers essentially subsidized the $16 billion dollars in profits that Walmart made last year twice—once to subsidize wages, and once to subsidize the shoppers buying company products on sale in the stores. 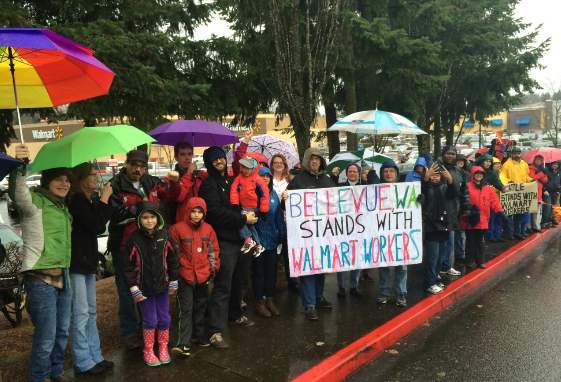 Walmart protesters in Bellevue, WA on Black Friday, part of a nationwide movement against the giant chain (photos by Stefan Moritz)

Based on numbers that Walmart itself released in a Goldman-Sachs presentation in September of 2013, Fortune magazine calculated that Wal-Mart could afford to increase wages by 50%. Demos, a non-profit research group, calculated that Wal-Mart could afford to pay every employee $14.89/hr without raising prices. That’s directly in line with the demand of $15/hr that protestors and workers are asking for, (but still not as much as paid by Walmart competitor Costco).

Walmart’s litany of injustices are enraging and frustrating, but it’s not that interesting. It’s simply another tale of the rich getting richer off the backs of the poor.

What is interesting is the new strategy for worker empowerment. The strategy of a few individuals striking and protesting one day a year is a complete departure from historical union strategy that has relied on en masse worker solidarity to directly threaten production.

Instead, this approach relies on the persistence of a brave few and their indirect impact. 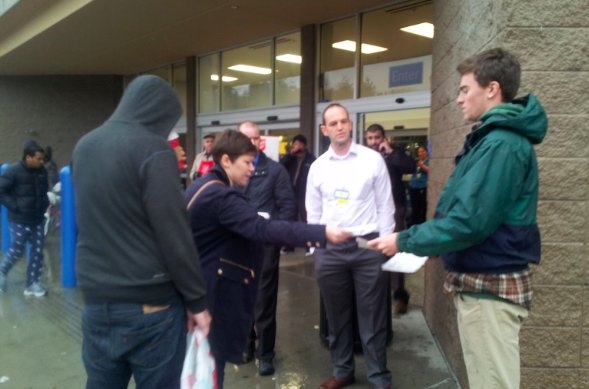 Leveraging worker power in an increasingly intricate and consolidated market is complicated. While the same threats of loss of income and retaliation in the workplace continue to exist to dissuade workers from standing up for their rights, now corporations are multi-site and multinational. Even if all 300 workers at one Walmart store were brave enough to go on strike and shut down operations, Walmart has hundreds of other sites to absorb that loss. They can hunker down and eat the loss in order to make a point to the rest of their 1.4 million employees that they are not to be challenged.

Old strategies in a new environment don’t work so here’s the new one:

By striking only one day a year, the economic burden that individual workers face is reduced. The fact is, strike funds and employee savings will always run out before the large coffers of Walmart. Battles of attrition are no longer practical. Targeting Black Friday, the most anticipated shopping day of the year, creates a continual media presence. This leverages the more complex pressure points of public opinion and consumer preference in a far more sustainable way. An annual strike also creates a continual presence among the employees, reminding them to not acclimate to injustice but to fight it. Each year that the strikes and protests continue is proof that standing up to Walmart can be done. It inspires others to join the movement. And finally, by targeting the largest retailer and employer in the country, any impact that is made sends ripples through the entire labor force.

However, the brilliance of the strategy is also its Achilles’ heel. While the number of people who pay attention to Black Friday is enormous, and it is also a day targeted towards luxury goods and indulgences. The best-case scenario would be that consumers have a moment of reflection and ethically prioritize the human rights of others over their desire for a cutthroat deal on a new TV.

But human psychology is complex and cognitive dissonance is distressing. While Walmart is, of course, a specific entity, it’s also representative of a larger problem that we Americans all prefer to ignore: we all want more stuff but can’t afford to have it all at its true cost.

Walmart’s labor abuses fall into the category of uncomfortable truths that in our heart of hearts we know but find too inconvenient to admit to ourselves. It’s much easier to assert that the reports of Walmart’s labor practices are controversial. If we tell ourselves that they haven’t been proven true yet, we can still go shopping, guilt free.

Walmart is a symptom of the synergistic chronic diseases of capitalism and consumerism that plague our society. They’ve been around for so long that we’ve convinced ourselves that they are not diseases, but simply a reasonable way of life. By admitting that Walmart is systemic problem, we come dangerously close to admitting that our enjoyment of the entire retail industry, the comforts of life that we expect, are only affordable because of the exploitation of others far enough down the supply chain that we can ignore them.

It takes a significant amount of insight to accept that what we think is a reasonable living standard in the US is actually opulent by world standards and even by standards of our own society. It takes even more strength to realize that if we are to live humanely, we cannot afford to keep all of our creature comforts; we must give some of them up. The amount of willpower needed to do that in an environment where nobody else is doing it is enormous.

However, all of that struggle pales in comparison to the immense amount of courage that it takes to be one of the Walmart workers who continues to go on strike every year. Risking one’s livelihood — one’s ability to feed, clothe, shelter and nurture yourself and your family — to fight an entity that has infinitely more power and resources — is more profound than words can express. It’s certainly braver than anything I have ever done in my life.

Jess Guh is a labor rights activist turned family practice physician. She lives in Seattle and wrote this article exclusively for ThisCantBeHappening!