There is a place in the United States, almost half-a-mile underground, in a salt mine, where radioactive waste leftover from the production of tens of thousands of nuclear bombs was to be held separate from all contact with humanity for 10,000 years, equivalent to the entire history of civilization. This separation of civilization from the byproduct of its folly had lasted one-tenth of one percent of that immense time when on Valentine’s Day, three years ago, an explosion sent the deadly contamination back to the world of humans.

It shouldn’t have been a surprise because there were already two other failed geological repositories for nuclear waste, both in Germany and designed for civilian not military waste, that have also leaked within a short time of operation. But despite the signs of potential failure the United States in an leap of technological faith spent billions to hollow out a salt cavern in south eastern New Mexico, near the small town of Carlsbad, not far from the Texas border called the Waste Isolation pilot Plant or WIPP. 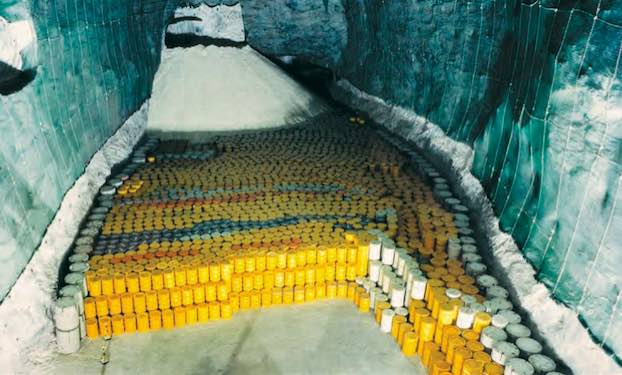 What happened on August 14, 2014 was that at least one of 683 barrels, about three feet tall and a little under two feet in diameter each and filled with plutonium contaminated waste burst into flames contaminating 8000 feet of tunnels and 22 workers who were either on the surface or arrived at the scene soon afterward.

The still unfinished clean up has cost taxpayers $2 billion since then.

Called transuranic or TRU by the industry the waste is the byproduct of 75 years of nuclear weapons production. In the case of the WIPP that waste had originated in New Mexico at the Los Alamos National Laboratory, one of the three places in the United States where nuclear weapons are designed and developed. TRU waste tends to be plutonium contaminated clothing, tools and test materials, the US has at least an Empire State Building full of the stuff, maybe twice that amount and it’s deadly to humans, a powerful carcinogen and a potential explosive, especially the chemicals that the usually soak the plutonium-contaminated waste.

The Los Alamos waste had been stored in barrels on the mesa near Santa Fe for about 15 years without problems until it was shipped to WIPP to be buried forever. As the barrels arrived at the remote desert location they were stored above ground and workers began the process of preparing the barrels for burial. Contained among the solid waste in the barrels was a liquid, mostly nitric acid, an extremely caustic chemical that’s used to tease plutonium out of uranium to make nuclear bombs.

Regulations forbid liquid waste from burial at WIPP so the idea was to pack the barrels with an absorbing material. One of the most absorbent is kitty litter.

Kitty litter itself is not explosive, in fact it’s a good absorbent. The problem was well known for decades: it’s not wise to put chemicals together that can have a chemical reaction and explosion.

What happened at WIPP on Valentine’s Day in 2014 has never been exactly clarified. What is known is that the kitty litter used was chemically incompatible. It absorbed the liquid but it also reacted with the chemicals in the barrel. All 683 barrels from Los Alamos shipped to WIPP and brought underground share this problem. A problem also shared by 100 barrels stranded on the surface by the accident. Those 100 barrels were shipped to a low level dump site in Texas called Waste Control Specialists. WCS had been owned by Harold Simmons a well connected Texas billionaire investor and GOP backer best known for funding the Swift Boat veterans group that opposed presidential candidate John Kerry in 2004.

Hancock insists that the regulations already on the books would be enough, but that nuclear weapons have often evaded oversight because of their strategic military role.

The problem lies in the long history of America’s nuclear weapons complex which was top secret during World War II and decades of cold war with the Soviet Union. Nuclear weapons production and the waste stream it produced was kept from public knowledge for decades. In Hanford along the Columbia river in Washington where plutonium for the bomb dropped on Nagasaki was made, waste was either released directly into the environment or later stored in now leaky and outmoded tanks.

After the last reactor was shut down the 585 square mile site was transformed into the largest nuclear waste dump in the western hemisphere and as a result two-thirds of the high level nuclear waste in the United States is now stored on the site about 200 miles southeast of Seattle.

With no real federal regulation the massive facility operated largely in secret until 1986. Through a series of lawsuits the state gained some control of the hazardous waste stored at Hanford but experts like Hancock say some officials are convinced that nuclear weapons sites should be independent of state oversight.

Tom Carpenter is the Executive Director of the Hanford Challenge, an organization that defends whistleblowers and works with unions working on Hanford’s projected century-long multi-billion dollar clean up. Bechtel Corp, runs the operation for the Department of Energy, a $30-billion per year cabinet-level organization responsible for the design, development and construction of nuclear weapons.

Despite the department’s title little of DOE’s work is related to energy production. Instead DOE hands off the finished weapons it builds to the Defense Department which has direct control of the bomb’s storage and use. The separate Nuclear Regulatory Commission oversees commercial and civilian owned nuclear reactors and isn’t related to national defense.

“Hanford,” Carpenter said, “is scheduled to send a lot of plutonium contaminated waste to the Waste Isolation Pilot Plant in New Mexico.”

Adding that close to 80,000 barrels of deadly Hanford waste are supposed to go to WIPP. That waste, containing plutonium mixed with a vast array of deadly chemicals is currently leaking into the ground water and eventually the Columbia River upstream of several large cities.

The waste from Hanford eventually has to go somewhere, but activists in New Mexico don’t want it there. However, John Valetta of the Carlsbad Chamber of Commerce thinks otherwise, he said after the reopening of WIPP that “we think its the next step in developing our nuclear corridor.” A series of nuclear related businesses that have been relocating to the deserts of New Mexico and Texas.

While activists fear these nuclear waste sites will permanently scar the land and environment wherever they’re built the residents in localities that want these sites are looking at the money they may bring to these relatively depressed areas. Don Hancock in New Mexico points to the ever increasing budget for the DOE under both Democrat and Republican administrations and President Obama’s proposal of a $1-trillion refurbishment of the National Nuclear Weapons Complex that’s run by the DOE.

Tom Carpenter of Hanford Challenge calls the clean-up there “an ATM in the desert” absorbing nearly $20 billion. Meanwhile the federal government recently pushed forward the date of the facility aimed to stabilize the 50 million gallons of liquid waste at Hanford to 2036. The projected completion date when the the facility was begun had been 2011.

Some local residents have said they believe that Hanford will never be cleaned and according to Carpenter the DOE could throw up its hands and declare the site a dump for nuclear waste from throughout the country.

Teacher and freelance writer PAUL DeRIENZO won a grant from the George Polk Awards to write about his father’s experiences as a nuclear engineer in the 1960s. He wrote this article exclusively for ThisCantBeHappening.net