Whether he ever said it or not, I’m going to borrow from a quote often attributed to Abraham Lincoln and alter it a bit to say: “American politicians must love war veterans — they keep making so many more of them.”

The ugly truth though, is that American politicians, and in fact the American public as a whole, don’t really give a damn about veterans. Sure, the politicians will go to the parades and wear their American Legion and Veterans of Foreign Wars hats (some even if they never really served in uniform or went to war), and sure ordinary Americans will applaud in the airport as a bunch of men and women in uniform walk by, but that’s about it.

When it comes to adequately funding health services and pensions for vets after they’ve put in their time, or paid a price in terms of lost limbs, disease or mental trauma, though, the government is always ducking responsibility and the public is whining for lower taxes, not calling for more money for veterans’ benefits.

My mom, a WWII Navy veteran who in 1944 selflessly answered the call for women to sign up so that more men would be freed up for combat duty, currently suffers from Alzheimer’s and other health problems. She has a modest pension from my late father’s job, and from his Social Security, but that’s all eaten up by the cost of her live-in companion and other health care assistance that is not covered by Medicare. We helped her apply for a veteran’s pension that could provide another up to $17,000, but were told it could take up to a year from the time of filing the rather simple paperwork before she’ll see a dollar. 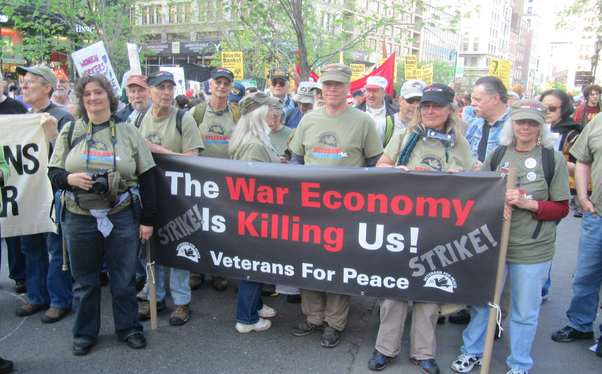 Vets for Peace join in support of the Occupy protests

From what I hear many vets simply die while waiting for the processing of a pension to which they are clearly entitled.

This is a disgusting way to treat veterans, and the only explanation I can think of for it is that the Feds just want to avoid paying out all that money. For that matter, I’ve met many veterans, and spouses of men who died of war-related wounds, who didn’t even know they were entitled to pensions. Why isn’t Congress requiring the VA to run TV ads like you see all the time for things like burial insurance or blood pressure medicine, only informing vets and their families about the VA benefits they’re entitled to? For years Congress actually barred the VA from doing TV advertising. Now it’s allowed, but you don’t see any ads anyway. There are plenty of ads urging kids to sign up for the military, but none telling vets about benefits they’re entitled to.

When we applied to have my mom’s Social Security switched from her own account to the much higher widow’s benefit after dad died, it took the SSA a month to make the change, and they backdated the payments to the date of his death. When we applied to the Connecticut State Controller’s office to have my dad’s pension shifted to my mother, who was entitled to half the amount they were getting when dad was alive, all they required was an original death certificate, and the change was effected within three weeks.

And yet the VA needs a year when we send them an original of Mom’s discharge papers proving her more than two years of honorable service during WWII, and an accounting of her current income, assets and deductible medical expenses? Bull!

I was just at an annual Memorial Day barbecue that my TCBH! colleague John Grant, a Vietnam War veteran and Veterans for Peace activist, and his peace activist wife Lou Ann Merkel throw regularly for their veteran and peace activist buddies. I was struck by the fact that this generation of vets (the baby boomer progeny of my mother’s generation), are all getting pretty long in the tooth. John just hit 65 and, while he’s pretty healthy, has filed for his Medicare. Another guy, a Vietnam vet, just fell down the stairs, and was in a full-length leg cast because he tore a knee ligament, while a third guy, who serve in the Merchant Marines during the war, is limping on two crutches thanks to as case of MS.

There is a huge wave of veterans from the Vietnam War that is about to crash down on the Veterans Administration, many needing major medical care and many eligible for VA pensions. Meanwhile, the permanent war campaign adopted in the Bush Cheney administration, and continued with reprehensible enthusiasm by the Obama administration, is grinding out injured and damaged vets at a prodigious rate — it is estimated that at least half of all current veterans suffer from some kind of trauma — mental or physical. And everything is made worse by the ongoing economic depression in the country that makes it hard if not impossible for returning vets — and for laid-off Vietnam-era vets — to find new jobs.

It’s a matter of basic decency that this nation and its citizens take care of those who — rightly or wrongly — went off to fight this country’s wars, justified or not. They should have first-rate timely health care, and they — and their eligible spouses, widows and young children — should quickly be approved for pension benefits if they are entitled to them.

Maybe if America honestly paid for the real post-war costs of its imperial adventures, instead of just pretending to honor its veterans with bands and parades while dodging the real costs of caring for them, we’d see an end to all the pointless and criminal wars, and maybe the number of our struggling and suffering injured veterans would finally start to subside–not because the old ones are dying off, but because we’re not stuffing more young ones into the pipeline.