The History Channel mini-series “Hatfields & McCoys” reminded me of Clint Eastwood’s “The Unforgiven.” Both productions showed a lot of violence in all its fascination while making it squalid, absurd, arbitrary and devastating to the victims and everyone around the victims. Both productions take as their theme men creating theaters of heroism for themselves out of their own hatred and sense of honor. Both productions show the theaters crumbling in the end as the violence becomes too stupid and meaningless even for the prime agents to continue.

“Hatfields & McCoys” also reminded me of football. You’ve got two well-defined teams who place group loyalty above all other values, even as they claim the ethics of Christianity, which does not place group loyalty above all other values. So there is no substantive moral difference between the Hatfields and McCoys any more than there is a substantive moral difference between the Minnesota Vikings and the Arizona Cardinals. The only reason to join or root for one side over the other is because it makes you feel good to be part of something bigger than yourself. That’s attractive, and indeed the series attracted huge numbers of viewers. “Hatfields & McCoys” is reported to be the second biggest non-sports event on basic cable ever with over 13 million viewers.

I myself sat through all three two-hour segments, even though that meant watching about 20 commercials for every sordid killing. It’s hard keeping your head in a 19th century family feud when somebody is touting car insurance or credit cards every eight minutes, just as it is hard to keep your head in the game when someone is touting car insurance or credit cards with every change of possession.

Does the United States make anything besides car insurance and credit cards?

What if Shakespeare was interrupted by a talking lizard every eight minutes?

The patriarch of the McCoys (Bill Paxton) looked to Christianity for justice and predictably descended into nihilistic alcoholism and madness, ultimately dying in a house fire of his own making. He seemed like a parable for the Tea Party. The patriarch of the Hatfields (Kevin Costner) looked to Christianity for forgiveness. He ended up a sadder but wiser old man in the tradition of Jimmy Carter and Al Gore who improved on morally substantive issues immediately upon leaving power. 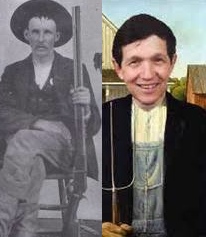 Law enforcement was biased, corrupt and subject to manipulation, then as now.

While the Hatfields and McCoys did hate each other, they were in complete agreement that violence was a great way to solve problems and therefore had everything in common, just like Democrats and Republicans. The guy who most annoyed both sides was Johnse Hatfield, who didn’t care much for the war. He preferred to sit out by his still in the woods, drink corn liquor and get involved with forbidden McCoy women. His father had to twist his arm to get him to fight. Both clans hated him more than they hated each other. He was the Dennis Kucinich of the story. If the New York Times was writing it, they would leave him out, because there was substantive moral difference between him and the two warring tribes.

That’s why historical fiction is important. You can acknowledge the existence of Dennis Kucinich if you disguise him and have him live 130 years ago.

The History Channel is an odd operation. Years ago, it showed documentaries about American history. Now its programming is mostly reality shows about people who sell priceless family heirlooms to a Las Vegas pawn shop so they can go gambling in the casinos. It’s oddly engaging to watch, but when you think about it afterwards, you want to kill yourself. The History Channel’s twin, H2, used to show documentaries about world history. It still shows documentaries but most of them are about the influence of space aliens on the ancient Egyptians, or the influence of Satan in politics.

Maybe as sequel, the History Channel could have a flying saucer land on the Kentucky/West Virginia border in 1880 and a bunch of space aliens from Occupy Earth could explain to the Hatfields and the McCoys that their true enemy is not each other but the coal mining companies. That’s something I’d sit through even if I had to watch a talking lizard sell me car insurance every eight minutes.