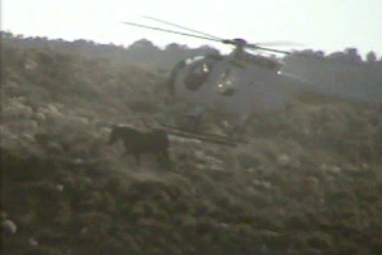 This appalling video shows what the Bureau of Land Management is really doing in its euphemistically-named “round-ups” of America’s wild horses.

As was reported in ThisCantBeHappening! earlier, the contractors hired by BLM to run horses off of public lands, so that those so-called “dual use” lands can be taken over by mining, timber or agribusiness-owned cattle interests, are not only destroying a part of the heritage of the American West, but are doing it with a cruelty that is both astonishing to behold, and also that is being hidden as much as possible from the public.

Laura Leigh, founder of the organization Wild Horse Education, who has been fighting to protect the wild horses, notes that contrary to the claims of the BLM, which has the responsibility for managing some 260 million acres of federal lands, federal law does not “force” the agency to “cull” these horses. Rather they are required to “manage” them. But through a duplicitous process reminiscent of how the “Indian problem” was “solved” during the 19th century, the agency has been shrinking the horses’ range areas, and then declaring them to be over-crowded, and then coming in and driving them out of their remaining land, often running the terrified animals until their hoves literally fall off. Many of the “round-ups,” as Leigh has written, are deliberately done during the foaling season, leading to many deaths among the young horses.

The “advocate community” is rightly concerned that wild herds are not managed under “multiple use,” but are managed at a non viable standard in an inhumane fashion. If an extraction company was forced to operate at the current capacity that our National Treasures are being managed, they would be forced out of business. Genetic bankruptcy is more than a concern, it is a stark reality that would ultimately lead to the extinction of wild horses in the West.

There is no “over population.” There is instead, competition for resources on public land.

If you give away a resource the horses rely on to an entity that operates in a subsidized fashion on public land, you have an “over population” of horses according to the agency. You have also created another avenue for public wealth to go into private pockets on the back of an already over-burdened American tax payer.

Fences create artificial migration routes. Water sources are fenced off and roads are being widened for the high-speed heavy truck traffic to accommodate expanding extractive interests. These extractive interests compete for water in arid western states. Their thirst for the scarce liquid is rising at an alarming rate.

The BLM determined that an “Appropriate Management Level” (AML) of horses for one Herd Management Area was sufficient at three animals. Why did they leave three? The BLM did not want their statistics to show another area “zeroed out” of wild horses.

If anyone wanted proof that these round-ups by the BLM, are needlessly sadistic, and hardly motivated by any concern for the horses’ welfare, this particular video, showing a helicopter tormenting an exhausted mustang, should do the trick.

Laura Leigh and Marilyn Wargo are activists and journalists who are exposing the deliberate abuse and killing of America’s wild horses by federal agencies like the BLM. Leigh, who is founder of the organization Wild Horse Education, has a lawsuit, supported by the Reporters Committee for Freedom of the Press, against the BLM, which has actively, and illegally, barred her from witnessing, on public lands, and reporting on its gruesome round-ups of wild horses.