There only was and only will be one Jimmy Breslin, and after his death last Sunday at 88, he is no more.

Funny, cranky and sometimes boorish, Breslin was a working class journalist who cared about the working class and the under and un-employed class and who, despite achieving wealth and pinnacles of journalistic success, from a Pulitzer and a Polk award to movie options and best-selling novels, never forgot his roots.

How many journalists have your read in a major newspaper or magazine, or heard bloviating on the air, young or old, who’ve had the courage and fortitude to do as Breslin did in his old age: finding a refrigerator box and setting himself up in the dead of winter on a heating grate on a New York City sidewalk alongside a bunch of other homeless people so he could write with real understanding about how they live? That was some column, and provided a jolting wake-up to New Yorkers who walk by those boxes every day, usually without a thought to who’s huddled inside them.

How many have had the courage to call out the likes of Hillary Clinton when she was a carpetbagger running for Senate from New York State, for having “blood on her hands” as she waved to the crowds?

How many have shared his outrage at learning how much money the Standard Oil Company paid to have a marketing company develop a new name and logo for the company, changing Esso to Exxon (that was one of the funniest of his columns I ever read, full of extraneous Xs whose value he placed at something like a million dollars per keystroke after learning what Exxon had paid a naming firm for its new corporate logo).

I’m pretty sure the answer to all these questions is the same: none.

Breslin did all that and much, much more. 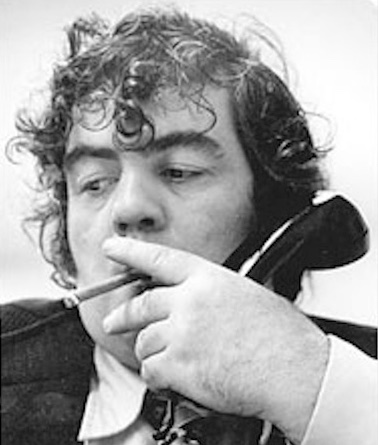 The problem is that there are no longer any newspapers whose publishers and senior editors are willing to run such gritty Establishment-demolishing and icon-attacking pieces in their columns and on their opinion pages.

Years ago, newspapers ran columns by the likes of Breslin, Anthony Lewis, Pete Hamill, Mike Royko, Molly Ivens and Joe Bageant — columns that could leave the reader fuming, racing for pen and paper or typewriter to knock off an angry letter to the paper or to a Congressperson, columns that would have you running to a friend or a spouse to read it aloud to them, columns that simply made you think about something or some people you hadn’t though of before. No more. It’s the rare column in a mainstream news outlet these days that can elicit outrage, make the blood boil, or even bring a tear to the eye.

Jimmy Breslin wrote those kinds of columns because he felt them, chased them down, and was able to write them, day in and day out, right through 2004, and even later, after a brief hiatus, into 2011/12, and he was able to do it because there were papers like the New York Post, the Daily News and Newsday, that let him do it.

Now newspapers are dumbed down, homogenized and busy seeking a higher-income, perhaps in the publishers’ minds more easily offended, or jaded, demographic, so they don’t want the old-style rabble-rousing columnists ruffling feathers and playing Charles Dickens.

Of course you can find those writers. They’re all over the internet. You’ll find them here at ThisCantBeHappening, at sites like Consortium News, Z Magazine, Counterpunch, NationofChange.org, and other sites. The problem is you have to go looking for them. The beauty of the old newspapers with their columnists like Jimmy Breslin was that everyone was confronted by a Breslin or a Royko or an Ivens when they opened their daily paper. Their columnists were in your face. You couldn’t avoid them. And it made huge a difference. Breslin busted up a corrupt Democratic Party machine with his column. Most newspapers require an investigative team and a series of page one articles to accomplish something like that. My late friend John Hess, managed, with some management push-back, to do the same kind of thing at the New York Times, and later as a columnist for a local TV station and on Democracy Now!, to the New York State horrendously corrupt nursing home industry.

It’s harder to do that type of writing when newspapers want to be safe, bland and “objective” on their opinion pages as well as their news pages, but that’s one of the prices of the consolidation of the news media.

I remember the day back in 1978 when I got the explanation from the managing editor at the Daily News in Los Angeles, where I headed the bureau covering Los Angeles County government for why an investigative story I had done hadn’t run. I had put together a piece showing how the Los Angeles County employee pension fund was invested in all of the same companies that at the time were the reason students were occupying state university administration buildings up and down the state. They were demanding that their schools’ endowment funds divest from the list of US companies being boycotted for supporting apartheid in South Africa. It was a powerful story because so many of the county’s employees were African American and supported that boycott, but didn’t know their own pension fund was violating it

I had initially been led to believe that my piece would be the front page banner story the next morning, but found it wasn’t even in the paper at all. This led to a series of efforts by the editor to change the tone of the piece, first of all from an enterprise report to one that attributed the story (falsely) to a county supervisor representing the largely black Watts area and South Los Angeles. When I complained about this, I was told that my articles were too “anti-business.”

I quit what became my last newspaper job, and began doing investigative pieces for a news program at KCET-TV, the local PBS affiliate.

For the last 20 years I’ve been living and working in the Philadelphia area. Over that time, I’ve submitted dozens of opinion pieces to the local paper, the Philadelphia Inquirer. If I remember right, two have been published over that period. I wouldn’t claim to be a Jimmy Breslin, but I know I write and report well. I also know that my submissions have been simply too much “out there” for the obsessively middle-of-the-road Inquirer to handle. Examples: A piece decrying the Pennsylvania Corrections Department’s ongoing and unconscionable refusal to provide proven treatments for a deadly Hep-C epidemic raging among the state’s incarcerated population, an article denouncing as a return to McCarthyism a list published initially in the Washington Post and then as a page-one story in the Inquirer labeling some 200 online US news sites as “purveyors of pro-Russian propaganda,” and an article saying that the establishment of a Pentagon drone-piloting station in suburban Horsham, outside Philadelphia, was, under the international laws of war, turning that community into a front-line war-zone and a legitimate target of those being targeted by drones.

I like to think these are the types of columns that Jimmy Breslin would have written had he been living down in Philadelphia, instead of in New York.

And I did get them published, but not in a mainstream newspaper. They ran on this site, ThisCantBeHappening!, and were picked up by many other online sites (some of them on that Washington Post/Inquirer hit list!).

I’m not sure what the answer is to the death of hard-hitting columnists like Breslin in the mainstream media. But let’s not attribute their absence to the dying off of such impassioned and dedicated journalists. It’s the smarmy publishers and senior editors of the putrified and increasingly irrelevant corporate media who are at fault for their obsessive focus on ratings and “hits” and eyeballs, and their loss of any commitment to hiring the best journalists and letting them go at it.

Jimmy Breslin was a force of nature. I’m not sure an editor could have stopped him from doing anything. They could suspend him, as Newsday did when he unleashed a racist and sexist tirade against a Korean-American colleague when she criticized something he’d written, but they couldn’t really fire him. He had too big a following in his native city. But I suspect if he were a young journalist today trying to get himself a column, Breslin would fare no better than the rest of us.