The desperate scramble of President Trump and Republican leaders in Congress to salvage a cure for their ailing health care proposal to replace Obamacare completely ignores correcting a deadly problem plaguing the very heart of America’s health care system.

The AHCA – the GOP’s American Health Care Act – does nothing to address HAI.

This is the deadly problem that causes nearly 100,000 deaths per year across America.

HAI is healthcare-associated infections. These are infections people get while in the hospital receiving treatment.

CDC data released last year stated that HAI impacts over 700,000 annually. “When people go to the hospital, they should not contract a preventable healthcare associated infection,” noted a CDC publication. 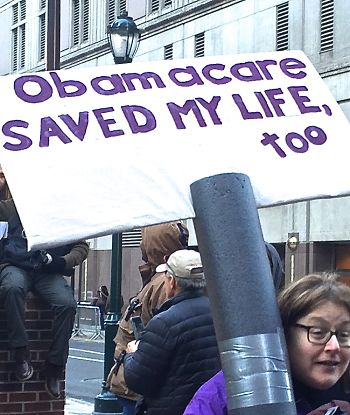 But Americans do contract serious infections while hospitalized and the heavily criticized AHCA, pushed by Trump and House Majority Leader Paul Ryan, omits addressing the HAI scourge that strikes Americans at alarming rates.

Incredibly with all the GOP squeals about soaring health insurance costs, the unaddressed HAI drains an estimated $20-billion in healthcare costs annually, according to the federal Center for Disease Control.

The rancor swirling around health care reform across America overshadows the scandalous inability of this nation’s political and business leaders to address serious problems infecting core health care system pillars – problems that are generally preventable and problems that if eliminated would save billions of dollars.

The Trump/GOP advanced AHCA, for example, does not launch a concerted attack on medical errors.

Errors in medical treatment cause more than 250,000 deaths per year according to a study released in October 2016 by a team of patient safety experts at the prestigious Johns Hopkins University School of Medicine. That study discovered that medical errors now rank as the third leading cause of death in America.

Diabetes is one of America’s ten most deadly diseases, causing over one million deaths annually. Almost ten percent of the entire U.S. population has some form of diabetes. Diabetes impacts around 13 percent of both Hispanics and blacks.
And this disease costs the American economy a staggering $245-billion annually according to an assessment released a few years ago.

Medical experts note the most common form of diabetes – Type 2 – arises from poor diet, lack of exercise and carrying too much weigh. Thus, key causes of Type 2 diabetes are preventable, producing decreases in suffering and painfully high health care costs. Yet, the GOP’s AHCA does nothing to prioritize prevention related to diabetes.

President Trump has criticized the high costs of prescription drugs. Yet this big problem receives little attention in the AHCA.

While Trump now threatens to oppose the reelection of Republican members of Congress who do not support passage of the AHCA he has not taken a tough-guy stance on Big Pharma demanding sharp reductions in drug prices.

The most effective Hep C drug costs over $90,000 per treatment in the United States while the same treatment costs $1,200 in Egypt and $900 in India.

A stark indicator of the poor performance of America’s high-cost health care system is the chilling reality that America has the lowest life expectancy of thirteen high-income countries such as France and Britain.

For too many Americans, the health care system in their First World nation – a system that brims with extraordinary medical advances for those who can afford it or have the right insurance coverage -– has a Third World aspect to it because high costs for treatment block access to that needed care for too many, particularly middle-income Americans who bear a disproportionate brunt of America’s high cost health system.

Health care costs in America are so high that over a third of all Americans do not seek a doctor’s help when sick and do not fill prescriptions as prescribed, according to a report released in October 2015 by the Commonwealth Fund.

High medical care costs are also the cause of over half of the personal bankruptcies in America. Worse yet, most persons bankrupted had medical insurance — insurance that just didn’t pay enough of the costs of care. A January 2016 item on the American Journal of Medicine blog noted how medical bankruptcies continue “even under” the federal Affordable Care Act, commonly known as Obamacare.

Health care cost related personal bankruptcies will continue under the Trump/Ryan AHCA…with a prognosis that this bankruptcy problem will worsen.

America’s political leaders need to treat the causes of what makes the U.S. health care system sick instead of enacting measures like the AHCA that prevent real cure.

Ramming the AHCA through Congress despite it containing crippling realities like millions loosing current health coverage and costs soaring for the elderly on fixed incomes is a bitter pill to swallow…particularly for low-income Trump supporters surgically targeted for shortchanging by the AHCA that heaps huge tax breaks on the wealthy.