The argument is that if Americans are told they can no longer drive gas-guzzling automobiles and blast their air conditioners at will, or if the US financial system again collapses as it did in 2008 leading to the Great Recession, the people of this country will essentially go mad and a lawless chaos of dog-eat-dog, kill thy neighbor for his food, will ensue.

“It will be like the Great Depression all over,” I read in one account of a recent report by one JP Morgan Chase analyst who is predicting a dramatic market crash of over 40% followed by armageddon. (I learned about this little report of impending disaster from a former cop friend who advised me to get a gun and plenty of ammo and to stock up on food to be able to protect my family.)

But this is truly ignorance regarding what actually happened when everything did collapse back in the Great Depression and Dust Bowl. 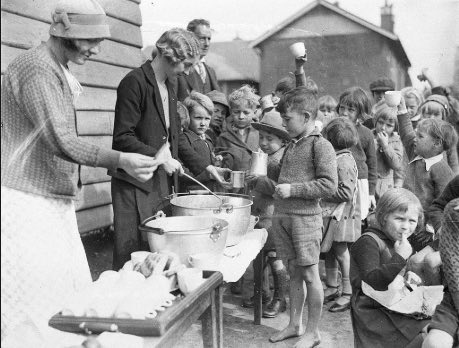 Feeding hungry kids during the Great Depression
It’s true that a few despondent investors did leap from windows of tall buildings in lower Manhattan after the 1929 stock market collapse, but not all that many, and things continued fairly calmly after that as the economy began to seize up. After all, very few Americans were actually invested in the market. But even as the lay-offs, bank collapses, bankruptcies and home foreclosures began to mount, there was no revolution in the US.

My own father, then just a young kid, recalls his family losing their home in Flushing, NY as his father, a carpet jobber, lost so many customers he had to give it up, unable to make the mortgage payments. He didn’t pick up a gun and go on a rampage, or join others in his situation and storm Washington. He just started looking for odd jobs to support his wife and two kids, and voted for Franklin D. Roosevelt in the next presidential election in 1932 and the other three after that.

The Great Depression, when unemployment soared to 25% of the workforce by 1933, remaining above 15% as late as 1940, far past any level it has hit since that time, even in the recent Great Recession, which of course was also much shorter. But even in the depths of that monstrous economic collapse in the 1930s, the American public didn’t turn on each other. In fact, quite the opposite, it was an era of sharing of what people had, and of collective action for change — especially in the field of labor union organizing. The Socialist Party also saw it’s biggest surge of support (the Communist Party, too), as workers saw the need to band together to defend themselves against a capitalist class that was viewed as predatory and criminal.

Why would otherwise rational people think that Americans today would behave any differently in a national economic crisis, or climate crisis? Are the bonds among us as a people that much more frayed today than they were back in the 30s when there was, I should point out, legal segregation of the races in most of the country and de facto segregation in the rest of it, and when a mass migration of desperate small farmers, white and non-white, from the Southeast to the urban North, and from the drought-stricken central plains to the West Coast (a good example of climate disaster response)?

John Steinbeck wrote graphically of the violence that greeted some of those climate refugees from Oklahoma, Arkansas and West Texas when they got to California, but he also wrote of the solidarity of those Okies, Arkies and Texans as they fought for their right as Americans to move where they wanted and to get paid fair wages for their work on the giant farms. 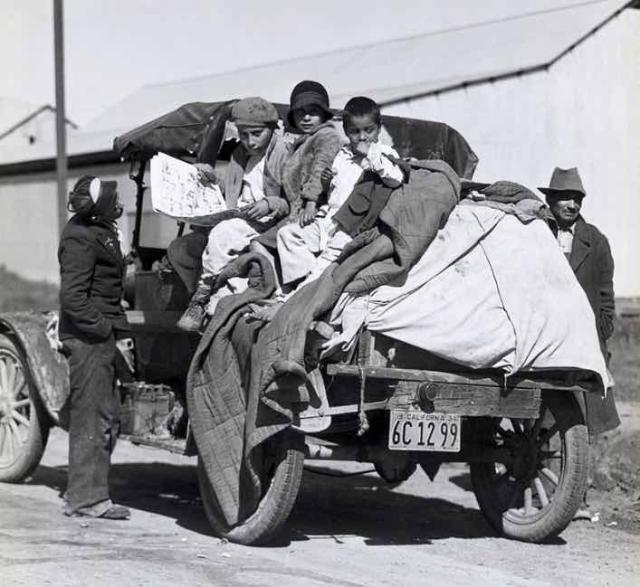 Dust Bowl migrants in California during the Great Depression
Whether or not we are about to face another economic disaster, perhaps one worse than any we’ve experienced before, and when (not whether) we have to face an inevitable climate crisis, with massive droughts hitting the nation’s grain belt and salad bowl regions in the West, Southeast and Midwest while the Northeast faces epic summer flooding and winter blizzards, I feel confident that the response of most Americans will be, not a turn to guns and mayhem in a scramble of the survival of the fittest, but rather a turn to communal support and a return to collective political action. 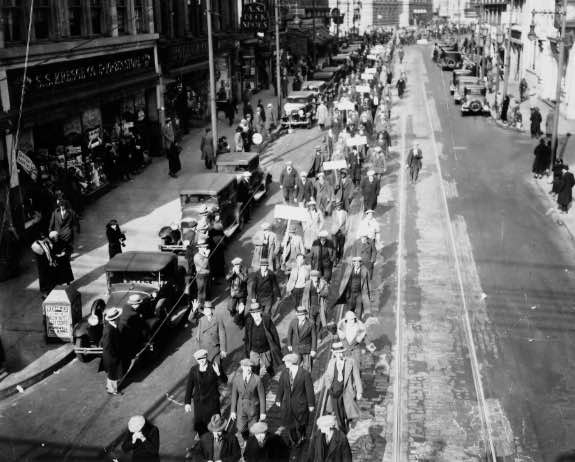 Workers organize and march for jobs in Camden, NJ during the depths of the Great Depression
It’s what we as a people have always done in the past. I see no reason to doubt that we won’t do the same thing when disaster strikes this time. The courageous people of Puerto Rico, who have been enduring both an epic economic disaster, and a horrific climate disaster that is still continuing as new hurricans draw a bead on the destroyed island colony of the US, are a good example of how this can work. Far from attacking each other, they are working together as a people to rebuild and to survive, and because they are an ignored and abused colony of the US, they are doing it with far fewer resources and under oppressive economic constraints, than we on here on the mainland will be confronting.

Maybe that’s what the people in power on Wall Street and in Washington are afraid of. After all, the ruling class knows how to handle chaos. They just send in their militarized cops and their National Guard troops with their automatic weapons, tear gas and armored vehicles. But they don’t know how to handle an organized collective action by hundreds of thousands or millions of people working together. The sooner we all realize that and start organizing to achieve it, the more likely our chances to achieve that goal.

Maybe it’s too late to avoid another crash, as first Democrats and now Republicans in Washington keep cutting back on bank regulations imposed after the Fiscal Crash, inviting another collapse, and perhaps, thanks to the inaction of the Obama years and the outright assault on the earth’s climate system by the current Trump administration and Republican Congress in Washington, it’s too late to avoid catastrophic global warming. But it’s not too late to begin building a new politics designed to allow us as a people to respond to these crises in a constructive way that helps us all survive rather than in a way that ends up having us killing and stealing from each other like animals in a jungle while the rich sit it out in their walled-in, heavily guarded communities.

Americans Need a Say in How Far the US is Going to Go in Backing Ukraine!
Russian president Vladimir Putin is playing a dangerous game by making threats to use ‘small’ so-called theater nuclear weapons with explosive power this fraction of the power of the…
All Dave LIndorff's Posts