Bernie Sanders remains behind Hillary Clinton in the number of pledged delegates he has amassed over the course of just under two and a half months of primaries and caucuses. But her advantage in pledged delegates has fallen over the last month and a half from a high point of well over 300 to a current 213. (His actual gap may even be below 200 now, because or a miscount belatedly acknowledged by the Colorado Democratic Party there, and because while Washington state’s delegates have not yet all been allocated following the initial caucus, it is clear that the majority of unallocated ones will end up going to Sanders based on the initial caucus results.)

As Sanders’ campaign has repeatedly said, he has a reasonable chance of closing that gap and winning a majority of the pledged delegates.

Many critics — including people who aren’t even Sanders’ supporters — have denounced the devious and biased way major media outlets, including the New York Times, the Washington Post and most of the major television networks, have followed the Clinton campaign’s lead in including so-called Superdelegates in the totals (Clinton has over 400 of these unelected delegates, whose positions are allocated to the various states and other primary jurisdictions, and who are mostly elected officials, party officials and lobbyists supportive of the Democratic Party leadership, and Sanders has just 38). This distorted count has been used for months now to insist, falsely, that Clinton “has a lock” on the nomination. But this has always been deceptive counting, because those delegates, while claimed by Clinton and to a far lesser lesser extent Sanders, are not pledged at all but are free to change their minds.

They might, for instance, do that if they felt that Clinton was unelectable (a not unreasonable assumption, particularly if between now and the July convention she were to be indicted by the US Justice Department for violating federal law in keeping her emails as Secretary of State on a private hackable server).

But the big issue not discussed at all is that all of Clinton’s margin of pledged delegates were picked up by her in a string of early primaries in the deep South states, just as planned in “reforms” of the primary process made by the neo-liberal DNC leadership in the years following the near success of insurgent peace candidate Eugene McCarthy in 1968 and the successful nomination of insurgent anti-war candidate Sen. George McGovern four years later in 1972. McGovern’s successful march through the primaries terrified establishment Democrats, and so, by the 1990s, Super Tuesday in the South had been established, followed by a move of several other southern states including Texas to earlier dates. The idea was that the more conservative southern Democrats would not support any radical candidates outside of the mainstream, and that by killing such candidacies off early in the South, they would end up starved of funding and would see their campaigns wither away.

The strategy worked marvelously in prior years and this year for Clinton. Remember, in late February and early March Sanders was largely unknown outside of New England. The Democratic party is marginalized in the by now uniformly Republican-run Deep South, and black voters are disproportionately its backers — people who understandably view it as critical to their survival to keep Republicans from also controlling the federal government. And even among those few black voters who knew of Sanders and of his strong history of Civil Rights Movement activism and of his consistent support for minority issues and for the nation’s poor as a member of Congress, he was deemed at primary time to be a long shot to win in any general election. Clinton was thus the overwhelming victor in those early primaries, particularly among black voters. In fact, just between Feb. 27 (South Carolina) and March 8 (Mississippi), she picked up 378 more delegates than Sanders, largely because of the fiction promoted by her campaign and touted in the corporate media that she would be “more electable” than Sanders in the general election. 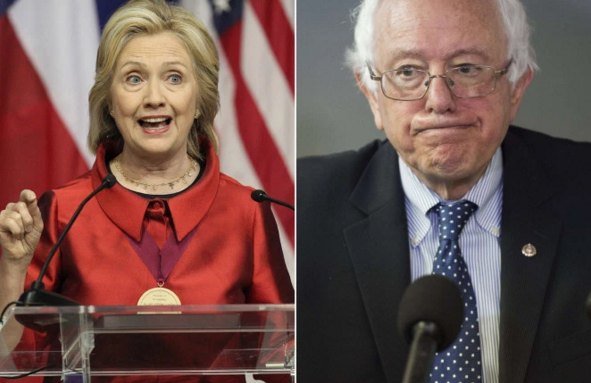 Get that? 378 extra delegates in just over a week early in the primary season, and Clinton has been riding on that cushion ever since, though it has already shrunk by almost half as Sanders has won primary after primary since then.

It may be that the strategy of front-loading states in the deep south (South Carolina, Alabama, Georgia, Louisiana, Texas and Mississippi) will work to deny Sanders a majority of pledged delegates going into the Democratic Convention in Philadelphia this July, but that overlooks the unexpected reality that his popularity among Democratic and independent voters has continued to surge dramatically over the intervening months, while Clinton’s has plummeted. In the latest polls, Sanders has emerged as the most popular candidate not just among Democrats, but among all registered voters, with the highest positive ratings and the lowest negative ratings. Clinton meanwhile, has higher negative approval than positive, putting her close to Trump and Cruz in terms of popularity.

Certainly the Superdelegates, if they want the Democrats to win the election this November, and to have a shot at winning back at least the Senate, need to consider that reality. Imagine if California, with its 475 pledged delegate total, were to go for Sanders on June 7, scarcely a month before the Convention, and then Clinton were to win the nomination? It would spell disaster! What if Sanders were to win the pledged delegates oveall, but Superdelegate votes were to hand her the nomination. Even worse disaster!

Remember that the states that have handed Hillary Clinton her continuing if shrinking pledged delegate lead are all Red states that have no chance of voting Democratic this year, or of contributing a single electoral vote to the Electoral College tally at the end of the day. The idea that those states’ primaries could determine the Democratic Party’s presidential candidate is simply outrageous, totally undemocratic, and also suicidal.

At the least this should be a part of the discussion in any reporting on the Democratic race for the nomination. So far it’s a topic that is deemed not fit for public discourse in the national corporate media.