US news reports on an incident Tuesday in which two Russian jet fighters buzzed very close to a US destroyer, the USS Donald Cook, in the Baltic Sea, make it sound like a serious threat in which the US might have been justified in defending itself against a simulated attack on the high seas.

Nowhere in the reports in the US was it mentioned that the Cook was itself engaging in provocative behavior.

The Baltic Sea is an international waterway, bordering the countries of Denmark, Germany, Poland, Russia, Latvia, Estonia, Lithuania, Finland and Sweden, and as such, if the US wants to sail a military ship there, it has every right to do so. But honest reporting on this incident should have included that the Cook wasn’t just sailing around innocently in the open waters of the Baltic. It had moved to within a 70-mile radius of the Russian port enclave of Kaliningrad — an isolated and thus sensitive part of Russian territory located on the Baltic coast that is bounded by Lithuania and Poland and thus is separated from the rest of Russia. Kaliningrad is the site of a major Russian naval base, and is also home to 500,000 Russian people.

Here’s a map of Kaliningrad showing the 70-mile radius within which the USS Cook had positioned itself at the time of the multiple flybys by two Russian Su-24s (and where it was engaging in landing and takeoff exercises with Polish military helicopters. 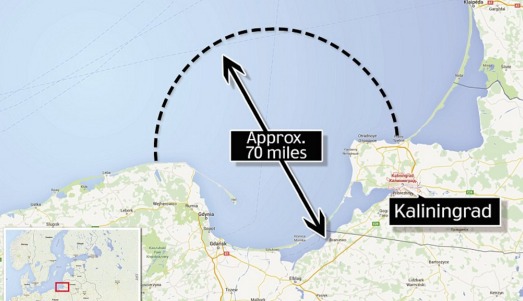 The US reporting on this whole incident has been hysterical.

CNN’s Pentagon reporter said the jets were “demonstrating a simulated strafing run” and implied that it was dangerous because “if it had been a real strafing run, we wouldn’t have known it until it was too late.” Of course, Russia and the US are not at war, so why would Russia have strafed a US destroyer? The reporter didn’t say. Instead, he said the ship’s commander deserved “kudos” for keeping his cool and not loosing the ships anti-aircraft defenses on the two jets.

The Russian jets, it should be noted (but wasn’t in this report until late in the piece), were not armed, with no missiles mounted on the wings. The Cook, on the other hand, is armed not only with deadly defensive anti-aircraft weapons, but also with offensive (and potentially nuclear-tipped) Tomahawk cruise missiles, making its maneuvers in and around the Russian base and Russian territory anything but innocent.

Other US news reports were similarly breathless and one-sidedly jingoistic in their reporting about the encounter.

In fact, there was nothing dangerous about the incident at all except if the US ship’s crew had been foolish enough to respond to the harassment by shooting down the planes. (in truth, nobody on the US vessel seems to have been particularly anxious about the Russian jets zipping by them, judging from videos taken by the crew.)

A fairer reporting job might have speculated as to how US forces would have responded, had a Russian cruise-missile-armed frigate or destroyer approached within 70 miles of naval bases at Newport News, Virginia, or San Diego, or perhaps the Pensacoula Naval Air Station on the coast of Florida just east of Mobile in the Gulf of Mexico. (See map below, to understand to how near the USS Cook was to Kaliningrad when it was buzzed.) 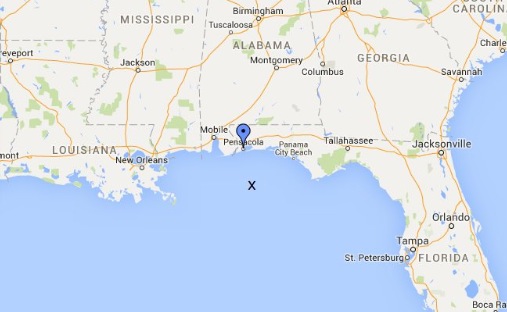 Under international maritime laws, a country can claim the waters within 12 miles of its coast to be “territorial waters,” and can exclude foreign ships within that distance, but when it comes to military bases, and countries that a country views as potentially rivals, such as the US and Russia or China, ships further off from a base are liable to be surveilled and maybe even harassed if they approach. I’m guessing if a Russian warship were to get within 70 miles of a US Naval installation, it would, like the USS Cook, find itself being buzzed by US Navy attack planes, or visited by US Coast Guard vessels–especially if it were known to be armed with long-range potentially nuclear-tipped cruise missiles!

And remember, while US government officials keep referring to Russian “aggression” (falsely claiming, for example, the the Russian Army “invaded” Ukraine and especially the erstwhile Ukrainian territory of Crimea (later annexed following a local plebicite), it has actually been the US that has been taking a very aggressive stance towards Russia. This has been true ever since the US backed a coup in Ukraine, which ousted the elected pro-Russian leader of that country and installed a fascist anti-Russian government their that then launched a war against the Russian minority in Eastern Ukraine. The US lately has been moving offensive weaponry into Poland, Estonia and other countries bordering Russia in what can only be seen as threatening moves, while leading an embargo against Russia –itself an act of economic warfare.

It is in light of these aggressive US moves that the USS Cook’s incursion near Kaliningrad has to be seen, and also the Russian aerial response to it.

But that kind of fair and balanced reporting is absolutely absent from US corporate media reports on this incident, which instead simply parrot the Pentagon and State Department line and present it all as an example of Russian “brinksmanship.”

By the way, I think it’s safe to assume that this kind of dangerous brinksmanship — dispatching of a nuclear-armed, or potentially nuclear-armed ship up close to Russia’s borders to play chicken with the Russian Navy and Air Force — is not something we’d see if Bernie Sanders were president, but it is something we can expect if his neocon opponent Hillary Clinton, or any Republican candidate (with the possible exception of Donald Trump), were to replace President Obama.