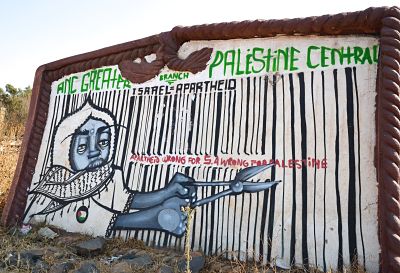 Protest art in the Orange Farm settlement of South Africa circa 2014. LBWPhoto

Actions by Trump and Smuts, while separated by several decades, prompt many people in America and South Africa respectively to use the same word to describe each leader: racist.

And, Trump, like Smuts, has acted decisively on behalf of Israel.

The actions of Smuts and other white supremacist leaders in South Africa over a century ago triggered the creation of the African National Congress (ANC) in 1912, three years after the formation of the NAACP in America. A long-time leader of the ANC was Nelson Mandela, the legendary activist/statesman.

Recently President Trump smashed decades of American policy with his declaration that recognized Jerusalem as Israel’s capital. In the early 20th Century Jan Smuts played a pivotal role in laying the foundation for the creation of Israel.

Trump’s declaration on Jerusalem received applause in Israel by top governmental officials and citizens alike. Trump received Israeli accolades despite the fact that a few months ago Trump publicly praised Israel hating Neo-Nazis after that rampage by racists in Charlottesville, Virginia.

Trump proclaimed his declaration was “the right thing to do” irrespective of the fact that it flouts international law that has opposed Israeli occupation of Jerusalem since 1967. Trump said his declaration was simply a “recognition of reality.” Trump critics point out the ‘reality’ of Israel’s control of Jerusalem is tied to decades of the U.S. providing Israel with military aid, financial support and diplomatic backing that strengthened Israel’s occupation of Jerusalem and the West Bank.

The hands of South African Jan Smuts, were behind the Balfour Declaration, the November 1917 document issued by the British government that cemented British backing for the creation of a “national home for the Jewish people” in Palestine.

Israel was formally established in 1948, two years before the death of Smuts. Israel was established on land referenced in the Balfour Declaration as Palestine. British governments never fully enforced a provision of the Balfour Declaration that stated, “nothing shall be done which may prejudice the civil and religious rights of existing non-Jewish communities in Palestine…”

Before, during and after the time when Smuts worked with then British Foreign Secretary Arthur Balfour to set in motion a homeland for the Jewish people, Smuts worked to obliterate the homeland rights of South Africa’s black majority. 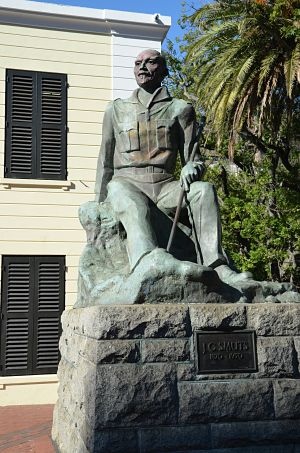 South Africa’s 1913 Land Act, for example, forced blacks to live in reserves that occupied just 8.7 percent of that nation’s land. Smuts backed the 1913 Act that confiscated land owned by black Africans and barred blacks from buying land in their homeland. Solomon Plaatje, a founding ANC member wrote upon implementation of the Land Act “…the South African native found himself not actually a slave, but a pariah in the land of his birth.”

Many critics worldwide of Trump’s declaration on Jerusalem claim it will aggravate the apartheid-like existence of Palestinians in Israel, the Gaza Strip and on the occupied West Bank where Jerusalem is located. Some critics, for example, liken Israeli government restrictions on the movement of Palestinians in the West Bank and Jerusalem as similar to the movement restrictions apartheid once imposed on blacks in South Africa.

Israeli government settlements on the West Bank, that violate international law and UN Security Council resolutions, have pushed Palestinians into reserve like enclaves.

Days before Trump’s Jerusalem declaration an action related to Israel’s settlements was referenced in court documents for the guilty plea entered by Trump’s former National Security Advisor Michael Flynn regarding lying to the FBI.

Reports on those Flynn plea documents state that Trump’s son-in-law and close advisor, Jared Kushner, ordered Flynn to lobby Russia’s ambassador and other ambassadors to block passage of another UN resolution condemning the growth of Israel’s illegal settlements. The U.N. Security Council approved that resolution.

In November 2017 Trump Administration officials threatened to close the Palestinian consulate in Washington, DC. This threat was based variously on Trump claims that Palestinians needed to get ‘serious’ on peace talks with Israel and his administration’s objections to Palestinian plans to ask the International Criminal Court to investigate human rights violations by Israel in the occupied territories.

Trump’s declaration on Jerusalem commits the U.S. to spend hundreds of millions of dollars to erect a new embassy in that city to replace the current U.S. embassy in Tel Aviv.

The same President Trump who is ready to expend massive federal funds for a new U.S. embassy in Jerusalem has proposed gutting federal funding to improve housing and dilapidated communities for America’s poor.

Jan Smuts, unlike Trump, is little known today outside of South Africa.

Interestingly, in South Africa, there is a movement to remove statues of Smuts and other prominent proponents of apartheid similar to movements in America for the removal of Confederate statues. Trump is a vocal opponent of removing Confederate statues/monuments.

A statue of Smuts is one of the 11 statues on the square across from the Parliament building in London. Famed former British Prime Minister Winston Churchill pushed for that Smuts statue. There is a statue of Churchill in that square and statues of two of South Africa’s most famous equal rights activists: Nelson Mandela and Mahatma Gandhi. 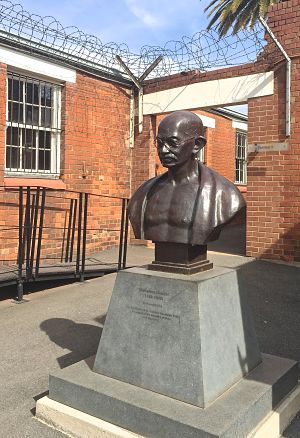 Gandhi lived for a while in South Africa where he worked as a lawyer before his return to India in 1914. While in South Africa Gandhi fought for better treatment of that country’s South Asian population. That activism led to Gandhi’s incarceration in the same Old Fort prison in Johannesburg that later held Mandela.

Jan Smuts opposed Gandhi’s equal rights activism and the equal rights efforts of the ANC that Mandela would lead.