Okay, somebody has to say this, so it might as well be me.

The American political system exists as it is because of two reasons:

1. The majority of Republican voters are either incredibly ignorant or are simply incredibly selfish, and

2. The majority of Democratic voters are so blinded by their fear of Republicans that they will vote for the most puerile, manipulative, deceitful, greedy and/or feckless candidates, as long as they are Democrats, and will re-elect them even after having been betrayed by them time and time again.

There, I’ve said it.

Reason number one is why we currently have Donald Trump for president. The man cannot hold a train of thought for the ten or 15 seconds it takes to express it or to type it into a Tweet, lies so often I don’t think he even knows when he’s doing it half the time, and has no moral core. And yet a solid third or more of American voters think he’s just great. And even though all his policies are damaging the very people — the poor, forgotten white working class — that he likes to highlight as being his main concern, those people, who are now at risk of losing their subsidized health insurance available under Obamacare, their Medicaid, their Supplemental Security Income checks (available to the disabled and to children and young single parents left in need by the death of a working parent/spouse) and the protection against predatory lenders afforded by the Consumer Financial Protection Bureau (CFPB), continue to back him, and will likely vote for him in 2020.

Reason number two is why, despite proof that the Democratic Party leadership and its pre-annointed 2016 presidential candidate preference Hillary Clinton, worked hand-in-glove to steal the nomination from Vermont independent Sen. Bernie Sanders and his tens of millions of supporters last year, and despite the knowledge that that same corrupt leadership is hard at work now blocking progressive efforts to democratize the next Democratic primary, and to run real progressives as candidates for House and Senate in 2018 instead of more of the same corporatist hacks, Democratic voters will submissively cave in as always and vote for those same lackluster and corrupted corporatists, either handing wins to Republican opponents, or electing/re-electing ineffective, self-aggrandizing hacks. 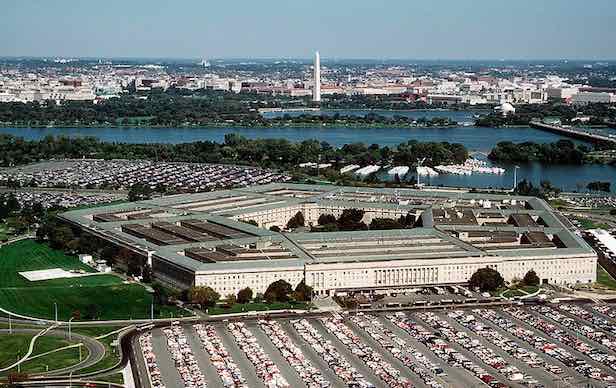 The Pentagon, world's largest office building, surrounded by parking lots for the warmakers

There are other problems too, of course. To a certain extent, both Republican and Democratic voters in the US are blinded to reality. In the case of Republicans, who tend to be less well educated, or even if they have higher degrees, to be in thrall to fanatic religious doctrines that over-ride any scientific thinking they might once have learned, this blindness to reality is celebrated. Among Democrats, who fancy themselves to be the “reality-based” voters, however, there is also a blindness to reality. Democrats refuse to see the larger picture: for example that the US is absurdly over-militarized and badly in need of being pacified and disarmed. No amount of calls for better funding for social needs can succeed without first closing down the over 800 bases that the US operates abroad, terminating all the undeclared foreign wars and military adventures in places like Syria, Pakistan, Iraq, Afghanistan, Somalia, etc., shrinking the Army, Navy, Air Force, Marines and Special Forces and the nuclear forces and slashing the overall military budget by at least 75%. To fail to recognize this reality is as stupid as your typical Republican yahoo’s refusal to accept the reality of rampaging climate change. It is simply Democratic yahooism.

A Republican can visit the lower stretch of Miami Beach’s Alton Road — the main concourse of the city — at high tide and watch the sea surge up through the storm drains. Even if this leaves the observer standing in calf-deep seawater that wasn’t there a few years ago, he or she will insist that climate change is a “liberal hoax.” Laughable? Sure, but no more so than some liberal Democrat standing a mile or so back from the Pentagon — the world’s largest office building! — and, while taking in the view of its vast parking lots holding the cars of some of its 23,000 employees, denying that the US military is a bloated monstrosity in need of epic downsizing.

These two particular blindnesses — the one a Republican and the other a Democrat affliction — get to the heart of our national political disaster. Unless both are overcome, or at least the Democratic one, nothing of real consequence can be done to escape the mind-numbing political morass into which this nation has sunk.

It is both fascinating and inspiring to watch the explosive movement of women suddenly coming out of their isolation to decry and condemn the horrors they have suffered over their lifetimes at the hands of sexist and often criminally abusive men in positions of power. I wonder what it would take to ignite that same degree of passion and heroic insurgency over the continued political inaction on climate change and over the nation’s continued war-mongering and imperial foreign policy actions. (Trump signing a record $700 billion military funding bill this week doesn’t seem to be doing it.)

Sadly, the dynamics are quite different. While abuse of women by men in power is ubiquitous, it is experienced in a very personal way, which means that while the victims may bury it or try to ignore it, once some of them start to say “Enough!” and go public with their anger, the awakening can snowball. But with climate change and military spending, there is not that clear sense of personal grievance. Parents in a Philadelphia family who are forced to send their children to an underfunded, overcrowded, run-down school that leaks when it rains, has too few desks for its bulging classrooms full of kids, and not enough books to go around may be angry, but they are unlikely to see their children’s plight as the fault of a military budget that they rarely if ever even hear about, much less see with their own eyes. Likewise, most people who don’t read scientific articles about what’s happening with the earth’s climate probably think it’s nice that winter is coming later in the season lately, and that the flowers and leaves are coming out earlier where they live than in years past. They don’t see the looming existential disaster for mankind.

Both our political parties, and the bulk of our mass media, play right into this problem. Republicans outright shut down discussion of and information about climate change, as Florida’s Republican Gov. Rick Scott has done by banning the use of the terms global warming and climate change by the state’s environmental and land-use planning agencies, and as the Trump administration has attempted to do by dismantling and undermining the Department of Interior and Environmental Protection Agency, as well as ending satellite and other federal research programs aimed at monitoring the pace of climate change. Meanwhile, Democrats refuse to discuss cuts in military spending, with even Sen. Sanders backing the F-35, that costliest boondoggle in the history of war, because the Pentagon promises to base some in his state of Vermont. Yet with a budget of $1.5 trillion and rising, that plane, which at a current $100 million a pop has no real-world combat application (even if it could do what it was supposed to do which it cannot), if cancelled would alone eliminate the deficit caused by the Republican’s planned tax bill. Nonetheless, the talk is not about cutting military spending to combat the deepening of the national deficit caused by the tax cuts; it’s about cutting Social Security, Medicare, Medicaid, welfare, food stamps and other social program spending.

Stupidity and willful blindness. These are the twin blights afflicting our democracy, and I don’t see that changing. At least not until military spending bankrupts the economy entirely or leads to a catastrophic new world war, or until the rising seas have submerged most of the nation’s coastal cities, as well as the Florida peninsula, Cape Cod, much of the Gulf Coast, and the Los Angeles basin, and climate change-induced draught has turned much of the western and central US into parched desert and dustbowl.

Maybe Americans will wake up then, but of course by then making America “great again” will involve some pretty heavy lifting.