You say you feel my pain
But
You don’t even know what pain is.

Oklahoma City — After spending the last three weeks in Oklahoma City covering the Occupy OKC encampment, I was shocked to learn of Street Poet’s passing yesterday. It just didn’t seem possible that this talented, loving young man whom I had known for just ten days could be taken away so suddenly.

The man we all called “Street Poet” was about 18 years old and homeless. He said he had spent a lot of time in foster care growing up. In his final days, he had complained about asthma attacks in the morning. He showed no other signs of physical or mental health problems, drug addiction, or suicidal tendencies. He was a joyous presence in Occupy OKC. 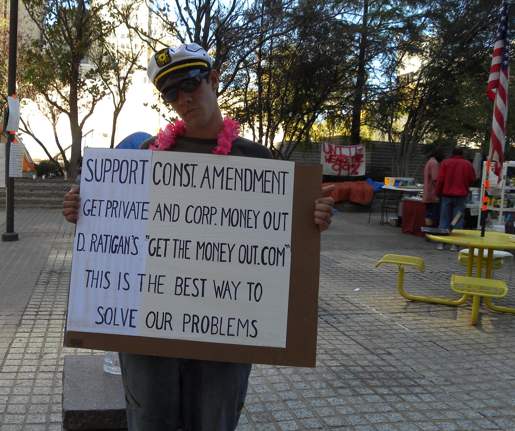 Street Poet was discovered unresponsive in his tent by another camper around 2:45 on the afternoon of Halloween. There was no blood, or signs of trauma. No alcohol, street drugs or drug paraphernalia by his bedside. It is generally believed that Street Poet passed sometime during the night, as rigor mortis had already set in by the time his body was found.

His mother and sister live in Clarksville, TN and want to fly to OKC to claim his body. Occupy OKC is trying to raise donations for Louis’ family, who cannot afford airfare. Please spread the word.

“Due to the victim’s young age and because the body was unattended at the time of death, we are currently processing this as a crime scene,” said Lt. Kevin Barnes of the Oklahoma City Police Department. “It appears he died of natural causes, but the medical examiner will ultimately determine the cause of death. We are conducting an extensive investigation and making every effort to figure out what caused this young man to die.”

Homicide detectives worked into the night at Kerr Park, site of the downtown OKC occupation, looking for clues. Police cordoned off the tent city area in the plaza’s mezzanine, while allowing occupiers to remain in the lower level of the park. Once the crime scene investigation was concluded, campers were allowed to return to their tents. But one tent was now conspicuously missing from the family circle.

Here is one of his recent poems:

It is so hard to find help
out in the world
When the world doesn’t care.
My life is like an open book
Just read the words and you know
every blessed curse.
Don’t be concerned if you find
my past startling
’cause so do I.

I first met Street Poet around the 20th of October. He bounded up to me, introduced himself in the middle of an interview I was conducting with someone else, and proceeded to lay down some poetic rap about sleeping under bridges. He was tall and thin with bushy brown hair. His eyes sparkled with curiosity and he was always smiling. He looked like a college kid from a white middle class background, except that he never had any money and was missing teeth. The following night he confided to me that he was homeless, and that his family history had been short of ideal.

Street Poet said he was originally from Naples, Florida. He had left his foster home at age 16, earning his living by performing (and usually sleeping) on the streets. Over the past two years, he traveled on foot from Kansas City through Iowa, Nebraska, Kansas, and finally, Oklahoma City, where he landed approximately two weeks ago. His plan, he explained, was to reunite with his brothers who now live in Kansas City, “so we can be a family again.”

Although some of the local occupiers know Street Poet’s real name (or at least the name he gave them), the group is not disclosing it until his family can be located and notified of his death. Most people guessed his age to be early twenties. But from the timeline he gave me in our interview – having left home at 16, which he says was two years ago – he would be only 18 years old now.

When Street Poet arrived at Occupy OKC’s Kerr Plaza encampment about a week and a half ago, he quickly made new friends. People noticed how he came out of his shell a little bit more every day; how his self-confidence grew; how he seemed to revel in the love and acceptance here that he had apparently been denied in the past. His public displays of affection at Kerr Park are what those who ever met him will remember most. Street Poet was always handing out free hugs to any and all, even total strangers just walking by.

“I was almost taken aback by Street Poet’s first hug, nothing held back, all innocent exuberance,” Occupy OKC community moderator Mark Faulk remembered. “But in the time that he was there, I found myself looking for him, waiting for his smile and his welcoming embrace, both coming and going, and sometimes just spontaneously for no reason at all. He gave me more hugs in the space of a little over a week than many people get in an lifetime. After what would turn out to be his final performance, I turned the tables on him…I sought him out, wrapped my arms around him, and congratulated him on an amazing performance when he recited his poetry last night. As always, he smiled.”

Occupiers such as Manny Whitlock were impressed enough to bring donations just for Poet, such as a nice suit to perform in. On the last night of his life, Street Poet was asked during an interview how he liked his new threads. “Now look at me. Now look at me!” he said. “I’m now part of the 99%, along with all these people.”

“These people” had become his new family. There is a certain sense of camaraderie and fellowship that develops inside Occupy camps everywhere. Camping out with people from all walks of life, in all kinds of weather, in pretty close quarters, for weeks on end more or less compels people to get along together. Neighbors know their neighbors. People look out for one another. After all, the reasoning goes, we are the 99% and we’re all we’ve got.

“He was the most giving person. Hugged me 20 times a day. He just wanted to be loved.” said Heidi Owens, a 40 year-old mother and “compassion moderator” in the Compassion Tent. “He told me I was the only mom he ever had. He’d sleep outside by my tent. He always seemed thrilled to play with my four year-old. Just a sweet boy that the system failed. Honest to god, his was a life full of potential. I saw it every day. He was smart and articulate and kind and he found his place here. This entire movement is grieving him tonight.”

Protester Matt Walden, 19, described Street Poet as “a very loving man who happened to find us and find a home. The system never gave a shit about him, but we did. I see him as a martyr for the Occupy Wall Street movement. Guys like him – the ones who slip through the cracks of our society – are the reason we occupy.”

Street Poet’s last day on earth was possibly his best one. He’d been treated to a home-cooked meal and got some new clothes. He performed for a receptive crowd of 50-60 people, many of whom had never noticed how talented he was until that moment. He had said on several occasions that in the last two weeks he had found his true family, that he was happier than he had ever been.

“He read a poem about his being homeless and it was quite moving,” said local attorney Jay Trenary, who also moderates the Occupy OKC legal committee. “He was a great guy, kind heart. We had a candlelight memorial for him last night.”

There is talk of a larger, more public gathering in his honor later this week.

The last time I saw Street Poet two nights ago, he ran up to me as I was on my way home, threw his arms around me and blurted out the words “I love you.” I hugged him back and told him I loved him too. “Go tell my story,” he said. “Tell the world in your article.”

Little did I know then just how prophetic that final request would turn out to be. Now I’m sitting here two days later writing his obituary. The sweet kid I came to regard as my new little brother suddenly turned out to be the first casualty of the revolution.

Street Poet wanted me to tell his story, and I’ve done my best under the circumstances. But he told his own story better than I ever could, anyway:

The official Occupy OKC Facebook wall filled up with messages of love, sorrow, and solidarity yesterday. Occupy groups from as far away as Portland, Oregon and Galway, Ireland shared words of support. Occupy organizations around the state (now formally united as “Occupy Oklahoma”) also expressed their condolences.

“We will not let up. We will not back down.” said Tim “Gonzo” Anderson. “Street Poet lives on in our every march, every chant, and every person we talk to about this movement. We are all street poets, and we call out his name as he would call out all of ours. Solidarity.”

LORI SPENCER is a veteran journalist and musician based in Austin, Texas. Currently unemployed following a mass layoff, she has been documenting the Occupation Movement for ThisCantBeHappening! as it spreads across the American heartland.