The police slaying of musician Corey Jones in South Florida highlights one of the most reprehensible aspects of law enforcement in America — the ubiquitous undercover cop.

As yourself: What was a police officer doing driving along the highway at 3 in the morning wearing blue jeans, a T-shirt and a baseball cap in the posh neighborhood of Palm Beach Gardens? He wasn’t undercover for the purpose of infiltrating a gang. He wasn’t trying to fit into some commercial or street scene where there was a lot of suspected crime going on. He was just driving around randomly on patrol in a community known for its paucity of crime. And when he stopped at the dark entrance ramp to I-95, allegedly to check on what he claims he thought was an abandoned vehicle on the side of the road (where Jones’ van had stalled out on him and he was waiting for road assistance to arrive), this cop didn’t turn on any flashing police lights, which at least would have suggested to anyone in the van that he was a almost certainly a cop.

He just walked towards the van.

Now if you were someone like Jones, a lone black musician with some valuable drums and equipment in your vehicle, and you saw someone like Officer Nauman Raja approaching you in the dark, you’d be scared — especially if Raja had his gun drawn, as he well might have, given how he was approaching the vehicle unannounced.

The last thing you’d suspect would be that he was a police officer.

In Jones’ case, we know he had a licensed handgun. In the US that’s not illegal. In fact, many Americans say it’s a common-sense precaution. You can agree or disagree with that argument, but it was a purely legal thing for him to do.

If Officer Raja was actually on patrol hoping to “catch burglars” as claimed, he should certainly have been equipped with a car that could flash its lights alternately, if only for safety purposes. Parking on the side of a highway or on ramp late at night presents hazards simply because tired or inebriated drivers may not see the stopped vehicle and could plough into it injuring or killing both officer and driver. As well, as mentioned above, it would also allow the officer making a stop to alert the driver that he is a cop, and not a criminal. Many undercover police cars are even equipped with flashing blue lights which appear when flipped on, but which are not visible otherwise. Clearly, Raja’s vehicle either did not have those signal options, or he chose not to use them for some inexplicable reason. 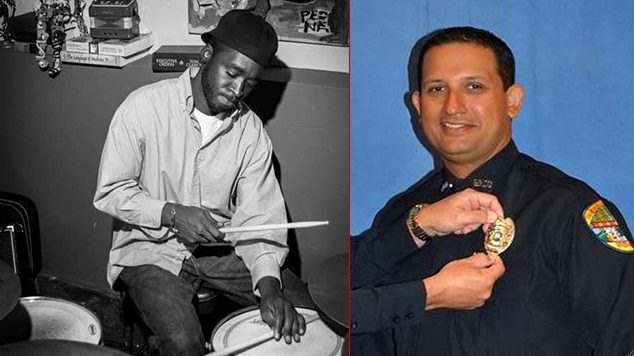 We can’t know what actually transpired that led to Jones’ death, because neither Raja’s undercover van nor his body were equipped with a videocam, but the fact that Jones’ body was located 80-100 yards from his van indicates that he was trying to flee his unidentified assailant. His gun was not fired, which is important. He may never have even drawn it or removed it from his van. The only gun fired was Raja’s and it was fired six times, reportedly hitting Jones with three of those bullets in the side and the arm.

How far away from Raja was Jones when Raja fired? We’ll have to wait to learn that. If it was at some distance, we have a clear case of murder by cop: shooting a fleeing suspect. If it was at close range, an honest exam by an honest medical examiner (sometimes a scarce commodity!) could indicate whether Jones was facing his shooter, or was turned away in some fashion. (Apparently there were surveillance cams in the area of the on-ramp but police have released nothing as of this date. They should. The suspicion is naturally that they would have already been released if they supported the cop’s version of events.)

But even if Jones had been holding a gun, his killing by this undercover cop must be seen as a criminal act, not as an unfortunate misunderstanding. Had Raja identified himself clearly from the outset, with lights and the holding out of a badge, and with a call-out in a loud voice announcing his identity to anyone who might be in the van, it would not have happened.

Why would Jones have fled from a cop? He wasn’t doing anything wrong. His car was broken down, he had a legal firearm he had no need to hide, he had a legally registered van and a valid drivers license. If he fled, the car belonged to him so he would have been easily located and caught and arrested later anyhow on some charge like failure to obey an officer or something. Clearly he fled because he was afraid for his life. Had he been shot once already by the time he began to run? If so, a second or third shot killed him, and that would be murder–at least in any honest and fair society — just as it was in the North Charleston, SC cop slaying of Walter Scott earlier this year.

Justice being as skewed as it is in today’s United States, it’s likely that Officer Raja will escape any serious charge, but no one could successfully argue that his victim Corey Jones should be dead today.

There needs to be a national campaign to rid America of undercover cops. The whole idea reeks of police-state-ism. Sure, there can be times when an employing an undercover cop makes sense. I have a cousin who, while a police detective, worked undercover once as a “fence” to lure out a whole slew of crooks seeking to cash in on all the stuff they were burgling in his city. He let his hair grow, stopped shaving, and was playing a role. That’s a good use of undercover work. He wasn’t making arrests. He was gathering evidence on crimes and criminals. If he had made arrests, he would have clearly identified himself, ending the ruse. But he really didn’t have to. He was identifying the crooks and gathering evidence to be used against them. The crooks could be picked up later by officers in uniform, working with back-up and controlling the situation.

Going undercover to crack a crime syndicate can make sense too.

But driving around in unmarked cars just to look for people who might be committing minor non-violent crimes like burglary, or worse, for minor traffic violations, is reprehensible. It’s dangerous for honest citizens, it’s dangerous for cops, and it creates a sense of paranoia among the public: Am I being watched? Is that person going to attack me or rob me?

When retired international tennis great James Blake was attacked in broad daylight outside his hotel in mid-town Manhattan last month by an undercover cop, part of a team of cops investigating an alleged credit card fraud, he was damned lucky he wasn’t killed. The officer, James Frascatore, never identified himself. He just attacked Blake. Only after Frascatore had slammed his victim face-first onto the sidewalk and climbed atop him, yanking his arms violently behind him to cuff him, did Blake realize he had been assaulted by a cop. Had he been more successful in resisting, the incident could have easily ended not with the Frascatore getting in trouble, but with Blake being shot to death like Jones or strangled by a choke hold like Eric Garner.

And we’re talking about an unarmed man suspected (wrongly) of being a credit card fraudster, not a violent criminal.

Enough! No more undercover cops on patrol, or just trolling for busts. No more Corey Joneses!