So National Security Agency Director Keith B. Alexander, who, along with his boss, Director of National Intelligence James R. Clapper Jr., thinks that “if you can collect it, you should collect it,” now is asking whether it might not be such a good idea in the case of spying on the citizens of US allies like Germany, France, Spain et al.

“What’s more important,” the chief spook reportedly asked, following revelations by NSA whistleblower Edward Snowden that the NSA has been spying on the electronic communications and phone conversations of millions of people in European other countries around the world. “Partnering with countries may be more important than collecting on them.”

This unusual moment of reflection came before the later disclosure that the Alexander’s super spying outfit was also tapping the cell phones of the leaders of America’s major allies, including France and Germany, not to mention Brazil.

Caught with his electronic pants down, Alexander, who is also a four-star active-duty general, is suddenly acknowledging that spying might have a downside.

In this case, the downside he is acknowledging is a diplomatic one: if you spy on the people — and the leaders — of a friendly state, violating a basic trust that had been taken for granted, you risk losing that trust and losing a long-time friend. Alliances can founder over such abuses of trust.

What Alexander and his truth-challenged boss Clapper are not considering, though, is whether there is also a bigger question: Isn’t maintaining democratic freedoms and the trust of the American people more important than collecting every possible datum of information about them, and monitoring their every move and every communication?”

The answer, of course, is obvious, which is why Alexander and Clapper are not asking it. 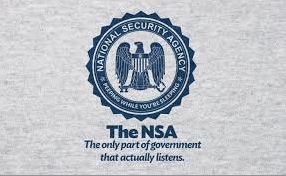 Spoof NSA T-shirt: Way back in 2011, the agency threatened to sue the company, LibertyManiacs.com, on the basis of an obsure federal law outlawing the “mutilation or alteration of government seals,” in order to prevent sale of the shirt (click on image to check out the company).

Not that Alexander and Clapper care. They don’t answer to the American people. They work for the US government, and the government these days — the president, the Congress and the Supreme Court — is clearly not “of, by and for” the people. It is of, by and for the corporations and the elite, and that oligarchic power elite, having stolen the country blind over the past several decades, is getting worried that the public is starting to wake up to, and grow restive about it.

The ruling elite wants an all-seeing NSA to keep the public in check, and to enable it to spot, and then to crush, any outbreak of rebellion, as was done so effectively to the Occupy Movement in the autumn of 2011.

It’s probably fair to say that the crushing of Occupy was the first battle of the second American revolution. Looking back someday, it will also probably be recognized as the trial run of the NSA security net.

We can’t expect much from Congress at this point. These are the same pathetic and fearful “representatives of the people” who gave a shameless standing ovation recently to the Secret Service and Capitol Police thugs who “protected them” by gunning down an unarmed and mentally disturbed young mother who had panicked, driving her car erratically in the vicinity of the White House and the Capitol building.

The people of New York City just told New York City Mayor Michael Bloomberg what they thought of his paramilitary NYPD response to the Occupy Movement and his years of coddling the wealthy in that pre-eminent American metropolis, replacing him with a progressive new mayor, Bill de Blasio, who has vowed to attack the city’s huge income divide, starting with a surtax on incomes of $500,000 or more to help pay for cancelled public kindergarden programs, and who has said he wants to put a stop to the police department’s widely loathed stop-and-frisk program, which has effectively criminalized a whole generation of young blacks and latinos.

The rest of the country may be just behind New Yorkers.

A good start would be demanding the sacking of Alexander and Clapper, two men whose fascistic policies and philosophies are antithetical to freedom and democracy. That should be followed by a national campaign to oust any and all politicians who do not stand four-square for a robust defense of all the articles of the Bill of Rights.

Gen. Alexander may not be asking, “What’s more important: defending freedom or collecting information on all the nation’s citizens?” but the American people already know the answer.

It has to be defending freedom.

Tenderized by life (followed by a footnote on LOW and thoughts on the writing of this poem)
There was a dog in my dream with 6 legs. One of the dog’s legs didn’t work. He didn’t need that leg. He had 5 perfectly good legs. This dream…
All Gary Lindorff's Posts