Philadelphia — You wouldn’t know it from reading or watching or listening to the corporate media, or even, incredibly, to most of the alternative media, but a huge grass-roots campaign has sprung up promoting a mass four-day demonstration in Philadelphia during the July 25-28 Democratic Convention. The promoters of this campaign so reminiscent of the 1968 Democratic Convention in Chicago are backers of Bernie Sanders who totally reject the idea of seeing their candidate, Bernie Sanders — or themselves — just rolling over at the end of this year-long effort and endorsing Hilllary Clinton.

Sanders has won nearly ten million votes in the primaries so far including his latest strong come-from-behind win in Indiana, and that is only a fraction of his national base of support, given that many states have closed primaries where independents — his strongest backers — have been barred from voting.

If only one in 10 or one in 20 of those backers were to make their way to Philadelphia, the scene here could end up making the Pope’s recent visit look like an ordinary rush hour, or maybe a Mummer’s Parade.

What Sanders has been saying lately — that he wants to give the Democrats the “most progressive platform in history” — is a joke. Sanders knows it, and so do all his backers. The party and its candidates never pay any thought to platforms, which have always served as simply a sop to keep disgruntled progressives on the plantation. 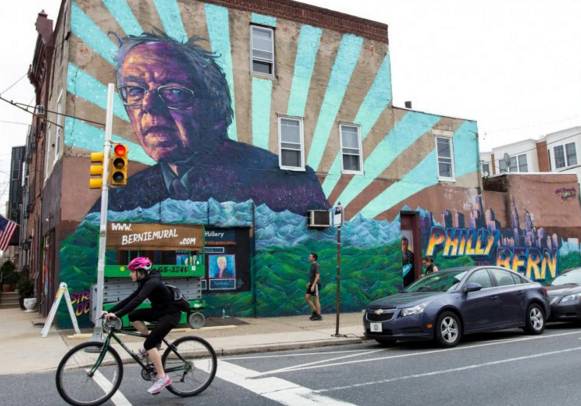 What the demonstrators planning to pour into Philly want is for Sanders, if as expected he loses his campaign for the Democratic nomination, to walk away from the convention and the Democratic party and to announce plans to run in the general election, either as an independent or, better, as the nominee of the Green Party, should that group will accept him (the Greens hold their own convention in the first week of August). Some in the Green party have been trying to discuss the idea with Sanders, though others oppose the idea.

You haven’t read about it on Common Dreams or at Truthout, or heard about it on Democracy Now!, but Kshama Sawant, the feiry socialist city councilwoman from Seattle, has a petition out calling on Sanders to run as an independent. That petition now has 21,000 signatures and counting. Sawant and the Green Party ‘s likely presidential nominee, Dr. Jill Stein, have been reaching out to Sanders privately too, so far to no effect. 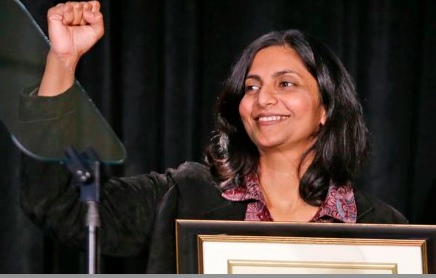 Seattle's socialist councilwoman Kshama Sawant has a petition calling on Sanders to run as an independent for president (click here or on the image to hear the author interview Sawant on the Progressive Radio Network’s ‘This Can’t Be Happening!’ radio program

What Sanders backers hope is that by showing up in the tens or hundreds of thousands in Philadelphia streets, calling for him to not back Clinton, and to run through to November, is that they will move Sanders to do the right thing, and not undermine or destroy the “political revolution” that he did so much during these last few months to kick-start.

To get a sense of the thinking behind this campaign, which has sprung up almost over-night, check out this Facebook page.

The idea of a third party run clearly spooks many traditional Democrats. As one local Democratic activist in my community put it, “Bernie may be the better candidate, but there’s no chance he’ll ever be elected as a third-party candidate. He’ll just help to elect Trump!”

There’s a view on the hard left too that Sanders running as a Green or even as an independent would be a mistake — not because it might elect Trump, since on the left, there’s not much difference seen between Clinton and Trump, and Trump is even viewed more favorably by some, who see his foreign policy ideas as more isolationist that Clinton’s neocon proclivities for promoting conflict with Russia and China and regime-change in third-world nations. Rather, some on the left feel that Sanders shouldn’t be able to simply usurp a top spot on the Green Ballot, or that he doesn’t merit it because he hasn’t taken a stand against US empire and militarism, and that the Greens should build their party on their own, not by riding some candidate’s notoriety.

Both perspectives are misguided, though. Clearly the Sanders phenomenon, which has picked up where the 2011 Occupy Movement left off, and catapulted anti-corporate thinking and democratic socialist ideas like Medicare for all and free college tuition into mainstream political discourse, is historically unprecedented. It which has already energized tens of millions of people — especially young people.

Sanders’ campaign, by exposing both Clinton’s corrupt record of corporate shilling and warmongering, and by also exposing the manipulative and controlled nature of the party’s primary process, has helped to thoroughly disgust millions of, and perhaps the majority of Democrats with a party that has long since moved away from being a party that addresses the needs and concerns of ordinary people. There is also considerable disgust among Republicans and independents with the corrupt US political system and the venal candidates it puts forward for them to chose between.

There is now a unique historical political moment, in which a candidate like Sanders, with a demonstrated mass base of support, and a clear ability to present his case without the help of the corporate media, thanks for financial support from that mass base, can actually stand and challenge the two corrupt main parties. That is to say, if Sanders were able to gain the presidential nomination of the Green Party, which has a ballot line already in states with 310 electoral votes, and with the potential to add lines in more states, to actually compete and even to win the presidency. With the funding he would certainly continue to get from his millions of backers, and the use of heretofore unavailable social media communications, Sanders, whom polls show to be more popular and better liked nationally than either Trump or Clinton, could astound the conventional thinkers, pollsters and odds-makers and spark a groundswell of support among ordinary Americans of all races, classes and political leanings that could sweep him into the White House, and a lot of like-minded candidates into Congress.

That may be hard for many battle-scarred progressives to believe, but it is worth the effort. The worst that could happen is that either Trump or Clinton would win regardless of what Sanders does. But the truth is, as recent Reuters poll indicates, it will be either Trump or Clinton if Sanders does nothing, and quite possibly it could be Trump. Viewed another way, a Sanders endorsement of Clinton at the end of the convention, wouldn’t make any difference either. Those backers of Sanders who see Clinton as a shameless corporate puppet will not take his advice and vote for her if he tells them too. They’ll just dismiss his endorsement as “politics as usual,” and will make other decisions on their own.

The real tragedy would be if Sanders just gives up in the end, and a historical opportunity to try and jumpstart the creation, finally, of a genuine alternative to the two-party duopoly that has kept American politics in a pro-corporate straight-jacket for almost a century is missed and perhaps lost.

Personally, I’m all in being on the streets of Philadelphia in late July to push Sanders to take the next step and run on in the general election! No to a Hillary endorsement! Yes to an independent Sanders run for the presidency!

Meanwhile, for those who want to come and join the protest movement, here are some useful contacts: