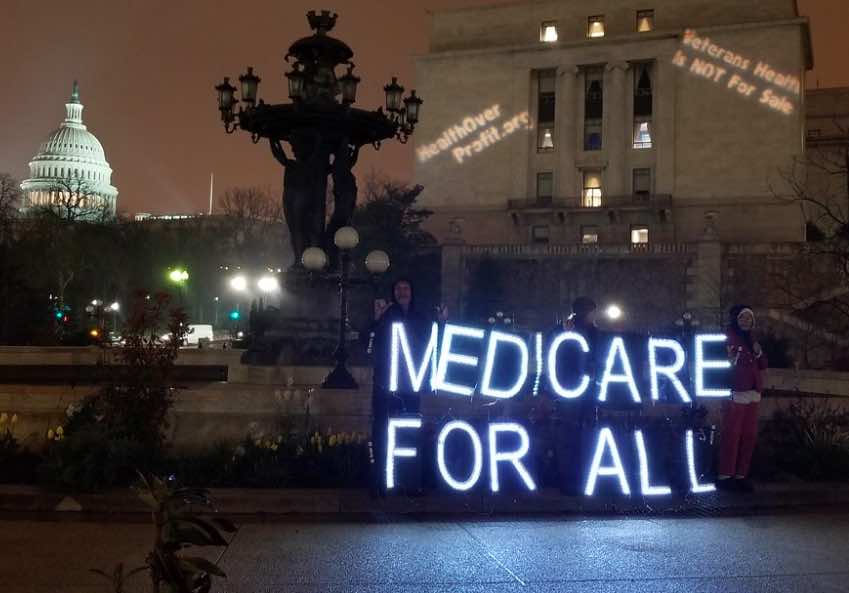 Until progressive Democratic candidates like Bernie Sanders and Elizabeth Warren forthrightly declare that Yes! socializing health care by making the government the single insurer of every American will require a hike in taxes, but that everyone will benefit in the final analysis, they will never succeed in winning over American voters one what polls show it the biggest issue this election cycle.

The most potent “third rail” in American politics is raising taxes. The reality is that this country, contrary to national mythology, was founded not on a noble passion for freedom, but on a selfish and far less edifying loathing of taxation. We are a nation of people who appear to want a lot of things like better roads, better schools, cleaner environment, government services when we need them with no waiting, and politicians who aren’t corrupt, but we don’t want to pay for any of it.

We know our healthcare system is gawdawful — too expensive to afford, dependent upon our hanging onto our often loathsome and oppressive jobs, long waits to get care, ever-higher deductibles that can become so high we cannot even afford them, and too many people without access to care, who end up getting seriously ill and then become our burden when they end up needing expensive free care at our public hospitals.  But even though almost every other modern country in the world has managed to solve that problem (and much more cheaply than we are doing) by having the government take over the task of providing care, we don’t want to hear about it because we are told they do it by paying for healthcare by higher taxation. What we don’t hear is that many of those countries have higher standards of living than we do, better funded retirements, longer vacations, and free college for their kids, most of that also funded by taxation.

Granted that the media, including supposedly progressive media like NPR, are not helping. They all keep pushing the false argument that Medicare-for-All would be “too expensive,” or “impossible to achieve” given the opposition of Republicans and conservative Democrats in Congress, and of course given the American public’s supposed allergy to raising taxes.

But here’s the thing:  People need to hear the honest story.  Voters want a better, more reliable and more affordable health care system. and they are smart enough to know that talk of raising taxes on the wealthy and on corporations isn’t going to do the trick alone. They know that providing “Medicare-for-All” — and that’s improved Medicare, not just what the elderly currently get, with all the limitations on coverage and the need to buy Part B coverage for doctors and Part D for drugs, but full coverage of all medical treatments — will cost a lot of money and that it is going to end up requiring higher taxes. That makes them dubious.

So progressive candidates: Don’t duck and weave on this. That approach won’t work. Neither will saying “healthcare is a right” (let’s face it, most Americans don’t give a hoot about whether other people can afford health insurance or afford to see a doctor; only about whether they can afford insurance and their family can see a doctor).  In fact though, you’re starting from a good place, with polls showing that even with the prevailing media bias against nationalizing health care, and with Americans’ prevailing lack of social conscients, a majority of all Americans favor Medicare-for-All — even 52% of Republicans!

I should note though that in Canada, the tax to support Medicare starts at incomes of $55,000. Below that there’s no tax. And Sanders’ Medicare-for-All bill in the Senate (blocked from consideration by Republicans), has proposed a 4% levy, but it would not apply, he says, to family incomes below $29,000.

Meanwhile, the numbers make it clear that socialized medicine is cheaper. Our country spends a vastly greater amount both as a percentage of GDP (18%) and on a per-capita basis  (a staggering $10,000 for each and every of us) on health care. And for all that money we get a great deal less — particularly with some 30 million of us, about 10 percent of the population, left with no access to health care — than the rest of the developed world gets. Those other developed nations in contrast spend between 7-12 percent of GDP  and just $4,000 (UK) to $8000 (Switzerland) per capita on their people’s healthcare, while having better health statistics to show for it, and with everyone being covered.

Clearly, for the vast majority of us — the poor, the middle-class and even most of the rich — national health care would mean a huge savings, even factoring in an increase in our taxes.

To say “we can’t do this” as the so-called “moderate” Democratic candidates running for the presidential nomination argue, requires one to believe that this supposedly “can-do” nation of ours simply cannot do what so many other nations are able to do: to competently and with minimal corruption run a government-operated health care funding system. Besides, we already do it:  Medicaid in case you didn’t notice, is socialized medicine in the form of federal government medical insurance — you just have to be over 65 or disabled in order to get it, and the Veterans Hospital system is truly socialized medicine on the British National Health System model — hospitals are owned by the US govenrment and doctors and staff are all salaried employees of the federal government. And both work beautifully. Indeed in study after study, the VA’s hospitals are found to deliver the best or equal to the best medical care of any hospital system in the country.

Maybe some people still really believe this absurdity that the US government cannot do anything well or efficiently. It is a shiboleth of the libertarians, and a standard talking point for conservative Republicans who like Hari Krishnas mindless chant that “business is always better at doing anything than government.” (Question: Have you tried getting customer service for your computer, bank or cell phone from some business lately? Which is worse: that or calling the DMV or Social Security administrartion? I’ll take the latter hands down.)

But this mantra flies in the face of reality. Despite the stale nasty jokes, the US has an amazing government postal system that for less than it costs to pay for a short stop at a parking meter can deliver a letter across the country even from and to a small rural address, reliably and in 24-48 hours, even in bad weather.  We have a US Coast Guard that can rescue capsized boaters even in a hurricane. We have a government space program that can put rovers on mars and even the planets of Saturn. Surely we can run a quality health insurance program that covers everyone and does it cost-effectively.

But here’s the rub. Everyone who earns enough to have to pay income taxes will pay for Medicare-for-All with a higher tax bill, just as we pay for our Social Security retirement program. (Actually current Medicare, limited as it is, is also loved and ardently supported by its elderly and disabled recipients and their families, and it is funded already by a payroll tax, which people don’t seem to mind much.)

I think that the Democratic candidate who leveled with the voters and just stated it this way, explaining that we all need to be willing to pay a bit more in taxes in order that all of us can have our own government-funded national health insurance program (just like they have had in Canada by the way for almost half a century now), would be enthusiastically supported by most American voters, including many Republicans. We can argue about the finer points like whether the tax should be a flat one like Social Security, with the same percentage levied on everyone, or everyone up to a certain income level, or a graduated one where the poor pay nothing if they owe no income tax, or a small amount, the middle class pay a smaller percentage, and the wealthy pay more commensurate with their income tax rate. These are minor technical issues. The main point is to simply explain forthrightly that such a program will require a tax hike, but the the net cost to virtually everyone will be lower than what they are paying now in premiums, co-pays and out-of-pocket, not-covered costs for things like drugs, medical equipment, etc., not to mention taxes and higher insurance premiums to cover the “charity” treatment costs of those hospitalized with no insurance.

If I were Bernie Sanders or Elizabeth Warren, I’d be campaigning regularly with a representative of Canada’s single-payer Medicare plan by my side to explain why Canadians, who have had their government health care system in place since 1976, have maintained it even though in the intervening years, they have had more conservative national governments than liberal ones, but no government in Canada has dared to cut or try to eliminate the system, knowing they’d be out on their ear in an instant if they did. I’d also remind voters that when Lyndon Johnson proposed Medicare in 1965, Republicans, backed by the American Medical Association, had Ronald Reagan on the tube warning of  the looming nightmare of a “socialist dictatorship” in America if the bill passed giving the elderly and disabled government medical insurance.

An honest debate on this issue is what we need. Not campaigns that duck the big point by trying to avoid the third-rail tax issue.