Few people thought, back in 1941, that the Japanese military could defeat or pose a serious threat to the US military. Yet, by April 8, 1942, only five months into the war, United States’ forces stationed on Luzon, our Philippine colony, had surrendered to a upstart Asian colonial power, the empire of Japan. Gen. Douglas MacArthur, the US commander in the Far East, had fled in ignominous defeat from the colony to Australia a month before. The remaining Filipino and American prisoners of war were left behind and forced in a death march of 65 miles to move to POW camps, where they remained under brutal conditions for the rest of the war. The name “Bataan” has since come to symbolize the depths of depravity following defeat.

Bataan was invoked again by journalists to describe the conditions at the Brooklyn campaign headquarters of then-Democratic frontrunner Hillary Clinton in the wake of an improbable and unexpectedly harsh finding by the inspector general (IG) of the State Department. The State Department’s own watchdog found its former boss, Secretary Clinton, to have clearly violated the rules and procedures of her own agency and the legal requirements of the National Freedom of Information Act. Clinton, the IG’s report said, posed “significant security risks” through her decision to use a private email server for professional business while she was secretary of state.

The IG’s report promises to be the centerpiece of the Republican attack on the Democrats in the fall election if Secretary Clinton grabs the party’s presidential nomination. 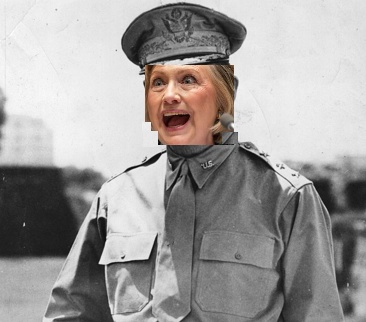 Like Gen. MacArthur fleeing capture by advancing Japanese forces in the Philippines, Hillary’s campaign, after the IG’s report, is waiting for the FBI probe shoe to drop

While her damage-control operation — a fixture in the Clinton political machine through decades of scandals — has gone into full gear, and a largely supportive corporate media has predictably tried to play down the import of the IG’s report, there is still a major FBI investigation underway of the same misconduct by former Secretary Clinton, which has included granting immunity from at least one key member of her staff who handled her home communications system — a staffer who already took the Fifth over the issue at a House hearing. If the FBI were to indict Clinton, her situation would start to resemble General MacArthur’s in the spring of 1942 — surrounded with no way out but to flee the scene.

Some of Clinton’s mass media friends have attempted, predictably, to link these developments to the continuing assault by what she once called, “ … a vast right wing conspiracy.” The problem with this defense lies in the very nature of the IG process.

Most agencies of the Unites States government have inspector general offices. The IGs operate independently within each agency to investigate waste, fraud, mismanagement and abuse of federal resources. IGs have wide investigative latitude. The State Department IG is a direct appointment of the president of the United States, Barack Obama, hardly part of a vast right wing conspiracy. (FBI Director James Comey, while a former Republican-appointed federal prosecutor, was also appointed to his current post in 2013 by Obama.)

Inspectors general are the go-to guys for redress when federal employees spot illegal behavior. In a perfect world they are the guardians of decency and good process.

Most federal employees and contractors rarely expect an IG to fault the boss at the top. The relationship between IGs and the managers they scrutinize is often too cozy. For example, at Pasadena’s Jet Propulsion Laboratory, the IG offices are located on a different floor but in the same building as the top management. They ride the same elevators. They eat in the same cafeteria. They literally breathe the same air — or “conspire” together each day. Most JPL employees, who want to keep their jobs, know better than to turn to the IG for help if the offender is among the top brass. Yet, the State Department’s IG, appointed by President Obama, found serious improper behavior on Secretary Clinton’s part.

Some of Clinton’s mass media supporters were caught flatfooted by the IG’s findings on the private use of an email server for State Department business. The New York Times, which has endorsed Clinton, editorialized, “Contrary to Mrs. Clinton’s claims that the department had ‘allowed’ the arrangement, the inspector general also found that she had not sought or received approval to use the server.” The Times warned ominously, “Donald Trump, her Republican rival, will be merciless in swinging the inspector general’s report like a cudgel.”

The New York Times’ Maureen Dowd raised the Bataan analogy last month in her widely read column. Dowd said, “Hillary’s Bataan Death March is making Republicans reconsider their own suicide mission with Trump.” She speculates that they are thinking, “Maybe Teflon Don could pull this off.” The widely respected columnist Jeffery Goldberg of the Atlantic echoed Clinton’s Bataan analogy a week later on “Face the Nation.”

When MacArthur was surrounded in the Philippines, President Roosevelt understood the political loss he would suffer if the Supreme Commander of our colonial forces in the Philippines were to be captured. MacArthur was ordered to move with his family to Australia. The surrender of the colony was left to Generals Edward King and Matthew Wainwright.

The Democrats have until their convention in July to get Mrs. Clinton out of harm’s way. The option of a brokered convention is one solution. Assuming the Clinton supporters would never accept Senator Sanders, the superdelegates may attempt to find a “compromise candidate” acceptable to both the Sanders and the Clinton camps. Obviously this compromise would have to be a widely accepted “parent figure.” Adam Nagourney of The New York Times has pointed to Jerry Brown as someone who can be attractive to both camps. Other possibilities include Nancy Pelosi and Joe Biden.

Desperate times call for desperate measures. If FBI Director Comey decides to take the State Department IG’s lead and indicts Clinton, or at a minimum releases a damning report on her actions, it will be desperate times at the DNC.

Robert Nelson is a founding member of the Pasadena Foothills Democratic Club. An elected delegate to the Democratic National Conventions in 1988 and 1992, and a Sanders delegate to this year’s Philadelphia Democratic Convention, he contributed this article to ThisCantBeHappening!.