Someone should have warned tHillary Clinton and the goon squad at the Democratic National Committee that old-fashioned red-baiting isn’t going to cut it in today’s United States. It’s not the 1950s anymore and the Soviet Union and Comtern are ancient history.

With the latest batch of polls showing Bernie Sanders, in the wake of his feisty showing in Sunday’s debate against Clinton in Charleston, SC, gaining on her in both early primary states of Iowa and New Hampshire, and nationally, the Clinton campaign and the leadership in the Democratic Party seem to have lost both their minds and whatever principles they may have had.

According to one poll, by CNN/WMUR, conducted just days after the debate, Sanders is now ahead of Clinton in New Hampshire by a blow-out 60% to 33%. That’s nearly triple the margin the prior CNN/WMUR poll found in December when the numbers were Sanders 50% and Clinton 40%.

Meanwhile, the latest CNN/ORC Iowa poll, just released Friday, shows Sanders leading Clinton among likely caucus-goers in that state by 8 percentage points 51% to 43%. That is a big turnaround from the same poll done in December, which showed Clinton ahead 54% to 36% for Sanders. Even if there are other polls showing Clinton still marginally ahead in Iowa, the trend has been clear of voters moving from Clinton to Sanders, especially over the past two weeks.

Hence the Clinton campaign’s panicky response, which has been to start having surrogates go out and paint Sanders as a “red.” 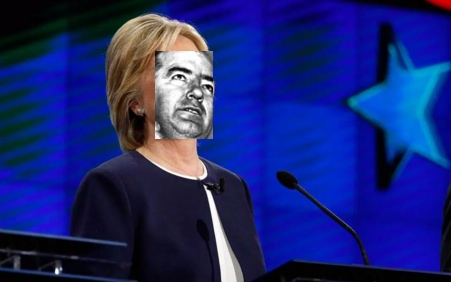 Her campaign in trouble in Iowa and New Hampshire, and her poll numbers falling nationally, Hillary has turned to Sen. McCarthy for inspiration (Joe, not Gene)

They don’t actually call him a commie, but they do the next closest thing, warning that if Sanders were to win the Democratic nomination, he would then be attacked by whoever is the Republican nominee, who would “surely” call him a communist.

How, actually, does this differ from Hillary herself just calling him a commie? Well, it doesn’t. Her campaign is calling him a red.

In that article, we read the likes of Missouri Gov. Jay Nixon, saying of Sanders, “Here in the heartland, we like our politicians in the mainstream, and he is not — he’s a socialist. He’s entitled to his positions, and it’s a big-tent party, but as far as having him at the top of the ticket, it would be a meltdown all the way down the ballot.”

Then there ‘s Sen. Claire McCaskill of Missouri, a neoliberal Clinton supporter, who tells the Times, “The Republicans won’t touch (Sanders) because they can’t wait to run an ad with a hammer and sickle.”

This was followed up on Friday, after another poll showed her down 11 percentage points in Iowa forced Hillary Clinton to concede to supporters that she was likely to lose both Iowa and New Hampshire, with CNN’s Wolf Blitzer, the neoliberal former propagandist for the America Israel Public Affairs Committtee who now serves as CNN’s Washington bureau chief asking her if she “believes the American people are ready to elect a socialist as president of the United States?” Clinton responds to this spoon-fed question with a stern look saying, “I know a number of Democrats, people who I highly respect are concerned and are expressing that concern to me, to journalists and others…”

The Clintons’ fingers are all over this McCarthyite attack. It’s exactly the kind of thing Bill and Hillary pulled when they went after Barack Obama after he won the Iowa caucus in 2008, and sparked the epic collapse of Hillary Clinton’s first time out as the “inevitable” Democratic nominee for president that year. Now they’re trying the same smear tactic on Sanders, and for the same reason.

This time they will fail because Americans are no longer spooked about the idea of socialism, much less of the label. In fact, a poll taken a week ago In Iowa found that a plurality of likely Iowa Democratic caucus-goers, asked to identify themselves as either “capitalists” or as “socialists,” chose “socialist.” Meanwhile, asked the same question in the last debate, Hillary Clinton proudly declared herself to be a “capitalist.”

That uncharacteristic flash of Clinton honesty was correct; she and Bill have pursued money aggressively since leaving office, with an alacrity that would be the envy of many a hedge-fund manager. In fact a fair amount of Hillary’s time as Obama’s first Secretary of State was devoted to currying favor with particularly sordid but filthy rich foreign autocrats and poobahs who then contributed significant sums to the coffers of the Clinton Foundation — a giant money-laundering operation that provides salaries and perks to the two Clintons, their daughter, and various acolytes. It’s an industry and it generates capital — a lot of capital — making her indeed a capitalist. Sanders, in contrast, is one of the poorest members of Congress, who has pointedly not used his 18 years in Washington to enrich himself through bribes and campaign “contributions” from wealthy contributors.

Besides, red-baiting won’t work because nobody’s afraid of a world communist conspiracy anymore. Russia is capitalist, China is capitalist, Vietnam is capitalist, the US has recognized Cuba. For that matter, Vladimir Putin, despite his origins as an operative in the old Soviet-era KGB, has become a hero of the right wing in the US, and is seen by many — perhaps even most Americans — as a better, more focused and decisive leader than President Obama.

Calling someone a red or a Commie or a pinko in today’s America is akin to using Shakespearean invective to denounce someone; It’s as if Hillary had called Bernie “a lily-livered, action-taking, whoreson, glass-gazing, super-serviceable, finical rogue,” as Kent said of Oswald in Shakespeare’s King Lear. It just sounds absurd.

Sanders, of course, has courted this through his political career by openly declaring himself to be a “democratic socialist.” When he started out doing it in Vermont, a state which, while loaded with immigrant hippies, is also home to many of the same rock-ribbed conservatives who populate the little towns of the neighboring Granite State of “Live Free or Die” New Hampshire, he took his lumps for it, but he didn’t back down. Instead, he ended up, serving as the socialist mayor of what pundits took to calling the “People’s Republic of Burlington,” moving on to become the socialist Congressman from Vermont, and later the socialist Senator from Vermont.

He’s just educating a larger national audience now, and since his ideology comes with a heavy dose of denunciation of Wall Street’s bankster crooks and of corrupt Washington politicians like his opponent, Hillary Clinton — people who are on the take from those same crooks and other corporate scoundrels — he’s getting a rousing reception from the electorate.

Clinton, desperate to win and seeing her last shot at the presidency withering away, has hit bottom with this red-baiting effort. Initially, as it became clear that her candidacy was foundering, she turned to lies, having her daughter Chelsea Clinton claim a week ago that Sanders’ plan for a universal single-payer Medicare-for-All healthcare program in the US would mean “dismantling Obamacare, dismantling Medicaid, and dismantling CHIP,” the insurance program that covers some poor children around the country, and by claiming Sanders had voted for a bill to deregulate derivatives (it was part of a budget bill, and was voted on by all but four members of Congress, besides which the new head of the unregulated commodities trading organization, Gary Gensler, is now the financial director of Hillary Clinton’s own campaign!).

Now, lying having failed, she’s gone completely off the rails by turning to Sen. Joe McCarthy for inspiration.

Perhaps we should recall and repurpose Joseph Nye Welch’s devastating condemnation of Sen. McCarthy when the senator red-baited a young law colleague of Welch’s who had for a time as a student at Harvard Law School been a member of the National Lawyers Guild, an organization McCarthy had labeled a “Communist front” organization. Welch responded to the red-baiting smear saying, “Have you no sense of decency, sir, at long last? Have you left no sense of decency?”

Enough said! Let’s leave this sorry story of Hillary Clinton’s desperate resurrection of McCarthyism with an insult borrowed from Shakespeare’s Comedy of Errors<.em>:

“Dissembling harlot, thou art false in all!“