London — In a rational world where the rules of arithmetic apply it just doesn’t add up to declare that 40,000 is mathematically more significant than 500,000.

But in the fact-free world of Donald Trump 40,000 counts more than 500,000…at least that is Republican Trump’s new math as it applies to people in the United Kingdom. 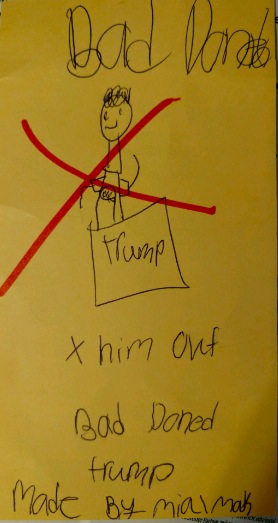 Bad Trump (this incisive drawing was contributed to ThisCantBeHappening by two young artists, Amelia, 5, and Makayla, 8)

Over 500,000 Brits have signed a petition to ban Trump from entering the U.K. because of his hateful declarations, particularly his call to ban Muslims from entering the United States. That ban-Trump petition had 577,023 signatures as of Jan. 20 -– a figure that keeps increasing.

Yet, typical of Trump, he saw more significance in the 40,000-plus British signatures on a petition opposing any blocking of his entry.

Trump insisted he has “many more fans than naysayers” across the U.K. when he responded to a British reporter at a campaign stop in Iowa hours after the U.K.’s Parliament concluded it’s Monday January 18th debate on those ban/no-ban petitions.

And in The Donald’s fact-free world it never computed in his mind that the Parliamentary debate began with an announcement that 30,000 of the 42,898 signatures on the don’t-ban-Trump petition had been removed because there was serious suspicion that those 30,000 signatures were not valid. That announcement in Parliament about removal of the questioned signatures stated those deleted signatures appeared to have originated from a single source.

Of course The Donald probably sees the ban-him petition as being trumped by British poll results stating 24 percent of Brits support his ban Muslim entry idea.

Trump saw big pluses in the Parliament debate about him despite the unflattering descriptions of him which were a core feature of that debate. These included members of parliament calling Trump as a buffoon, corrosive, an idiot, poisonous and a xenophobe, all appellations that flowed from both supporters and opponents of the ban petition.

Trump told the British reporter in Iowa that he saw it as a “great honor” to have ben the focus of a Parliament debate. Trump told that reporter that he was “very happy” with what happened in Parliament – presumably what didn’t happen: significant support for the ban.

Parliament took no official action on the ban or not-ban petitions because the authority in the U.K. to ban entry rests not with Parliament but with the the U.K. Home Secretary — the equivalent of the US Secretary of the Interior. The ban Trump petition has garnered more signatures than any public petition sent to Parliament it was announced during the debate.

Even the U.K’s ruling conservative government voiced opposition to Trump’s ban-Muslims posture. The U.K. government’s official statement, read into the record during that Parliament debate, stated in part: “The Prime Minister has made clear that he completely disagrees with Donald Trump’s remarks. The Home Secretary has said that Donald Trump’s remarks in relation to Muslims are divisive, unhelpful and wrong.”

While U.K Prime Minister David Cameron proclaimed opposition to Trump’s remarks he quickly displayed a Trump-like penchant for sticking his foot deeply into his mouths.

Cameron claimed non-English speakers could be more susceptible to extremism. Critics of Cameron’s posture on non-English-speaking triggering extremism, which includes many Muslim members of Parliament, charged that Cameron’s contention has no factual basis.

Interestingly, Cameron did not deem it necessary to mandate English proficiency for persons from Poland – now the nation second only to India claimed as home by foreign-born residents in the United Kingdom. The U.K.’s latest census lists Polish as becoming the nation’s 2nd most widely spoken language after English.

While name-calling during the debate garnered prominent news coverage interesting nuance around realpolitik and pragmatism was overlooked. Ban Trump opponents and supporters noted the prospects of misperceptions that the debate was an attack on America and/or the debate backfiring by helping Trump’s election bid by him being cast as a victim of outsider interference. Trump’s investments in the U.K. that could be reduced impacting economies in fragile communities near his golf courses in Scotland also received note. Trump threatened to withdraw investments if banned.

While many referenced free speech protections other members of Parliament not that free speech is not an unconditional right to spew hatred.

During that debate on Trump in Parliament, speakers noted that terrorists have killed more Muslims than members of any other religion. A speaker also noted that if Trump institutes his ban on Muslims if elected president, the leading candidate in London’s mayoral race on May 5, 2016, liberal Sadiq Khan, a Muslim, could be denied entry if he tried to travel to the United States.

One liberal Member of Parliament who declared strong opposition to Trump’s anti-Muslim rhetoric cited religious reasons for opposing the petition to ban Trump.

Naz Shah, a Muslim, said Islam teaches that goodness is better than evil and if someone does bad, you should do good in return. Shad, who called Trump a demagogue, said, “hatred breeds hate and that is not something I will tolerate.”