Sixty-six years ago, on August 6, 1945, the United States government dropped the nuclear bomb on Hiroshima and murdered 150,000 human beings in an instant. An equal number have since been murdered by after affects of this Weapon of Mass Destruction (WMD). Three days later it was Nagasaki’s time.

Since the Second World War, the US has invaded 66 countries, under various pretexts, a total of 160 times (See Permanent War) –murdering, handicapping and torturing millions.

Today, the Lockheed Martin Valley Forge facility in Philadelphia–built in the very locale revered for that great battle for freedom, liberation and sovereignty which birthed this Land of Opportunities–produces WMD. It is part of the government-private industry nexus that has killed a million or so in Iraq and Afghanistan–nations where there is a lot of oil and crucial transportation routes–all so that the wealthy get richer, and then even more rich as they don’t have to pay taxes in the good ole’ US of A.

There they stood: 30 human beings. A young couple with babe-in-arms stood out among the mostly gray folks. They bore signs of the usual kind, hoping some would heed their cry for species survival. They recalled 66 years ago when “people ran to the rivers to escape, and soon the rivers became…a stream of drifting dead bodies…” and “birds ignited in air.”

As they read their cry for peace in collective voice, a dozen uniformed armed men stood by their police and security cars ready to protect American Private Property.

Family shoppers drove by. Some drivers honked in accord with the activists; others barked vulgarities.

A bringer of peace cried out: “Lockheed Martin is built on the social acceptance of a permanent war economy, and a supreme belief in the dominance of United States markets and interests around the world. That’s empire, and empire means endless war and the threat of war.”

Demonstrators strapped tape between two poles on either side of the war criminal company entrance admonishing: “Crime Scene! Do Not Cross!”

A dozen peaceniks of old and new threw sunflower seeds–the international symbol of a world free of nuclear weapons–at the war criminal’s entrance sign and crossed onto its property. A dozen war criminal collaborators (“Hey, we’re just feeding our families”) placed the aberrant criers for peace under arrest. Gently. These two sides on the coin of war and peace have been doing this same thing for a decade here, and even longer in other places of the American Empire.

Another dozen anti-war activists watched this ritual unfold as we tolled the bell for peace 66 times. Some then drove to the police station to pick up those arrested. They would be citied for trespassing and receive a $115 fine by the township charged with protecting warmaker’s private property. Some of these folk have a drawer full of citations and also of threatening letters warning of re-arrest for failure to pay. Most ignore them and the township seems to forget about it all, in the hope that others of our species beyond the King of Prussia mall don’t get to know that there are a few sane and courageous people in this land led by insane and cowardly war criminals.

My first trip back to good ole’ US of A since having sworn never to return after 9/11 drove the injun/muslim hunting cowboys totally beserk. I fight these war criminals from other continents. ThisCantBeHappening! founder Dave Lindorff convinced me, though, to make the sojourn back to the land of sulfer. A staff reunion of the muckraking Los Angeles Vanguard from the good ‘ole 1970s lured me. 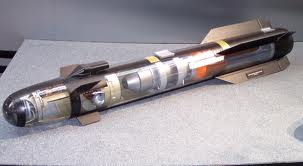 The Hellfire missile made by Lockheed Martin, fired by U.S. Drones into Pakistani homes, have killed hundreds of civilians

Now, a wanderer in this alien land of an accidental birth, I was one peace activist who chose not to get arrested. I had no national address and had pending anti-war obligations in other countries.

I wiped away tears for the tortured that welled up all on their own, and walked over to a security guard. I sought his view so as to inform others of our species.

“I can’t say nothing, sir,” he replied curtly.

I thought of what a crier for peace had just quoted from Thomas Merton:

“Few are guilty; all are responsible.”

(Across the country, Hiroshima Day was remembered and so Nagasaki Day will be on August 9. In Philadelphia, the Brandywine Peace Community demo is at Market Street Bridge, 7:30 p.m. Brandywinepeace.com )

RON RIDENOUR, who was a co-founder and editor with Dave Lindorff in 1976 of the Los Angeles Vanguard, lives in Denmark. A veteran journalist who has reported in the US and from Venezuela, Cuba and Central America, he has written Cuba at the Crossroads, Backfire: The CIA’s Biggest Burn, and Yankee Sandinistas. For more information about Ron and his writing, go to:RonRidenour.com