When she opened the letter and saw it was a $1,471 bill for her recent visit to a hospital emergency room – a visit that lasted around four hours from admission to discharge –- she got sick.

That bill itself made her physically sick: triggering an intense headache, upsetting her stomach and leaving her with an overall queasy feeling.

It arrived in the mail weeks after she had received a copy of the whopping $14,000+ bill submitted by the hospital to her medical insurance company by the hospital in New Jersey where that ER visit had occurred.

Her medical insurance covered that initial $14,000 bill in full. But now she was supposed to cough up the $1,471 herself.

Now that additional $1,471 bill was making her emotionally sick: a sickening anger that compounded her being sick-and-tired of being sick-and-tired about outrageous medical care costs that surgically dig deeper into her pocketbook seeking to excise more money beyond what she pays monthly for the medical insurance coverage through her spouse’s employer.

It didn’t help that the four-hour stay she was still being billed for had not resulted in the hospital’s ER staff making a determination of the cause of her medical issue or offering a course of care.

These bills –- for $14,000+ and $1,471 — are vivid examples of the acute toxicity coursing through the veins of America’s bloated profit-based health care system.

The United States has the world’s costliest health care system on both a per-capita and a share-of-GDP basis, exceeding comparable costs in all other advanced nations including Britain, France and Canada.

However, that high cost does not produce high performance –- a sickening outcome.

The performance of America’s health care system is alarmingly poor. America ranked a mere 37th among 191 countries rated by the World Health Organization on issues from access to infant mortality to longevity.

A stark indicator of the poor performance of America’s high-cost health care system is the chilling reality that America has the lowest life expectancy of thirteen high-income countries such as France and Britain. 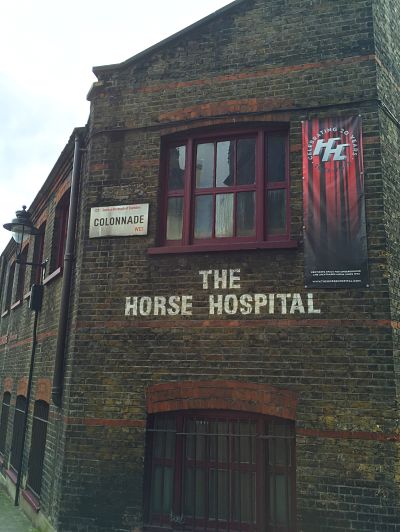 The Horse Hospital, built in 1797 for horse care, is now an arts venue in London, capital of Britain. LBW Photo

For too many Americans, the health care system in their First World nation – a system that brims with extraordinary medical advances for those who can afford it or have the right insurance coverage -– has a Third World aspect to it because high costs block access to needed care for too many.

Health care costs in America are so high that over a third of all Americans do not seek a doctor’s help when sick and do not fill prescriptions as prescribed, according to a report released in October 2015 by the Commonwealth Fund.
High medical care costs are the cause of over half of the personal bankruptcies in America. Worse yet, most persons bankrupted had medical insurance — insurance that just didn’t pay enough of the costs of care. A January 2016 item on the American Journal of Medicine blog noted how medical bankruptcies continue “even under” the federal Affordable Care Act, commonly known as Obamacare.

What’s really ‘sick’ is that actions required to cure the many fundamental problems in America’s health system are treated as side issues in the bitter partisan wrangling around reform of the health care system. Too many elected officials, particularly conservatives, are more interested in preserving health care industry profits than providing affordable care for the voters who elected them. (And why would most elected officials care? They have a gold-plated health plans, paid by tax dollars, for themselves and their families.)

That $1,471 bill this woman received was from a healthcare financial services company in an Ohio city located 425-miles west of the five-year-old hospital in an upscale South Jersey suburb outside Philadelphia where she sought ER treatment. She went to this hospital over thirty-miles from her Jersey home because the two hospitals nearest her home are not noted for quality care.

She sought an emergency room visit late on a Saturday afternoon because of severe pains in her chest that had persisted for days. Since it was a Saturday afternoon, the office of her regular doctor was closed. And since she was having those persistent chest pains, prudence dictated medical attention sooner rather than later to avoid more serious medical complications –- like a heart attack.

That $1,471 bill listed a $1,384 charge for “Emergency Dept Visit” and an $87 charge for an “Electrocardiogram Report.” Those charges raise the obvious question of why weren’t they included in that $14,000+ bill issued for the same Emergency Department visit? Is that $1,471 bill a surgical assault on her pocketbook by that hospital? It certainly is an insult.

During that four-hour hospital visit the majority of her ER time was spent in a curtained area, lying in a bed.

An ER doctor confided that he is required to order many tests for “defensive reasons.” The battery of tests she received that increased the cost of her ER visit were given primarily to decrease the possibility of malpractice lawsuits and/or fines from governmental regulators for not performing all that could be done…with “could be done” being different from what “should be done.”

For example, she was given two blood tests, the second test administered despite the first test revealing no abnormalities. Since that second blood test merely repeated that first blood test, her insurance company refused to pay for the second test, resulting in her receiving a $175 bill, a bill she had to pay.

And, oh, there was the $100 co-pay payment she had to cough up for the ER visit, as required by her medical insurance plan.

One critical escalator of health care costs, according to consistent studies, is the money spent on administration.

But, get this: despite that hospital charging $14,000+ for her ER visit, that hospital failed to send records from that ER visit to her doctor as she requested.

During her ER admission, she provided the name, address and telephone number of her doctor, yet the hospital did not send the ER visit records. The administration at the hospital that cost nearly half a billion dollars to build a few years ago failed to transmit a few pages of test results to her doctor.

In fact, ER staff asked her where the hospital should send her records – not once but a couple of times. When she was informed that her doctor had not received the records (weeks after that ER visit) she called the hospital where a hospital employee haughtily told her she needed to fill out some forms to get the ER records sent to her doctor before that employee discourteously hung up the telephone.

When she discussed that sickening, expensive ER experience with her doctor, the doctor referenced a reality curtly dismissed by those hell-bent on killing Obamacare without having a lower cost replacement like the universal care that exists in other advanced nations.

He said that since high health care costs drive people away from needed medical treatment, within a decade, untreated illnesses would soar tremendously across America resulting in an even more sickly society with even higher health care costs.