The Boston Marathon bombing has already demonstrated the best and the worst of America for all the world to see.

First, let’s talk about the best. When the bombs detonated, despite the shock and the horror of the blown-off legs and arms, and the blood on street and sidewalk, and without knowing what else might be coming, ordinary citizens jumped into action to try and help the gravely wounded and the dying. Average people with no experience in this kind of mayhem stepped up without hesitation to care for strangers, applying tourniquets, carrying people who couldn’t walk to hospital tents, or just holding a hand and calling for help.

People pored over their cellphone photo records and camera files, looking for photos that could help identify the killers. Without their volunteer actions, the police and federal agencies would have had no clue who they were looking for. With them, it was quick work pinpointing and identifying the two men who appear to have placed the two bombs.

Later, while police failed to catch one of the brothers suspected of having been a bomber, despite placing all of metropolitan Boston under a kind of martial law, it was a citizen who, after the so-called “lock-down” of the city had been lifted, spotted the suspect and alerted police.

Now for the worst.

Let’s start with the martial law. Okay, it wasn’t a declaration, but with police and the Mayor ordering everyone in Boston and its suburbs to stay inside and lock their doors, “answering only to police,” it was virtually the same thing. 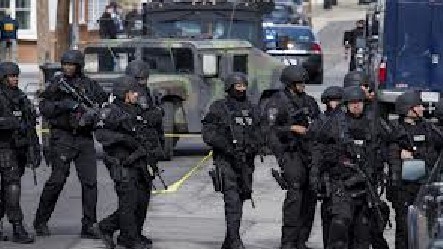 Boston under state of siege: a preview of martial law?

Cops, FBI, ATF and DEA agents were everywhere, and the streets were being patrolled too by National Guard troops and armored personnel carriers equipped with machine guns — this in pursuit of a single wounded 19-year-old on the run on foot! Talk about overkill. We’re lucky that police in this amped up man-hunt didn’t gun down anyone who might have been unaware of the “stay-inside” order, or who decided he or she needed a beer or an ice-cream and ventured outside. Look what the LAPD did to the Latina mother and daughter newspaper delivery team when they thought the pick-up they were driving was the truck of the rogue cop they were hunting — peppering it from behind without warning with over a hundred shots from pistols and automatic rifles. (As it is, the several cops who responded to the 911 call about a man hiding in a boat nearly blew away the chance to question him about his motive by mindlessly blasting away at him though he was pinned down inside the boat, until a federal agent ordered them to quit firing.)

The argument that the lock-down might have spared people from being shot by the fleeing Dzhokhar Tsarnaev is absurd. Considered armed and dangerous, he might, instead of slipping inside a canvas-covered boat, have broken into a home and taken a family hostage. In fact, arguably had people been out and about, Tsarnaev would probably never have managed to escape unnoticed on foot from the 20-block perimeter police had established around the scene of the initial shootout in Watertown. People would have noticed him wounded and running. Instead, they were all huddled inside their locked homes.

Worse is the precedent that was just set. Now when police have a “situation” anywhere in the country, it’s a good bet they’ll adopt the new Boston model as the option of choice, “locking down” (note that this is a prison term used to describe the tactic of locking all prisoners in their cells during disturbances — a pretty unsavory concept to apply to a community in a supposedly free society) whole towns or cities to give police a free hand.

Because Bostonians had been suitably frightened by the breathless coverage of the manhunt for the Tsarnaev brothers, people were, at least for the relatively short time the “lock-down” was in effect, willing to obey orders and stay inside, but had Dzhokhar not been found so quickly, and had authorities decided to extend the de facto martial law, it would have been illuminating to see how police would have responded to those people who did get tired of being cooped up and decided to go outside and run some errands, or go visit friends. Would they have been harassed? Probably. Arrested and taken in? Maybe. There were reports of people who stuck their heads out of doors being “yelled at” by police and “ordered” back inside.

And then we have the federal government’s response since Tsarnaev’s capture. The White House and Justice Department have announced that he will not be read his Miranda warning, which tells those who are arrested for a crime that they have the right not to answer questions from police, and the right to an attorney. Miranda warnings, the Supreme Court has long ruled, are an important part of upholding the intent of the Fifth Amendment which protects everyone in this country against being compelled to testify against themselves — one of the main grievances that led the colonists to fight to throw off British rule.

President Obama, by secret executive order two years ago, gutted that protection, saying that it would be okay to ignore the Miranda warning in the case of suspected terrorists. Will the seriously injured Tsarnaev be subjected to torture to get him to tell police whether he had any confederates beside his dead brother? We don’t know. The government has reserved the right to use coercive measures against alleged “terrorists” (even though experts have warned that statements obtained under torture are notoriously unreliable).

Note that the gutting of the Miranda rule for terrorists was not a court ruling. Nor was it a change in the Constitution. It was simply a presidential executive order. It and countless others are secret; we only know about that one because it was leaked.

We don’t know that Dzhokhar Tsarnaev is a terrorist, unless you are of the view that any whack-job who kills a bunch of people is a terrorist. As far as we know, he was no different from Jared Lee Loughner, the guy who fired into a crowd of people coming to meet Rep. Gabrielle Giffords in Arizona, killing 6 and seriously wounding 13, including the congresswoman herself, or from James Holmes, who slaughtered 14 people in a Colorado movie theater. Mass murderers, yes. But terrorists? I don’t think so, if the word is to have any meaning.

Fascists like Sens. Lindsay Graham (R-SC) and John McCain (R-AZ) are calling for the US to forget the Constitution altogether, and to declare American citizen Tsarnaev an “enemy combatant,” thus depriving him of the right even to a trial, forget the Miranda thing. They want him run through some kangaroo military tribunal and then executed.

What’s happening is that US the government, and a disturbingly large segment of the American public, is losing patience with the wheels of justice in a free society. We’ve entered an Alice in Wonderland world where what is wanted is “sentence first, verdict later,” and where the trial part, with its presumption of innocence and its jury of peers, is either for show, or is simply left out entirely. (Remember, they have trials in China, Cuba, and even Myanmar, but they certainly don’t have justice.)

The thing is, if the only time we adhere to the concept of “innocent until proven guilty,” and the only time we require police to follow the Miranda procedure of advising those they arrest of their right to remain silent until they have an attorney is in cases like traffic violations and petty crimes, but we ignore those protections when it really matters, in the case of serious crimes, then we no longer have those critical protections against tyranny.

At that point, we are in a police state.

What we are seeing in Boston is a preview of that police state — a kind of “coming attractions” look at it. The mindless post-capture applause for the army of police who implemented the “lock-down” of the city after the marathon bombing was part and parcel of that police state.

Someday, those cheering images will make a great clip in some Leni Riefenstahl-style propaganda film glorifying whoever is the current maximum leader of the American dictatorship.