Occupy activist Cecily McMillan, convicted on May 5 of second-degree felony assault of a New York cop whom she and witnesses claimed had grabbed her breast from behind, bruising it, stood her ground before her sentence was rendered, refusing the judge’s insistence that she should “take responsibility for her conduct.”

Risking the possibility that Judge Ronald Zwiebel might sentence her to the maximum seven years for the charge she was convicted of, McMillan would only apologize for what she termed “the accident” of involuntarily throwing back her elbow when grabbed by behind from someone she could not even see (the cop was also in plainclothes, so even if she had seen him she would have been justified in protecting herself). Insisting to the judge that she lived in accordance to the “law of love,” she said, in her pre-sentencing statement, “Violence is not permitted. This being the law that I live by, I can say with certainty that I am innocent of the crime I have been convicted of… I cannot confess to a crime that I did not commit. I cannot throw away my dignity in return for my freedom.”

It was a bold and risky stand for the 25-year-old New School for Social Research graduate student to take, given the high sentencing stakes. In the end, though, the judge, — who during the trial had blocked her defense from presenting key evidence that she had acted in her own defense against being groped by a cop (for example the police officer’s record of brutality and corruption), while allowing the prosecution to present evidence and statements normally not considered permissible in a trial (such as presenting to the jury evidence about an arrest of McMillan that had not yet been tried or adjudicated) — sentenced her to only a short term in jail.

She still has a five-year felony probationary sentence, which leaves her a convicted felon, a serious impediment to employment, and one that could leave her subject to limitations on her freedom of movement for five years.

McMillan’s many supporters nonetheless hailed the short sentence, which could see her released in as little as 60 days, as a victory, one which many attributed to the massive outpouring of support she has received since her arrest, during her trial, and since especially since her conviction. That support has included a jailhouse visit by two members of Pussy Riot, who condemned her conviction and jailing, a letter of of support from the president of the New School, support from five members of the New York City Council (but so far not a word from New York City’s supposedly leftist and former activist Mayor Bill De Blasio), an online petition signed by over 167,000 people, and an unusual letter from nine of the 12 jurors in her case calling on the judge not to sentence her to any jail time. 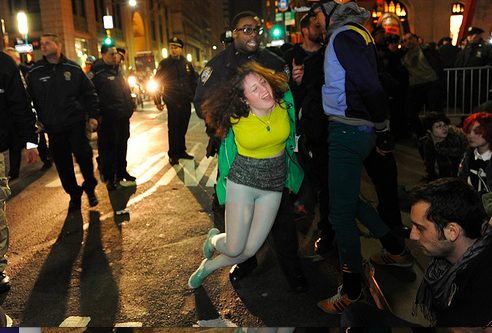 McMillan’s attorney Martin Stolar, said he was “relieved” that her sentence was not two years, but also said that he had appealed the conviction to the state’s Court of Appeal.

Stolar earlier complained about Judge Zwiebel’s sending a woman with no prior convictions to sit in jail on Rikers Island for two weeks while awaiting her sentencing hearing, without even granting the possibility of her posting bail. It was a complaint that is likely to be also made about the judge’s action in sending her back to Rikers while her case is on appeal. This treatment stands in stark contrast to the way the New York courts typically handle cases involving Wall Street criminals convicted of felonies, who are routinely allowed to walk out of court after conviction and even after being sentenced to lengthy jail terms to live in freedom during the long months that their cases are on appeal.

Zwiebel agreed with the position of Manhattan District Attorney Cyrus Vance, Jr.’s prosecutor on this case that a sentence was needed to send a message to protesters, saying, in pronouncing his sentence, “A civilized society must not allow an assault to be permitted under the guise of civil disobedience.”

But McMillan’s supporters appear not to have learned that “lesson.” In a statement released by JusticeforCecily.com, they said: “We all know Cecily did not receive a fair trial, and this case will be fought in the Court of Appeals. The DA and the courts want to make an example of Cecily — to deter us, to scare us, to keep us out of the streets. And we won’t let that happen. This ruling will not deter us, it will strengthen our resolve.”