In this edition of Progressive Radio Network’s “ThisCantBeHappening” radio program, host Dave Lindorff, focuses on the case of Occupy Movement activist Cecily McMillan, currently jailed at Riker’s Island without bail while awaiting sentencing on a conviction of felony assault of a police officer.

With a sentencing hearing set for next Tuesday which could result in a jail term of up to seven years, Lindorff discusses this case with McMillan’s attorney, Martin Stolar, and Lucy Parks, a member of her support team at JusticeforCecily.com. Stolar explains how the New York state judge hearing the case prevented McMillan’s defense from making their case to the jury that she had not assaulted police officer, but had in fact been the victim of assault when the officer grabbed her right breast from behind her, causing her instinctively to throw up her arms, hitting him in the eye with an elbow.

Both Stolar and Parks say the heavy charge of assault against a police officer leveled against McMillan by Manhattan District Attorney Cyrus Vance, Jr.,, and the Judge’s blatantly prejudicial handling of the case, including his refusal to grant bail pending the sentencing hearing, demonstrate that it’s really all about sending a message that protest in New York City, especially against the banking industry, won’t be tolerated.

To hear a podcast of this program, which aired on PRN.fm on May 14, click here or on the photo of Cecily McMillan below. 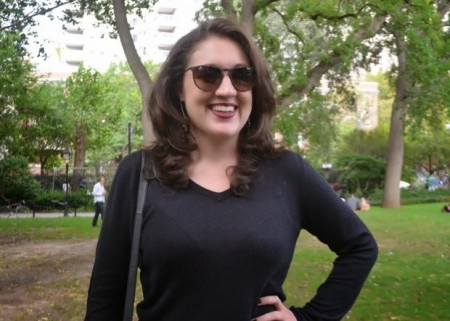 Jailed Occupy activist Cecily McMillan, convicted in a biased courtroom of assault on a police officer, faces a possible 7-year sentence at a hearing this coming Tuesday. For information on attending and protesting this travesty of justice, go to JusticeforCecily.com

Meanwhile, TCBH! readers should read the first statement from this courageous and inspirational woman, made from her Riker’s Island holding cell, and published in Cecily’s Statement from Rikers:

Good morning. I’m writing from the Rose M. Singer Correctional Facility, dorm 2 East B on Rikers Island – where I’ve been held for the past 4 days.

Admittedly, I was shocked by the jury’s verdict on Monday, but was not surprised by the events that followed. An overreaching prosecutor plus a biased judge logically adds up to my being remanded to Rikers.

I was prepared then, as I am now, to stand by my convictions and face the consequences of my actions – namely that of refusing to forsake my values and what I know to be true in exchange for my “freedom.”

Packed into a room with 45 other women – often restricted to my cot – I’ve had nothing but time to measure the strength of my beliefs alongside that ambiguous concept – “freedom.” (I’ve come to the conclusion that it is far easier to weigh such tradeoffs from the comfort of one’s own bed.)

At Rikers, the day begins with 4:30am breakfast. Milk cartons in hand, the women echo a common set of concerns – “can’t reach my lawyer, my family won’t speak to me, no commissary” – and I become painfully aware of how privileged I am, despite what is supposed to be the great equalizing suffering of the prison experience.

Unlike my peers, I have a hell of a lawyer – Marty Stolar – who made the long journey to hold my hand and promise “I will not stop fighting for you.” I also have a gifted team of friends and organizers – #‎Justice4Cecily – that continue to provide around-the-clock care and mobilize public support. Finally, I’m incredibly lucky to have a vast and very much alive movement at my side, sending me “Occupy Love” from across the world.

Despite how obscenely unbalanced our circumstances are, my new-found friends – who have quickly become my comrades – are outraged by my story and resolve to do their part to keep me out of prison. After lunch, they spend their free time writing letters to Judge Zweibel, defending my character and pleading for leniency.

At 6:00pm dinner, the cramped circle of ladies ask me “What exactly is social justice organizing?” Over the complex choreography of food trading I tell them about Democratic Socialist leader Eugene Victor Debs. How nearly 100 years ago he publicly criticized U.S. involvement in WWI – in violation of the Wartime Sedition Act – and was sentenced to 10 years in prison for exercising his constitutional right to free speech. “Sort of like that,” I explain, “But he’s way out of my league – he’s my hero.”

By lights out, a subtle peace has begun to wash over me. I page through a book stopping at Debs’ speech to the Federal Court of Cleveland, Ohio – I read and reread, as if a personal mantra, these opening lines –

At the close of the night, I smile and shut my eyes. As I drift off, “Somehow,” I think, “this is all a part of the plan.”