Repeated lies and law-breaking forced the 1974 resignation of then U.S. President Richard M. Nixon, leading to Nixon’s subsequent, and continued inclusion on the list of the “Worst Presidents” in American history.

Despite Richard Nixon, a Republican, being widely denounced, legions of legislators nation-wide still maintain lockstep support for the debacle he unleashed in June 1971 known as the “War on Drugs,” a war that since 9-11 has increasingly come to resemble a real war, with military-clad SWAT teams raiding homes with assault rifles and grenades, arriving in military surplus armored vehicles, and ignoring such niceties as serving of warrants or reading of Miranda rights.

Legislators – Republican and Democrat – continue backing Nixon’s anti-drug onslaught, and especially its attacks against cannabis users, despite Nixon’s own lies and criminal behavior.

Nixon’s ‘War on Weed’ is a case study of malicious subversion of the democratic process, and comprises a compendium of legal and ethical violations that should spark outrage among even the most ardent Drug Warriors on Capitol Hill and beyond who persistently posture themselves as forceful proponents of the rule-of-law., and often of libertarian concern for personal freedom and privacy.

The recent overwhelming voter approval of a referendum in Washington, DC legalizing marijuana for adult use presents a critical test for the now Republican-controlled Congress.

Will Congress continue to support the flawed ‘War on Weed’ initiated by the reviled Nixon or will it support the majority of DC residents who approved the legalization measure?

Nixon and the cynical and wrong-headed Drug War he launched

Congress, which has approval authority over DC laws, has the power to uphold, delay or derail the DC referendum that voters approved by a 64 percent-plus margin.

During the November 4th elections, DC, along with Alaska and Oregon, approved legalization of marijuana. Those jurisdictions join Colorado and Washington state, where voters already approved adult, non-medical use of marijuana in 2012. Voter approvals in the four states repudiate pot prohibition that has, since 1971, squandered billions of dollars and ruined millions of lives, simply to suppress a substance that even Nixon acknowledged is not dangerous.

The serial misconduct that produced the impeachment and resignation of Nixon, the only president in U.S. history to resign, is abundantly evident in Nixon’s ‘War on Weed’ – initiated largely because Nixon at least claimed he saw marijuana as an element in a plot by Communists and activists (anti-Vietnam War and minority rights) to destroy America.

Nixon launched his ‘War on Weed’ before the conclusion of an extensive examination of the herbal substance by a commission Congress had created when that body approved the Comprehensive Drug Abuse and Control Act of 1970.

If Nixon had followed legal procedures and adhered to the intent of Congress, he would have at least waited for the release of the commission’s report before taking action on the very subject of that commission’s examination. But, bending the law for political gain — in this case appearing to be “tough on crime,” was a core part of Nixon’s modus operandi.

Nixon had appointed a majority of that 13-member study commission. The only members not appointed by the man known as Tricky Dick, were two U.S. Senators and two Congressmen (two Republicans and two Democrats). Nixon stacked his deck of appointees with Drug Warriors including the commission’s chair, a former federal prosecutor and Republican governor of Pennsylvania, Raymond Shafer.

But when Nixon got wind that this commission was leaning away from his staunch pot prohibition position, he stepped in and tried to pressure Shafer to “keep your commission in line.”

At one point Nixon strenuously urged Shafer to lie in the commission’s report, according to transcripts of Oval Office conversations which Nixon had secretly tape recorded. “I think there’s a need to come out with a report that is totally oblivious to some obvious differences between marijuana and other drugs,” Nixon told Shafer on those tapes. “There are differences…” 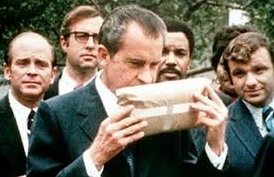 Shafer’s refusal to lie for Nixon cost him a federal judgeship that Nixon had promised him in return for his heading the commission.

That National Commission on Marijuana and Drug Abuse, commonly known as the Shafer Commission, released its extensive report in March 1972. It called, to Nixon’s dismay, for a decriminalization of marijuana and for the removal of cannabis from the most restrictive federal drug ranking – Schedule 1 – where it had been placed temporarily by the 1970 Drug Control Act pending results of the Commission’s examination.

Instead of Nixon following the findings and recommendations of that congressionally mandated study commission, an infuriated president rejected the report of his own commission and ramped up his ‘War on Weed.’ The 445,000 arrests for marijuana offenses in 1974 – the year Nixon resigned – were over 150,000 more than the arrest figure for 1972. Embedded in that 1974 pot arrest figure is the fact that 81 percent of those captured in the ‘War on Weed’ did not have prior criminal records. Between 1972 and 2000, police arrested over 13 million Americans for marijuana offenses – most of these arrests being for simple possession – according to statistics compiled by the FBI.

America’s socio-political insanity on marijuana, fanned by Nixon but existing since the early decades of the 20th Century, is evident in the push-pull on pot in Alaska.

In 1975, the Alaska Supreme Court, ruled that a privacy right in that state’s constitution allowed the “possession and ingestion of substances such as marijuana in a purely personal, non-commercial context in the home…”

“…the effects of marijuana on the individual are not serious enough to justify widespread concern, at least as compared with the far more dangerous effects of alcohol, barbiturates and amphetamines.”

That Ravin ruling cited numerous findings of the Shafer Commission like the findings that marijuana does not cause criminal or violent behavior, that there is “little validity” to the claim that pot use leads to the use of more potent drugs and there is “no significant physical, biochemical, or mental abnormalities” from the long-term use of marijuana.

That Ravin ruling however did not transform Alaska into a land of stoners who became the major suppliers of pot to all of the lower 48 states, as critics had been direly warning.

Yet, some in Alaska nonetheless felt it was wrong or embarrassing that their state was the only one in the nation to allow adult possession of four ounces of marijuana in the home. In 1990 an anti-pot-possession crusade in Alaska, led by a 69-year-old retired schoolteacher, produced a ballot initiative recriminalizing marijuana possession. The Alaska Court of Appeals voided that ballot initiative in 2003. The recent vote legalizing adult possession in Alaska takes the state beyond the Ravin ruling.

Curiously, Richard Nixon, during his June 17, 1971 “Special Message to Congress on Drug Abuse and Control” which launched his Drug War, focused primarily on heroin addiction, making only one passing mention of marijuana. Nixon did not specifically cite pot as a particular problem driving the “national emergency” he claimed to see in drugs.

The demons of Richard Nixon’s ‘War on Weed’ still ravage the American landscape.

The Obama White House, for example, claims to favor moderation in federal pot law enforcement. Yet the federal Drug Enforcement Administration and federal prosecutors around America continue to crack down fiercely on cannabis. The DEA continues to raid pot businesses in California where medical use is legal and in Colorado where adult non-medical use is legal. Federal prosecutors in Philadelphia have convicted anti-prohibition activists and tried to crush their peaceful protests. (See John Grant’s article on the arrest of Iraq War veteran Emily Yates.)

When Richard Nixon attempted to bum-rush the Shafer Commission into assailing cannabis consumption, he told the Commission’s chair that it was “terribly important” that the Commission does not appear as “just a bunch of do-gooders.”

History is clear that the Shafer Commission did a public good by conducting what most experts acknowledge is the most comprehensive examination of marijuana ever performed by the U.S. Government.

Current pot prohibitionists march under the tattered banner raised by one of the most despised politicians in American history – Richard “Tricky Dick” Nixon.